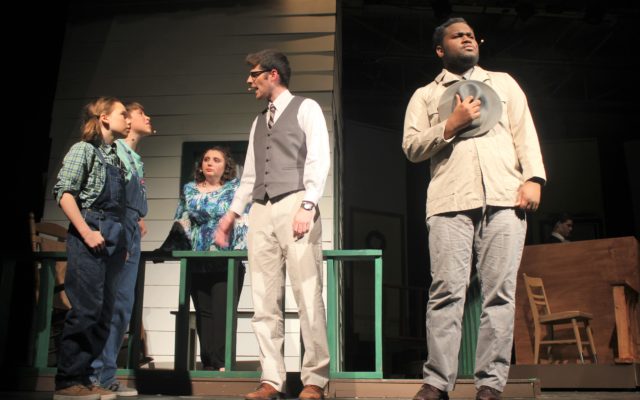 Jessica Potila, SJVT / FhF Staff Writer • April 17, 2019
During her relatively short time living in northern Maine, Caryn Cleveland Short has helped to strengthen the University of Maine at Fort Kent theater program by directing numerous community plays, the latest of which, “To Kill a Mockingbird,” wrapped up on Saturday.

FORT KENT, Maine — During her relatively short time living in northern Maine, Caryn Cleveland Short has helped to strengthen the University of Maine at Fort Kent theater program by directing numerous community plays, the latest of which, “To Kill a Mockingbird,” wrapped up on Saturday.

Cleveland Short said she deemed her latest play a success, thanks to those who participated in the production.

“Every performance, I am stunned by this company. The actors, in spite of school, family and work have spent hundreds of hours rehearsing or memorizing lines,” Cleveland Short said. “The technical crew ably led by Aaron Bernstein has devoted a similar amount of time. Creativity was unleashed. It has been a labor of love to bring this work to the UMFK stage.” 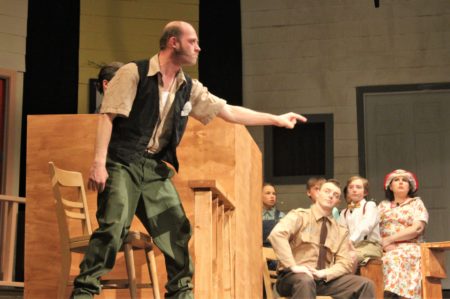 John Kilcollins channels his character Bob Ewell, during a dramatic courtroom scene of “To Kill a Mockingbird,” performed at the University of Maine at Fort Kent Fox Auditorium on Thursday, April 11.
(Jessica Potila)

“To Kill a Mockingbird,” was the last play Cleveland Short will direct at UMFK. She is the wife of UMFK President John Short, and will leave the area this summer along with her husband who is retiring from his post in June.

During the three years the couple lived in Fort Kent, Cleveland Short also directed local performances of “Twelve Angry Jurors,” “Bus Stop,” “The Importance of Being Earnest,”  “The Diary of Anne Frank,” and “A Few Good Men.” She also assisted Director Doug Clapp of Fort Kent Community High School with his successful production of the musical “Annie,” and performed in two UMFK Summer Theater shows, which Bernstein directed.

As with all of the plays Cleveland Short directed at UMFK, the cast of “To Kill a Mockingbird,” included community members from elementary school students to older adults who have a passion for theater.

“There was huge talent on that stage,” Cleveland Short said, including John Kilcollins of Fort Kent, who played the abusive racist Bob Ewell in “To Kill a Mockingbird.”

Kilcollins, 34, said he is thankful for the opportunity he had to experience acting in Cleveland Shorts productions.

“It has been such a pleasure to work with and get to know Caryn Short. I have played a plethora of characters in her productions, including a forgotten old juror, an old cowboy saying goodbye to his ward, and one of the most hated characters in literature (Ewell),” he said. “Fort Kent has had a vibrant summer theatre program for quite some time now, which I am ecstatic and proud to have been a part of, but during Caryn’s time here she has expanded upon that. Students who were never around during the summer have gotten involved as well as community members that for one reason or another were not exposed to our summer theatre program.”

Among the players in “To Kill a Mockingbird” were mother and son Melanie Hartt and Daniel Morgenthaler of Wallagrass. 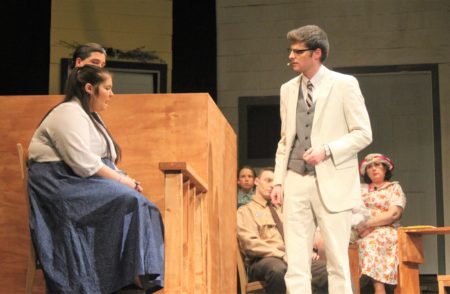 Adam Wilcox as Atticus Finch cross examines the dishonest Mayella Ewell, played by Kala Grant, during a performance of “To Kill a Mockingbird” at the University of Maine at Fort Kent Fox Auditorium on Thursday, April 11.
(Jessica Potila)

Morgenthaler, 12, played the part of Dill in his first major acting role.

“Being on the stage feels something like being nervous and excited at the same time, and I am happy that I can do this kind of stuff,” he said.

Hartt, 44, has been involved with theater at UMFK for the past 30 years, and is a regular performer in UMFK Summer Theater productions. She said acting with her son in “To Kill a Mockingbird,” was an experience she will always cherish.

“For me, it gives me a chance to reflect on all of the opportunities that were given to me in my teens. I’ve had such talented mentors over the years and I am so thankful that my son now has a community in which he can explore his own creative expression,” Hartt said. “I’m so glad that Caryn Cleveland-Short envisioned him in his role as “Dill” because it has sparked his excitement for theater.”

Junior UMFK nursing student Adam Wilcox played the lead role of Atticus Finch in the latest production and has also performed in many of the other plays Cleveland Short directed.

“It was great to show off all of our hard work. It is clear that the community is so supportive of the performing arts at UMFK and that is encouraging,” Wilcox said.

Cleveland Short said she also appreciates the community, including audience members, for their contributions to the local theater scene. She said she will miss the cast and crew members she worked with over the past three years.

“Thanks to all our theater community for the amazing work and support. It has been my privilege to work with such creative people; I am humbled,” she said.

Only one member of Maine’s congressional delegation had come out in favor of impeaching President Donald Trump ahead of House Speaker Nancy Pelosi’s Tuesday announcement that the Democratic-led House of Representatives would begin an impeachment inquiry.
Apex Weather END_OF_DOCUMENT_TOKEN_TO_BE_REPLACED

A strong upper-ridge anchored off the Southeastern US coast will bring warmer and more humid than normal conditions to the Valley through the late week period.
Campaign Corner END_OF_DOCUMENT_TOKEN_TO_BE_REPLACED

Dale Crafts filed his nomination papers for Feb. 21 with the Secretary of State to officially be placed on the primary ballot on June 9, 2020, for the U.S. House of Representatives 2nd District race.
Our Sponsors END_OF_DOCUMENT_TOKEN_TO_BE_REPLACED