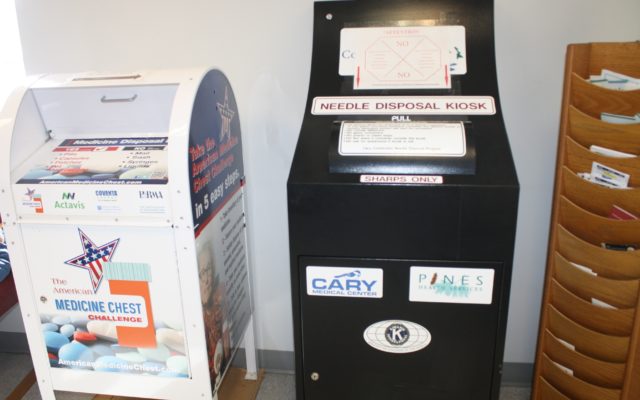 Melissa Lizotte • April 16, 2019
Police departments across Aroostook County are giving folks the opportunity to dispose of their unwanted or expired prescription drugs, over-the-counter or veterinary medications as part of National Drug Take Back Day on Saturday, April 27.

Police departments across Aroostook County are giving folks the opportunity to dispose of their unwanted or expired prescription drugs, over-the-counter or veterinary medications as part of National Drug Take Back Day on Saturday, April 27.

Every April and October, the U.S. Drug Enforcement Agency holds National Drug Take Back Day from 10 a.m. to 2 p.m. on designated dates to promote public safety and educate people about the dangers of potential drug overdoses.

Presque Isle Police Chief Laurie Kelley said that her department has participated in National Drug Take Back Day since its beginnings 16 years ago. But even if people cannot come by on April 27, they can drop off unused medications and needles 24/7 at the police station and place them in special kiosks. Staff members then store the medication in boxes until members of the Aroostook County sheriff’s office collect them to send to a state disposal facility.

Last year, the Presque Isle Police Department collected 562 pounds of unused medications in 21 boxes during the October 2018 Drug Take Back Day. That day, organizers collected 27,157 pounds worth in 1,072 boxes statewide.

Kelley noted that the national movement is a good opportunity to teach community members about the dangers of keeping expired or unused medications in their homes. Children can accidentally overdose and others might also be tempted to steal medications and could overdose.

“We’ve done a program before where we showed children a box of candy and a box of prescription medications to show them how similar they look,” Kelley said. “It was a way to teach them to think before they eat something they’re not sure about.”

The Houlton Police Department is partnering with Adopt-a-Block of Aroostook to host National Drug Take Back Day and provide volunteers to assist residents with drug disposal. Folks who are unable to come to the police station can leave their box of medications at their door for volunteers to pick up.

Houlton police chief Tim DeLuca said that the department has been conducting a Facebook campaign about Drug Take Back Day and will release a special public service announcement soon. Like many departments, Houlton also offers 24/7 drug and needle kiosks for drop-offs.

In October 2018, the Houlton Police Department collected 393 pounds of unused medications in nine boxes while the sheriff’s office collected 50 pounds worth.

“It’s important for us to be able to offer this service to our community 365 days a year,” DeLuca said.

High pressure will bring mostly clear to partly cloudy skies to northern Maine today and tonight as low-pressure slides east of the region in the southern part of the state.
Campaign Corner END_OF_DOCUMENT_TOKEN_TO_BE_REPLACED

Dale Crafts filed his nomination papers for Feb. 21 with the Secretary of State to officially be placed on the primary ballot on June 9, 2020, for the U.S. House of Representatives 2nd District race.
Our Sponsors END_OF_DOCUMENT_TOKEN_TO_BE_REPLACED