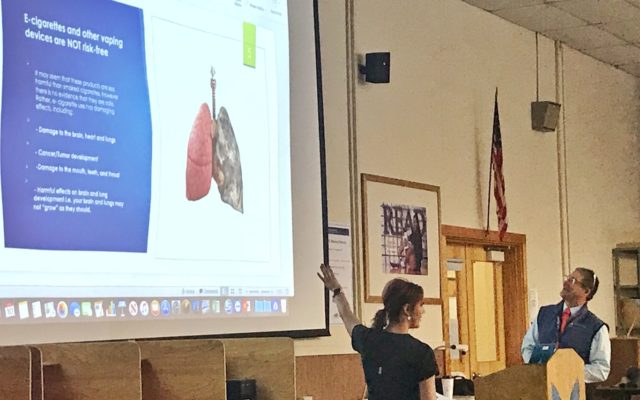 Two representatives from Fish River Rural Health in Madawaska spoke to 7th and 8th graders at the Madawaska Middle High School Wednesday morning about the dangers of vaping.

Vaping was introduced about a decade ago as an alternative to cigarettes for adults who were trying to quit smoking. The battery operated devices used to vape heat up a flavored nicotine liquid into a vapor that can be inhaled.

The most recent popular product that Valley school officials have seen students use is the Juul, a small device that looks much like a USB drive, but contains the same amount of nicotine as a pack of cigarettes.

Jennifer Malmborg, a registered nurse and behavioral health/substance use case manager, and Doug Levesque, a licensed clinical social worker, gave a short presentation about the dangers of vaping that young students might not have otherwise understood.

“One in six high school students have used in the last 30 days,” Levesque said.

Since last year, Maine law prohibits anyone under the age of 21 possessing, using, selling or distributing any nicotine or tobacco products, including e-cigarettes. Part of the reason for the legislative change was to make it more difficult for high school students and potential smokers to obtain tobacco or e-cigarettes from their 18-20-year-old friends who could buy them. Anyone who turned 18 by July 1, 2018, however, is grandfathered under the new law and still able to by tobacco products and e-cigarettes.

Maine lawmakers also have introduced bills this session to restrict the marketing of e-cigarettes to both children and adults, and to ban the possession and use of electronic smoking devices on school grounds by both students and staff statewide.

One of the health risks associated with vaping involves a condition called popcorn lung, which damages the lungs’ smallest bronchial airways and makes the sufferer cough and feel short of breath.

“[Popcorn lung] is one of the most popular internet searches around vaping,” Malmborg said, adding that the chemicals released are done in an aerosol fashion, much like the aerosols found in hairspray.

“You can get lung cancer from vaping,” she said. “If you’re someone who thinks that vaping won’t damage your lungs, you’re wrong.”

The trouble many parents and school officials face is the marketing techniques used by companies like Juul to promote the sweet flavored liquids to be inhaled. Flavors like cotton candy, bubblegum, and creme brulee entice younger students to use the products, many of which contain nicotine. Even if they don’t have any nicotine, vaping liquids can contain other hazardous substances — including some labeled by the U.S. Food and Drug Administration as safe to eat, though not safe to inhale.

“It is sold as an adult drug, but with flavors like bubblegum, who are they really targeting?” Levesque asked. “And when it becomes an addiction, you’re not in control anymore.”

Madawaska Middle High School Principal Wayne Anderson said that the addictive feeling is “hard to explain to someone who has never been there, how hard it is to stop.”

Anderson said he has students who have told him in the past that they can stop vaping when they want to, but that these same students strive to make a trip to the bathroom 12-14 times a day just to “take a hit of that juul.”

“At that point, it’s the drug that’s in charge, not you anymore,” Anderson said. “If nothing else, don’t ingest any kind of chemical in your body that doesn’t belong there, there is no benefit for you.” 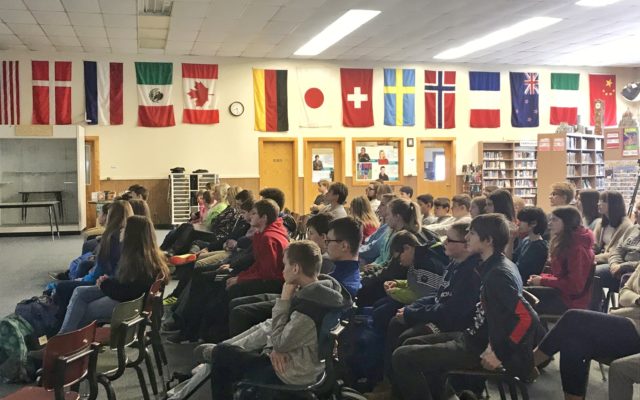 As the Maine Turnpike expects 1 million travelers alone over the Labor Day weekend, policymakers are gearing up for a sprint to solve one of the state’s most intractable problems: a long-standing — and growing — transportation funding gap.
Apex Weather END_OF_DOCUMENT_TOKEN_TO_BE_REPLACED

A cold front moved through the Valley early this morning, and it will be followed by an Arctic cold front this afternoon.
Campaign Corner END_OF_DOCUMENT_TOKEN_TO_BE_REPLACED

Tomorrow, Saturday, Nov. 3, 2018, U.S. Senator Angus King (I-Maine) will continue his Get Out the Vote initiative in Aroostook County.
Our Sponsors END_OF_DOCUMENT_TOKEN_TO_BE_REPLACED