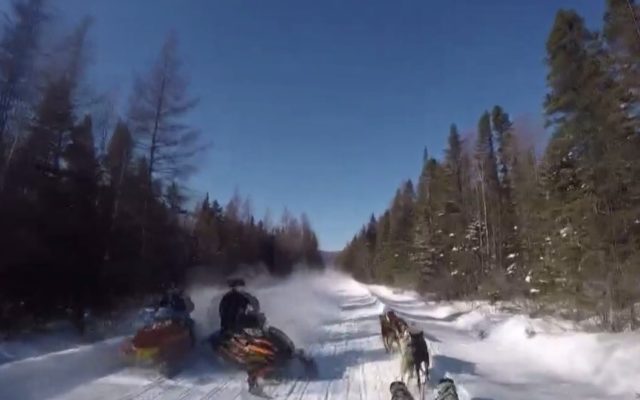 Mushers and snowmobilers need to work together to keep trails safe

Jonathan Nathaniel Hayes, Special to the Fiddlehead Focus • April 8, 2019
“I sadly can’t do it anymore. I am retiring from dogsled racing. Ever since the accident I’ve lost my nerve. I am in fear. I don’t have it anymore..."

“I sadly can’t do it anymore. I am retiring from dogsled racing. Ever since the accident I’ve lost my nerve. I am in fear. I don’t have it anymore…”

These are the sad words that longtime Maine musher, Jeffrey McRobbie posted on social media in late March.

I also have been mushing the winter trails in Maine for a long time, about 20 years now.

I’d say 99 percent of snowmobilers are glad to see something as interesting as a dogsled team on the trail. They slow down or come to a complete stop. Some even turn off their machines (a kind but unnecessary gesture). They give a thumbs up or nod in praise of our traditional form of transportation. Many ask us to wait while they pull out their phones for pictures — which I always do. Sometimes, if my team is calmed down, I’ll even let the tourist snowmobilers “from away” pose with my teams.

And we mushers love snowmobilers and their clubs — and their groomers. Without them it would be so much more difficult to get the needed training miles in for our small-time racing teams that can’t afford our own tracts of land, groomers and private trails. I can also say that snowmobilers once assisted me in catching up to a loose team in my early days of mushing. 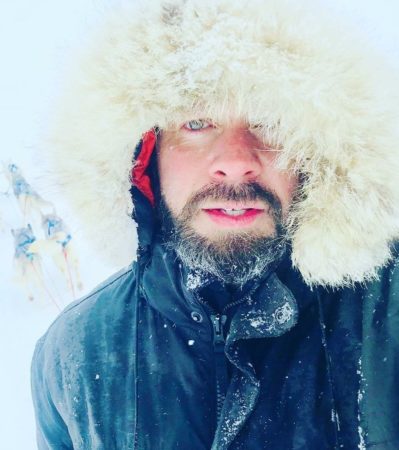 I often encourage mushers to join and support local snowmobile clubs. My country band is always eager to accept gigs for club fundraisers.

All that said — there is still the 1 percent of snowmobilers who cause problems..

I often pass 50 or more snowmobilers in a day out on the trail. Which means, on average, every couple of training runs I meet up with the 1 percent. The 1 percenters are the ones who despise anything that causes them to check their full-throttle speed. They are the ones that fly by, within a foot of our teams, intentionally and wide open, because, “We shouldn’t be on their trails.”

This mentality is akin to someone pulling up next to an Amish family in their horse drawn cart and smoking the tires. It is ignorant. But this 1 percent keeps mushers in fear on the trail. Not for ourselves only, but for our dogs.

Legally, snowmobilers are to yield right of way to other users of the trails — snowshoers, cross country skiers and dog teams. “Why?” For the same reason motorists are to yield the right of way to people on horses on the road — because it is presumed that the driver has more control of his motorized vehicle than someone using animal transportation.

But most mushers don’t take the chance and assume that snowmobilers are going to be courteous. We assume — for our dogs’ sakes — that every snowmobile is manned by someone in that 1 percent until we see evidence that it is not.

I can count about 5 times in my mushing career that I’ve had true near misses. In one such incident, about 10 years ago, I was doing a 20 mile loop and was out between Cross and Mud lakes, heading back toward St. Agatha.

Most of this loop was straight trails and open fields. But this section always made me pray. It is thick conifers and twisty curves and high traffic.

On this particular day I could hear the sled coming about 2 minutes before he got to me. The machine was wide open. I did the only thing I could do. I got around the corner, stopped my team, and pulled over as much as I could with 8 dogs in front of me and waited.

The snowmobiler came around the corner as fast as he could without losing control. He saw me and locked up his tracks, but it was too late. Everything was moving in slow motion in my mind, though my brain quickly did the calculation — his sled was going to come to a stop about halfway through my team of dogs.

But some strange miracle occurred. My dogs did something I have never seen them do before or since. My first four dogs sprung like cats off the trail and into the conifers at the very last moment and the sled stopped right where my lead and point dogs had been standing.

The snowmobiler and I just stared at one another — stunned — for what seemed to be half a minute (but I am sure it wasn’t so long). Finally we both just shook our heads in disbelief without a word and he slowly pulled away.

Other mushers, however, have not been so lucky.

No Maine musher can forget the story of fellow Mainer, Stephen Hessert, who was out training his dog team in 2003, when he was struck from behind by a drunk snowmobiler. The snowmobiler left him for dead on the trail with two broken legs and other injuries. Hessert pulled himself into his sleeping bag before falling unconscious. He was found, hospitalized and had titanium rods inserted in both legs. Police located and charged the snowmobiler about three week later.

Last year, during the Iditarod, a drunken snowmobiler repeatedly attacked two famous mushers, Jeff King, and Aily Zirkle, out on the trail.

In 2016, during the Can Am Crown International Sled Dog Race in Fort Kent, fellow Mainer, Jeffrey McRobbie was struck by a snowmobiler who’d lost control of his sled due to excessive speed on a straight, flat portion of the trail called “the railroad bed.” He suffered multiple injuries.

McRobbie returned to race at the Can Am, competing and finishing the 30-miler in 2018. But this year, he announced on his Facebook page at the end of March that he no longer has the nerve to race.

“I sadly can’t do it anymore. I am retiring from the dogsled racing. Ever since the accident, I’ve lost my nerve. I am in fear. I don’t have it anymore. I’ve lied to myself and others thinking I can, I want to soooooo bad. The talk is there! The will is there! The desire is there! But I can no longer back it up … I couldn’t take my foot off the brake, and was ready to bail out with every snowmobile … I’m all messed up when I hit the railroad bed. So with a heavy heart, lots of good memories, I say goodbye to being a sled dog racer,” McRobbie posted.

So what can we do? Here are some suggestions:

Mushers: Get involved with your local snowmobile club. At least become a dues paying member. If you use their trails it’s the least you can do. And your continued support at club events will subconsciously keep our teams in their minds.

Snowmobilers: We as mushers value and appreciate you. We love sharing the trails with you. We love adrenaline as much as you do. There’s a time and a place to open your sled up and see what it’s got. When you give the throttle to it, though, please do so where it is safe for you and others.

It might not be a dog team around the corner or on the other side of your buddy’s cloud of snow. But it could be an oncoming sled, a moose, a deer, a child.

We mushers know that 99 percent of you are responsible people. Please help us spread the word about the shared trails. Have that conversation with your riding buddies and, who knows, perhaps we can turn that 99 percent into 100 percent.

Jonathan Nathaniel Hayes is a former U.S. Marine and Forest Ranger, who currently runs a dog kennel out of Frenchville. He is the author of three books: “Mush: Leadership Lessons Learned from a Lead Dog,” “A Mix of Mud and Stardust,” and “The Chivalric Code,” and has a children’s book, “The True Tails of Togo the Sled Dog” due to be released this summer. Hayes has been mushing his team of rare Seppala Siberian sled dogs in Maine for nearly two decades.

As the Maine Turnpike expects 1 million travelers alone over the Labor Day weekend, policymakers are gearing up for a sprint to solve one of the state’s most intractable problems: a long-standing — and growing — transportation funding gap.
Apex Weather END_OF_DOCUMENT_TOKEN_TO_BE_REPLACED

A cold front moved through the Valley early this morning, and it will be followed by an Arctic cold front this afternoon.
Campaign Corner END_OF_DOCUMENT_TOKEN_TO_BE_REPLACED

Tomorrow, Saturday, Nov. 3, 2018, U.S. Senator Angus King (I-Maine) will continue his Get Out the Vote initiative in Aroostook County.
Our Sponsors END_OF_DOCUMENT_TOKEN_TO_BE_REPLACED