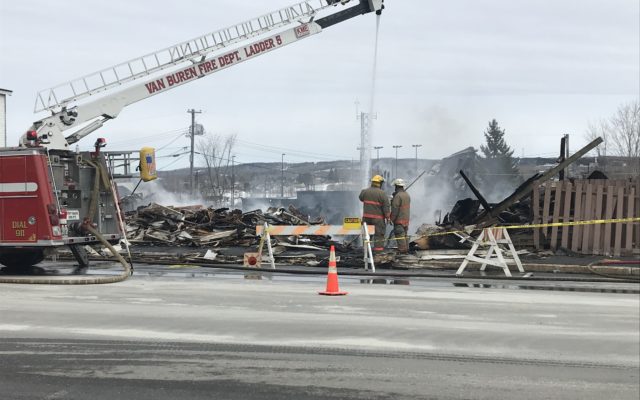 Morgan Mitchell • April 8, 2019
Monday marked the second day that firefighters worked to snuff out the smoldering remains of a fire that leveled two downtown buildings, including the former home of the iconic Hebert Rexall Pharmacy, in Van Buren on Sunday.

Monday marked the second day that firefighters worked to snuff out the smoldering remains of a fire that leveled two downtown buildings, including the former home of the iconic Hebert Rexall Pharmacy, in Van Buren on Sunday. 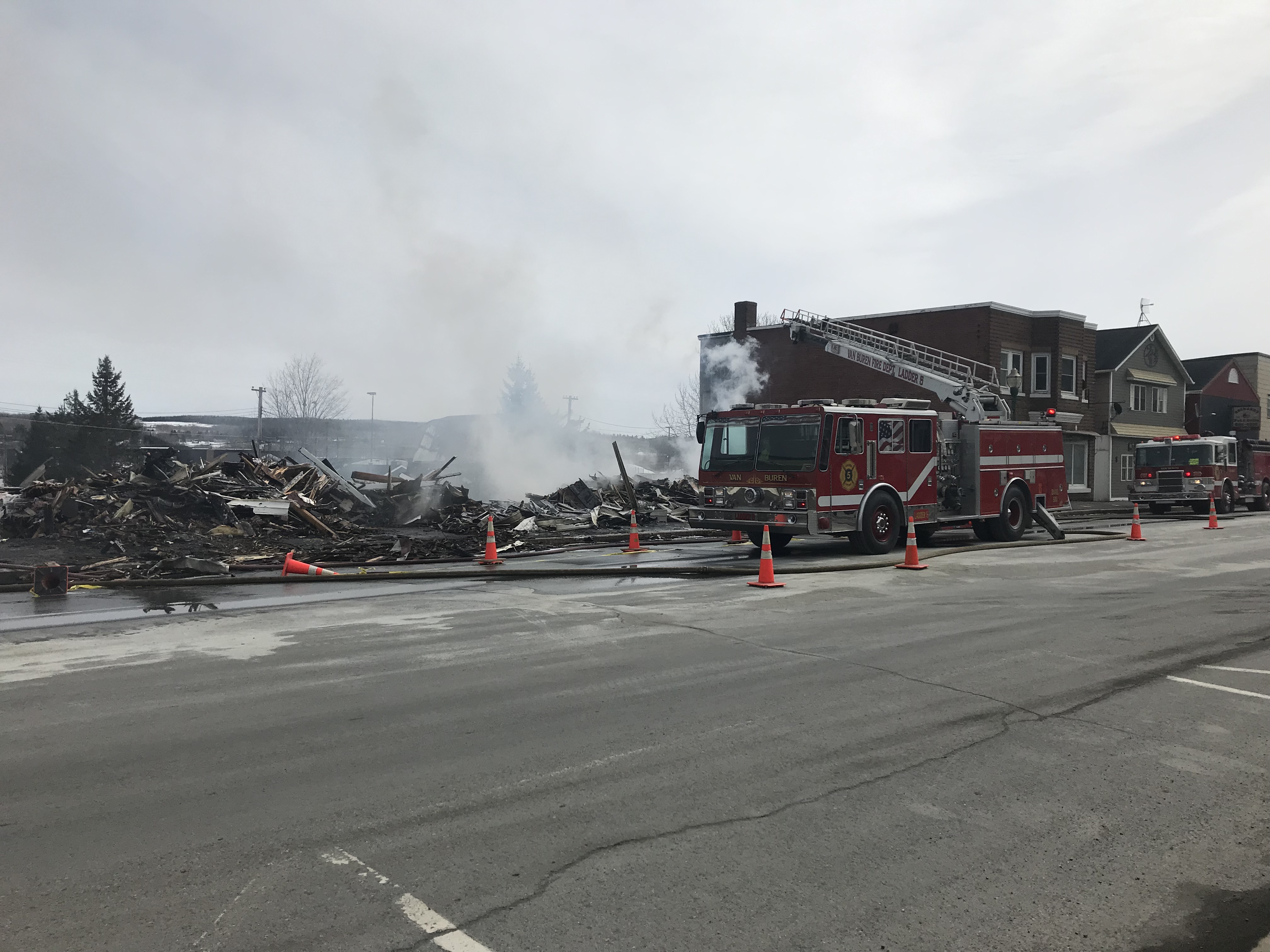 This smoldering debris is what remains Monday of two buildings at 72 and 74 Main Street in Van Buren that a fire destroyed Sunday. (Morgan Mitchell | SJVT/FhF)

The fire at 72 and 74 Main Street, which was reported at about 9:30 a.m., caused officials to shut off power and close off the downtown Sunday as about 60 firefighters from Van Buren, Grand Isle, and Limestone, and from across the St. John River in St. Leonard, New Brunswick, kept pouring water onto the structures to prevent the fire spreading to neighboring buildings.

They succeeded in stopping the flames from spreading, but a couple of firefighters from Van Buren remained Monday to keep dousing the embers and smoldering ashes. Van Buren Fire Chief Brian Caron said that a collapsed metal roof was trapping in heat and stoking smoke from the debris. There were no reported injuries.

Power has since been restored to the north side of Main Street and businesses up the street were open.

Caron said the fire appears to have originated from the basement of the former Ezzy insurance building at 72 Main Street. He said he couldn’t tell exactly what caused it but that there were no signs of anything suspicious that he could tell from the rubble. The state fire marshal’s office has been called in to investigate just the same.

“It’s just normal protocol when we get a fire this size, we can investigate the fire to an extent, but we don’t have the training that the fire marshal has,” Caron said. “So we are going to let the professionals handle it … once the fire is completely out, we will just help the owners of the buildings as much as we can.”

One of the two residents who rented apartments in the 72 Main Street building owned by Spencer Ouellette was home when the fire started and called 911. She was able to get out unharmed. The other resident was not home. Firefighters managed to save a cat from the second floor apartment, according to Caron.

Residents of neighboring buildings were evacuated Sunday to ensure their safety as firefighters worked to contain the fire.

The fire also destroyed the building at 74 Main Street, where the Hebert Rexall Pharmacy used to be. The pharmacy moved to 31 Main Street in June of 2018 and the old building, which was still owned by the Heberts, then housed a martial arts studio.

Bill Fuller, who operated the Northern Ninja Dojo, wouldn’t talk Monday but directed students and others to his Facebook page.

“We do plan on rebuilding so everyone please bare with us as we sort through what needs to be done,” Fuller wrote on Facebook, where he left instructions on where students would meet for classes for the time being. “Thank you to everyone who has reached out to myself and my brother, this is a very hard hit for us in more than one way, but have no fear the Fuller boys don’t stay down, we are ninja, perseverance is in our blood and our hearts.”

Van Buren Town Manager, Nancy Troeger, who was busy with jury duty on Monday, said in an email late that afternoon that the town “has every intention of working with both owners as they look to the future.”

United Insurance account manager and sister-in-law of Spencer Ouellette, Lilly Ouellette said John Hebert is known for his philanthropic ways and all of the things he has done for the Van Buren community.

“If his pharmacy had still been there, it would have been an even bigger loss,” she said.

John Hebert was busy at work Monday but stated in an email that his grandfather bought the building and an existing pharmacy at 74 Main Street in 1942. The grandfather reopened Findlen Drug after a brief 5 month closure.

“Prior to that closure, prescriptions had been filled at that location since 1903. Herbert Hackett, the Valley’s first licensed pharmacist, rented the building in 1903,” Hebert wrote in his email. “With the exception of that 5 month closure in 1942, prescriptions were filled in an unbroken line until June 24, 2018, when we moved to our current location.”

The name changed to Hebert Rexall in 1976.

While the building was insured, Hebert said there were still a lot of historical items in the old building, including the soda fountain and its fixtures, and that his family also used the second story for storage.

“We are very sad to have lost our historic pharmacy, but are blessed and thankful to be a part of such a supportive community. The outpouring of support has been tremendous,” Hebert wrote. “People have been coming in and calling and sharing their unique memories which is helping provide my family and staff solace.”