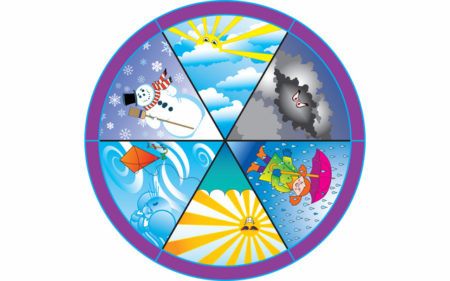 High pressure will crest over the region today and move east tonight. Mostly clear to partly cloudy skies and southwest flow will allow temperatures to moderate today and tomorrow. A warm front to the north will graze the Valley bringing increased clouds this afternoon. A cold front and embedded low pressure area will approach Thursday with increasing clouds and rain showers by the afternoon. Cooler temperatures overnight will allow precipitation to change to snow showers before tapering off Friday morning; little to no accumulation expected with any snow.

Clouds will increase early Saturday as another low pressure system and cold front approaches from the west while the previous cold front stalls out along the Downeast coast. Snow in the morning and early afternoon will change to all rain later with rain continuing through Sunday night as the cold front slowly moves through. Rain will taper to snow showers Monday before tapering off. High pressure will build in later Monday through Tuesday.

Thursday, March 28
Partly cloudy with a high near 45. South wind 10 to 15 mph gusting 30 to 35 mph over higher terrain. Increasing clouds in the afternoon with a 40 percent chance for rain showers. Less than 0.05 inch precipitation expected. Thursday evening, cloudy with a 60 percent chance for rain showers changing to snow showers after midnight. Between 0.05 and 0.10 inch precipitation expected. Low near 30 with south wind 5 to 10 mph shifting to the west/northwest after midnight.

Friday, March 29
Mostly cloudy early with a 30 percent chance for snow/rain showers tapering off in the morning. Becoming partly cloudy in the afternoon with a high in the low 40s. West/northwest wind 0 to 5 mph. Friday night, partly cloudy with a low in the lower 20s. Chance for snow showers 30 percent. Light northeast wind expected.

Monday, April 1
Mostly cloudy with a high in the mid-30s. A 30 percent chance for morning snow showers ending as rain showers in the afternoon. Northwest wind 8 to 14 mph. Monday night, partly cloudy with a low in the lower 20s. Light west wind.

As the Maine Turnpike expects 1 million travelers alone over the Labor Day weekend, policymakers are gearing up for a sprint to solve one of the state’s most intractable problems: a long-standing — and growing — transportation funding gap.
Apex Weather END_OF_DOCUMENT_TOKEN_TO_BE_REPLACED

A cold front moved through the Valley early this morning, and it will be followed by an Arctic cold front this afternoon.
Campaign Corner END_OF_DOCUMENT_TOKEN_TO_BE_REPLACED

Tomorrow, Saturday, Nov. 3, 2018, U.S. Senator Angus King (I-Maine) will continue his Get Out the Vote initiative in Aroostook County.
Our Sponsors END_OF_DOCUMENT_TOKEN_TO_BE_REPLACED