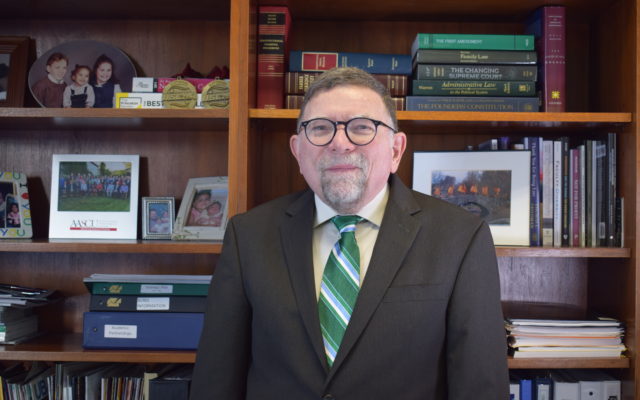 Jessica Potila, SJVT / FhF Staff Writer • March 7, 2019
University of Maine at Fort Kent President John Short announced on March 7 his plans to retire at the end of the academic year. Students and staff at the university said they are sad to see Short, and his wife, Caryn Cleveland Short leave.

FORT KENT, Maine — University of Maine at Fort Kent President John Short announced on March 7 his plans to retire at the end of the academic year. Students and staff at the university said they are sad to see Short, and his wife, Caryn Cleveland Short leave.

“While my wife Caryn had a great recovery from her heart attack and triple bypass surgery, that experience led us to look a bit differently about mortality and the things that matter the most in life,” Short said. “Last year we looked at places for our eventual retirement and we chose southern Delaware, near the Delaware beaches and close to family. We bought a house which became our vacation home and that will be our home in retirement.”

Short has served as UMFK’s president since April 2016, advancing several initiatives important to the campus, its students and the community. He will continue to serve through June 30, the end of the fiscal year.

”The UMFK nursing faculty and staff are thankful for the effort and unwavering support Dr. Short provided to help grow and expand the nursing program,” said Erin Soucy, interim associate provost for academic affairs and dean of undergraduate nursing at UMFK. “Dr. Short leaves UMFK in a position to move successfully into the future. Dr. Short and his wife, Caryn Cleveland Short, will be missed.”

Cleveland Short has made a significant mark on the local theater scene, reinvigorating interest in the performing arts, and advancing theater opportunities for youngsters in the area.

“Caryn will be sorely missed by the local performing arts community,” said Aaron Bernstein, UMFK director of media services and director of the UMFK summer theater program. “Her enthusiasm and infectious energy enliven all of her productions, and she has a rare talent for outreach. She’s gotten people of all ages involved in theatre, and her legacy will be a whole generation of students and community members who have taken the stage for the first time because of her efforts.”

One UMFK student said he has been positively impacted by both the president and his wife.

“Although I am saddened to see Caryn and President Short go, they have helped me through some of the most trying times in my young adult life,” said UMFK nursing student and actor Adam Wilcox. “Caryn and John were so welcoming when I first came up to UMFK. This made the adjustment to college life so much easier. Caryn provided me with knowledge and advice that has helped me grow as a leader, nurse, and actor.”

Short and Cleveland Short said they also have been positively affected by their time spent serving the St. John Valley community.

“Caryn and I have made many friends and met many unique individuals whom we will miss. And living on the Canadian border, with Fort Kent’s access to Canada, has been so rewarding and enriching,” Short said. “Very importantly, I will miss the faculty, staff and students at UMFK who have had such a positive impact on  our lives while we have been here. Residents of this area care deeply about their community and will literally do anything to make the community better.”

“The people of Fort Kent have been warm, inclusive and made me fall in love with this area,” Cleveland Short added. “We do have close friends here, but the theater troupe and all the foks helped make theater have a renaissance here. I will miss those people sorely. I am torn about leaving. I have many memories so I can keep the area in my heart.”

The area also will keep another piece of the couple’s heart, at least for the time being.

“Lexi is graduating and has been accepted to UMFK. She loves it here and although offered many scholarships, she wanted to stay here,” Cleveland Short said.

Short retires after more than 40 years of scholarship and higher education leadership.

Three candidates are vying for two seats on the Fort Kent Town Council. Voters will decide which of the three -- Corey Pelletier, Brandon Dayton or Andrew Caron -- will get a seat during the town’s annual election on Monday, March 22.
Apex Weather END_OF_DOCUMENT_TOKEN_TO_BE_REPLACED

A warm front lifting across the region this morning will lead to increasing clouds with snow overspreading the area later this morning. A cold front will move through this afternoon with snow likely for a period before tapering off behind the front this evening with overnight lows occurring relatively early around midnight.
Our Sponsors END_OF_DOCUMENT_TOKEN_TO_BE_REPLACED