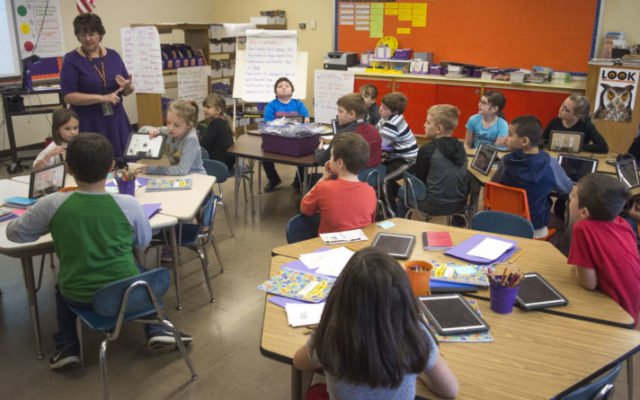 Robbie Feinberg, Maine Public • March 5, 2019
Since her time on the campaign trail, Gov. Janet Mills has been vocal about her desire to increase teacher salaries in Maine.

Since her time on the campaign trail, Gov. Janet Mills has been vocal about her desire to increase teacher salaries in Maine.

Mills included an extra $10 million in her budget to boost starting teacher pay to $40,000 a year. At the same time, state lawmakers are considering several separate measures of their own, which they say could help solve the state’s ongoing teacher shortage.

Maine’s teacher salaries are lower than those in many other states. Two years ago, average teacher pay in Maine was about $51,000 — nearly $8,000 less than the national average. Pay for beginning teachers in Maine was only above eight other states, according to a 2017 report from the National Education Association.

On Monday afternoon, legislators took public comments on a series of bills aimed at improving those numbers. One proposal, from Democratic Rep. Victoria Kornfield of Bangor, would increase the minimum teacher salary from $30,000 to $40,000 per year beginning in 2020.

“If we value education, then we need to pay teachers a professional, livable, respectable wage,” she said. “Teachers are using their own money to buy resources for their classroom. They often need to get second jobs to pay their bills. And many cannot afford to live in the communities where they teach.”

And other supporters, such as Winslow Elementary School teacher Patty Scully, said increasing teacher salaries could help to entice new educators to the profession and relieve a shortage of teachers in some districts around the state.

Scully cited the frustrating search for a candidate to fill a recent elementary teacher opening in her district.

“We advertised. We called the colleges. We advertised again. And still did not find a single person for a third-grade teaching position,” she said.

Kornfield’s bill would increase state aid to schools to subsidize raises for teachers who are currently earning less than $40,000. And that could add up to become a substantial amount. A fiscal review of a similar bill in 2017 estimated the cost of that increase to be more than $14 million at the time.

No one testified against the measure. But Republican state Rep. Matthew Pouliot of Augusta repeatedly questioned speakers about funding. He and other legislators said they are concerned that the bill would only increase the minimum salary to $40,000, but wouldn’t boost pay for other, veteran teachers.

Officials with the Maine School Superintendents Association and Maine Principals Association said they share that concern, though both still testified in support of the bill. MPA President Dick Durost said increasing just the minimum salary could affect the morale of veteran teachers.

“As well as potentially further driving those 5-, 7-, 9-year veterans that are making just $40,000, or above, to look to move to those more affluent communities that could pay more,” he said.

Other legislators proposed an even bigger hike for minimum salaries, up to $50,000. Lawmakers have proposed increasing teacher pay in past sessions as well, though a 2017 proposal died in the Legislature.

This year’s measure may have a better shot, though, given Mills’ support as reflected in her tax and spending plan. Separate from those budget negotiations, though, legislators will likely continue to work on their own teacher salary proposals at a work session in the coming weeks.

Only one member of Maine’s congressional delegation had come out in favor of impeaching President Donald Trump ahead of House Speaker Nancy Pelosi’s Tuesday announcement that the Democratic-led House of Representatives would begin an impeachment inquiry.
Apex Weather END_OF_DOCUMENT_TOKEN_TO_BE_REPLACED

A strong upper-ridge anchored off the Southeastern US coast will bring warmer and more humid than normal conditions to the Valley through the late week period.
Campaign Corner END_OF_DOCUMENT_TOKEN_TO_BE_REPLACED

Dale Crafts filed his nomination papers for Feb. 21 with the Secretary of State to officially be placed on the primary ballot on June 9, 2020, for the U.S. House of Representatives 2nd District race.
Our Sponsors END_OF_DOCUMENT_TOKEN_TO_BE_REPLACED