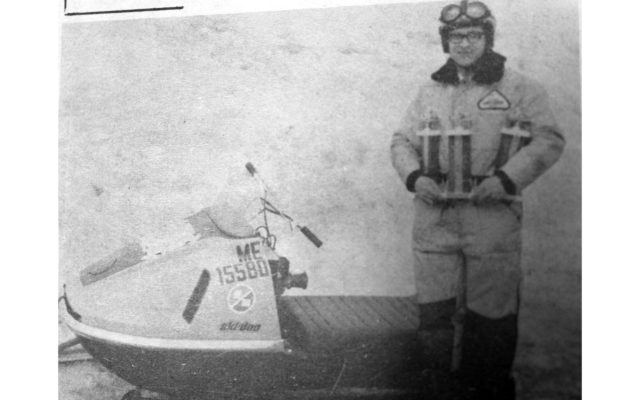 Vandals Best “Music Fighters” — The Vandals won the best band sound at the Jaycee-sponsored battle of the bands Thursday evening, Feb. 20, at the Madawaska High School Cafetorium. The Vandals received $75 and a trip to Lewiston for a chance to compete in the state finals, March 25.

New Truck Helps Speed Mail — The Van Buren Post Office received a brand new Dodge truck a week ago Tuesday. The new 3/4-ton truck is well equipped for around-the-town driving. It has a magnifying as well as regular rearview mirror and a special mirror on the front to show the driver if any children are close in front of the truck. Postmaster Don Lapointe said the new truck will be used for parcel post deliveries, relays and collections around town.

Frozen Water Pipes Keep Districts Busy — More than twice as many water pipes froze in Madawaska and Fort Kent so far this winter than ever before. As of Thursday morning, a total of 333 water pipes were reported frozen so far in the St. John Valley. Madawaska Water District Superintendent Real Hebert said that last year the district unfroze 161 pipes, breaking a 27-year record. Residents report that water pipes that hadn’t frozen in nearly 50 years froze this year.

Ed Pelletier & Sons Named Top Business — Dave, Mike, Omer and Bob Pelletier of Madawaska shared the spotlight Friday at the Madawaska Chamber of Commerce annual meeting when they were elected Businesspersons of the Year by their fellow chamber members. The co-owners of Ed Pelletier and Sons were visibly moved by the honor.

Pam Cyr Crowned Aroostook Idol –– The crowd gathered at the fifth annual Aroostook Idol competition crowned Pam Cyr of Fort Kent as their champion this weekend after she performed “Why Haven’t I Heard From You,” originally performed by Reba McIntyre, and a unique version of Tina Turner’s ‘Proud Mary’ at the Caribou Performing Arts Center on Sunday.

Only one member of Maine’s congressional delegation had come out in favor of impeaching President Donald Trump ahead of House Speaker Nancy Pelosi’s Tuesday announcement that the Democratic-led House of Representatives would begin an impeachment inquiry.
Apex Weather END_OF_DOCUMENT_TOKEN_TO_BE_REPLACED

A strong upper-ridge anchored off the Southeastern US coast will bring warmer and more humid than normal conditions to the Valley through the late week period.
Campaign Corner END_OF_DOCUMENT_TOKEN_TO_BE_REPLACED

Dale Crafts filed his nomination papers for Feb. 21 with the Secretary of State to officially be placed on the primary ballot on June 9, 2020, for the U.S. House of Representatives 2nd District race.
Our Sponsors END_OF_DOCUMENT_TOKEN_TO_BE_REPLACED