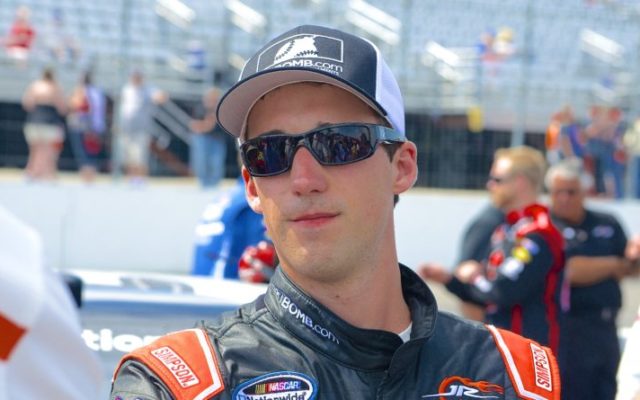 However, Theriault will back behind the wheel on a part-time basis in 2019 as he has landed a multirace deal in the NASCAR Gandor Outdoors Truck Series, formerly the Camping World Truck Series.

Theriault has joined forces with Ricky Benton Racing Enterprises, and he will drive the No. 92 Black’s Tire and Auto Service/Highland Construction Ford 150 for races at Martinsville Speedway, Charlotte Motor Speedway and Bristol Motor Speedway.

The 25-year-old Theriault has been with the team for a month and said he is excited to be back in a truck.

“This is a real opportunity to thrive. I want to make the best of the opportunity,” Theriault said. “There are a lot of short-track racers out there that would love a chance to drive in the truck series.

Theriault said it appears Ricky Benton Racing will race twice at Martinsville, and once each at Bristol and Charlotte.

Theriault has enjoyed a good track record in the truck series. He has run 12 races and posted five top-10 finishes, including two top-fives.

He made his return to the truck series last season for the first time since 2016 and provided the fledgling On Point Motorsports Team with its first top-10 finish. He came home in eighth place after starting 21st in the 32-truck field at the World of Westgate 200 at the Las Vegas Motor Speedway.

Theriault has been working in the RBR Enterprises shop in Cerro Gordo, North Carolina, which is 165 miles from Theriault’s home in Mooresville, North Carolina, familiarizing himself with crew chief Mike Hester and the rest of the team.

“It has been going well. A big part of success in racing is communication and chemistry,” Theriault said.

Ricky Benton Racing has been involved in 80 NASCAR truck series races over the past nine years, and has three top-five and 12 top-10 finishes. Timothy Peters placed seventh in the RBR’s only truck series race last year after Regan Smith notched two top-10 efforts in 13 races in 2017.

Theriault said the RBR Enterprises team may not have the resources of other highly funded teams, but he is convinced the team’s track record and his experience in the truck series can overcome that.

“This team has run well in the past, and I have experience in the series. I’m not going into this blind,” Theriault said. “It’s a work in progress right now.”

Theriault raced only a few times last year after winning the ARCA Series points championship for Ken Schrader Racing in 2017, when he notched a series-high seven wins and 16 top-five showings in 20 races.

“When you go through struggles, it makes you appreciate an opportunity like this,” he said.

“Austin has had a lot of success in his career and came highly recommended [from Schrader],” team owner Ricky Benton said. “He has spent a lot of time at the shop working with [Hester], and the team to get the Daytona truck ready to race and has fit in with what we are doing well. “

“Ricky has done some great things and helped a lot of drivers in the truck series. I think we can build on that this year,” Theriault said.

Only one member of Maine’s congressional delegation had come out in favor of impeaching President Donald Trump ahead of House Speaker Nancy Pelosi’s Tuesday announcement that the Democratic-led House of Representatives would begin an impeachment inquiry.
Apex Weather END_OF_DOCUMENT_TOKEN_TO_BE_REPLACED

A strong upper-ridge anchored off the Southeastern US coast will bring warmer and more humid than normal conditions to the Valley through the late week period.
Campaign Corner END_OF_DOCUMENT_TOKEN_TO_BE_REPLACED

Dale Crafts filed his nomination papers for Feb. 21 with the Secretary of State to officially be placed on the primary ballot on June 9, 2020, for the U.S. House of Representatives 2nd District race.
Our Sponsors END_OF_DOCUMENT_TOKEN_TO_BE_REPLACED