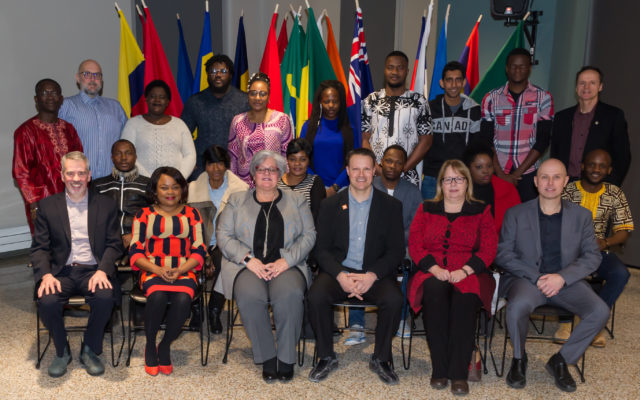 The opening was attended by dignitaries in the colors of the flags of the 40 countries represented in the region, by student, students, college girls, college students and community members.

Practitioners and stakeholders who took the floor noted the importance of open and mix with others, in short, enrich each other in a context of diversity.

The two post-secondary institutions in Edmundston and the Northwest Newcomers Resource Center (CRNANO) combined with new efforts to provide the entire regional population a full agenda. There are almost 100 students, students, schoolgirls and full-time college students this year with the study permit to study in Canada, which is certainly a record attendance for the two institutions.

The activities organized as part of International Week 2019.

All activities of the International Week are free (except international dinner) and open to the public. During the week, shows the storyteller Wahmed Ben Younes and African dance workshops and lively djembe Johanne Philippe and Michel Fortin will be offered in the Northwest schools.

The program of the Northwest International Week is made possible with the financial support of Canadian Heritage and population growth Division of the Department of Post Secondary Education, Training and Labor for New Brunswick.

The upper-level low pressure area that has been parked over southern New England will continue to stall there today into the overnight period then begin to open up and shift southeast into the Atlantic Thursday.
Campaign Corner END_OF_DOCUMENT_TOKEN_TO_BE_REPLACED

Dale Crafts filed his nomination papers for Feb. 21 with the Secretary of State to officially be placed on the primary ballot on June 9, 2020, for the U.S. House of Representatives 2nd District race.
Our Sponsors END_OF_DOCUMENT_TOKEN_TO_BE_REPLACED