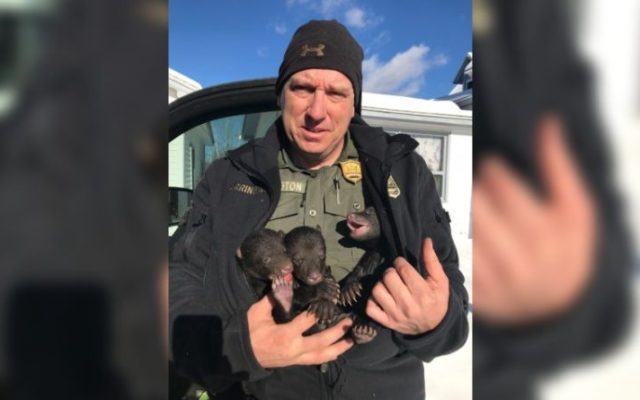 John Holyoke, BDN Staff • February 5, 2019
Three tiny bear cubs are resting peacefully in new dens after their original winter home was disturbed by a logging operation on Thursday, and their startled mother fled.

Three tiny bear cubs are resting peacefully in new dens after their original winter home was disturbed by a logging operation on Thursday, and their startled mother fled.

Maine game warden Paul Farrington responded to the scene in Woodville, which is just south of Medway, after the timber contractor tracked him down to report the incident. The den, which was an open pit called a “ground nest,” was not disturbed, but a piece of machinery passed by close enough to startle the mother bear.

That left three cubs huddled together until Farrington arrived to help them out.

“I certainly wasn’t expecting that type of den,” Farrington said. “They told me [it was] a hole in the ground, and I was thinking of a typical bear den, with two cubs in it.”

[Act Out With Aislinn: The time I held a black bear]

Instead, there were three cubs that weighed about three pounds apiece, according to Randy Cross, a biologist for the Maine Department of Inland Fisheries and Wildlife. Cross leads the state’s bear den crew, and he and his crew also headed toward Woodville to pitch in. The bears were likely just a few weeks old, he said.

Farrington found three cubs in the ground nest, and two of them weren’t moving. Without their mother present to provide warmth, they were in danger of succumbing to the elements, Cross said.

“I called Randy to verify that he wanted us to take them,” Farrington said. “Then I took two and my girlfriend [Melissa Elkins] took one, and we put them right in our jackets and walked them out. We took them back to her place, where we put them in a large metal kennel on top of an electric blanket and just slowly warmed them up that way, and holding them close for body heat.”

Cross said the cubs wouldn’t have survived for long on the frigid day, when temperatures hovered in the single digits.

“They had some damage by frostbite, but I think the warden got to them just in time,” Cross said. “I think the two coldest cubs would have frozen enough of their extremities to cause permanent damage if they’d been in there much longer. They had frostbite on their lips, which have no fur protection, frostbite on their noses, and on the pads of their feet. But it was minor.”

Cross said bear cubs are extremely resilient, and that he has watched cubs that had shown no vital signs recover after being put in a warm place for a short time.

And responding to incidents when bears have been disturbed by logging equipment has become old hat for the team as well. Cross said similar incidents are reported every three years or so.

The mother bear in this case would likely have returned, according to Cross, but probably would have waited until after dark before doing so. By that time, the cubs would have died.

But Cross and his crew have put radio collars on dozens of female black bears as part of the state’s ongoing research project, and knew there were a couple of dens nearby where they could set up an impromptu adoption for the cubs.

One mother bear — the crew named her “Funk” because she was captured and collared at a place called Funky Beach — received one new cub to join her others in her Edinburg den.

The other mother bear — “Beagle,” because she was discovered by a hare hunter — got the other two foisted upon her in Orneville.

Cross and his team didn’t sedate the mother bears, but walked quietly to their den sites, dropped off the cubs, and watched to make sure the two female adults were appropriately welcoming.

Cross said Beagle was in what the crew calls “cub position,” and he thought she likely had a cub or four of her own underneath her. When she lifted her head and looked at him, Cross knew the time to act had arrived.

“I was like, ‘I’m dropping this cub.’ I dropped the female cub in front of her and [Beagle] reached out with one paw, pulled it under her, and tucked it into her chin. Based on that, I’m almost certain she’s got [other] cubs under her. So I got the male cub and dropped it and she did the same thing with it.”

Cross and his crew will revisit the dens later in the winter to see how the cubs and the surrogate moms are faring.

And although it might sound odd for a mother bear to take in a complete stranger so eagerly, Cross said biologists stopped wondering whether that might be the case back in the 1980s, when a beagle puppy fell into a western Maine bear den and the mother bear refused to let her odd-looking “cub” loose.

[It’s pretty extreme’: This group heads deep into the Maine woods in search of bears]

“The owner couldn’t get it back. He’d call the little pup to come out, and the mother [bear] would keep grabbing it and bringing it back in. At one point there was a tug-of-war and he didn’t want to hurt the pup, so he had to let go,” Cross said.

Biologists sedated the mother bear in that case, and rescued the puppy, which was named “Dodger.” That episode taught the biologists a valuable lesson.

“[Mother bears] aren’t too selective when they’re in the den,” Cross said.

After the rescue and relocation project, Farrington said he was happy to have played a role in the effort..

The upper-level low pressure area that has been parked over southern New England will continue to stall there today into the overnight period then begin to open up and shift southeast into the Atlantic Thursday.
Campaign Corner END_OF_DOCUMENT_TOKEN_TO_BE_REPLACED

Dale Crafts filed his nomination papers for Feb. 21 with the Secretary of State to officially be placed on the primary ballot on June 9, 2020, for the U.S. House of Representatives 2nd District race.
Our Sponsors END_OF_DOCUMENT_TOKEN_TO_BE_REPLACED