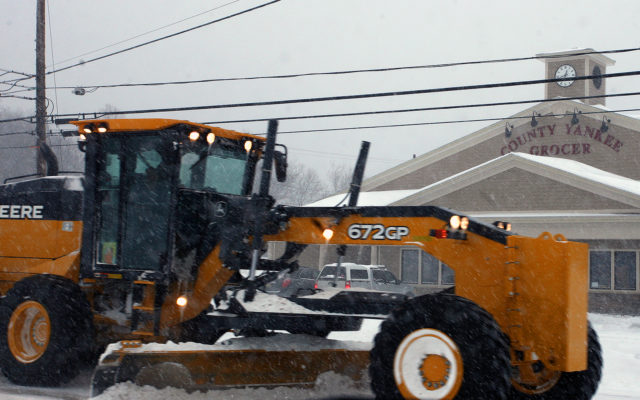 Jen Lynds, BDN Staff • February 3, 2019
Kayla McGuire of Houlton thought that this winter would be a bit better than last winter.

HOULTON, Maine — Kayla McGuire of Houlton thought that this winter would be a bit better than last winter.

As a homeowner who burns both wood and oil, she tries to keep her heating bill down by relying on wood heat the majority of the time.

Last year, she ordered six cord of wood and had two left over when winter came.

“I decided that I would just order four cord of wood to get me through this winter, and just have the oil company deliver oil when I need it,” she said Thursday. “But now I think that I might have made a mistake.”

What she didn’t anticipate, she said, was how cold October was, and that the snow would begin as early as it did.

“I have really gone through a lot more wood than I anticipated,” she said. “I am trying to maintain what I have left by relying on fuel oil a lot more, but I don’t want to go over my budget for that. I am really hoping to make it last, because I just don’t think buying more wood is feasible. I have only lived here for 12 years and don’t always know exactly how far to go when purchasing my heat supply.”

Not only did the first storm of winter occur in October, it was also accompanied by record-setting cold, according to the National Weather Service in Caribou.

On the same morning in Caribou, the low of 16 degrees broke the previous record of 17 degrees that was set in 1976. The following day, Estcourt Station observed a low of 5 degrees, making it the coldest spot in the nation. A total of 3.5 inches of snow fell in Caribou that month, the most since 2009. Some locations across southern Aroostook County received from six to 10 inches.

In Caribou, Jana York is facing the same issue. She customarily sets aside a budget for fuel oil, and she said Thursday that she has already gone through 60 percent of it.

“I don’t know if we are having a snowier-than-normal winter, but it seems to me some of the days and nights have been colder,” she said. “I am in a difficult spot because I work from home and also homeschool my children here, so we need to keep the thermostat pretty high all day. It isn’t like I can turn it down low and then go to work for eight hours.”

Forecasters noted that November 2018 averaged 3.5 to 5.5 degrees below normal in The County. It was the fourth coldest November on record at Houlton and the ninth coldest in Caribou. A significant cold spell occurred Nov. 10-23, and Thanksgiving Day was also “brutally cold.”

In December, there was a cold weather stretch during the first two weeks of the month, and also at the end of the month. Temperatures for the month registered from 1 to 3 degrees below normal.

Both McGuire and York said that they did not qualify for heating assistance, but had to ration money each summer in order to pay for heating bills in the winter.

“I know it is a common problem,” said York. “And it is hard to know how much you are going to need from winter to winter.”

The Governor’s Energy Office, which last conducted its weekly heating fuel price survey on Jan. 7, found that the current statewide price for heating fuel is $2.86 per gallon, down 9 cents in the last three weeks. The average price of kerosene also dropped 9 cents to $3.45 per gallon, while propane has dipped to $2.87 per gallon. That is just below the $2.88 or $2.89 per gallon price that has held statewide since October.

Despite the cold, others have found a way to save money this heating season. Travis Shea, another Caribou resident, invested in a heat pump two years ago.

“I have managed to save approximately $100 a month,” he said. “It was a good choice, because I have relied on fuel oil in the past.”

He said he only uses oil as a backup now.

“I wish I had made the decision earlier,” he said Thursday.

The upper-level low pressure area that has been parked over southern New England will continue to stall there today into the overnight period then begin to open up and shift southeast into the Atlantic Thursday.
Campaign Corner END_OF_DOCUMENT_TOKEN_TO_BE_REPLACED

Dale Crafts filed his nomination papers for Feb. 21 with the Secretary of State to officially be placed on the primary ballot on June 9, 2020, for the U.S. House of Representatives 2nd District race.
Our Sponsors END_OF_DOCUMENT_TOKEN_TO_BE_REPLACED