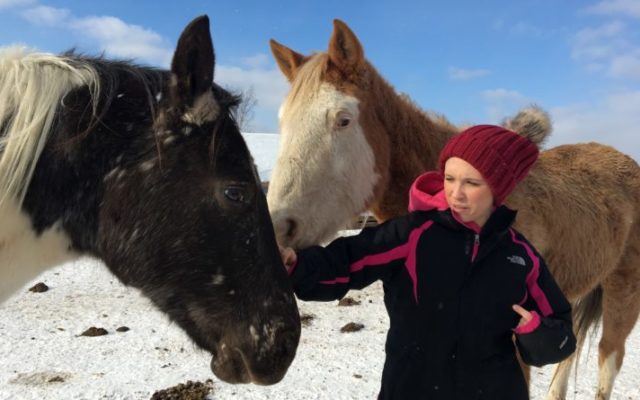 At this Maine farm, it’s hard to tell the rescues from the livestock

Julia Bayly, BDN Staff • January 26, 2019
It’s a bit tricky to differentiate which animals are the rescues and which are the livestock at Hill Top Farms in Frenchville.

It’s a bit tricky to differentiate which animals are the rescues and which are the livestock at Hill Top Farms in Frenchville.

Sure, there are the typical for-food animals one expects to see on a small diversified family farm in northern Maine.

Then there are the misfits, as Melissa Jandreau calls them. A collection of critters that, for one reason or another, no one else wanted.

“Every animal deserves a good home,” Jandreau said. “Even if it will eventually be slaughtered for food, they deserve to have a happy life while they are alive.”

Jandreau owns and operates Hill Top Farms with her longtime partner Adam Dube, who is a truck driver by day and runs a slaughter house on a part-time basis.

“I like knowing where our food comes from,” Jandreau said. “Our boys are learning early on what farming and food is all about.”

The two boys, Emmett, 4, and Oliver, 2, also are learning about compassion when it comes to raising animals, thanks to their parents’ rescue work.

There are retired show horses Jake and Sandy who arrived after their previous owner was too overwhelmed to care for them. 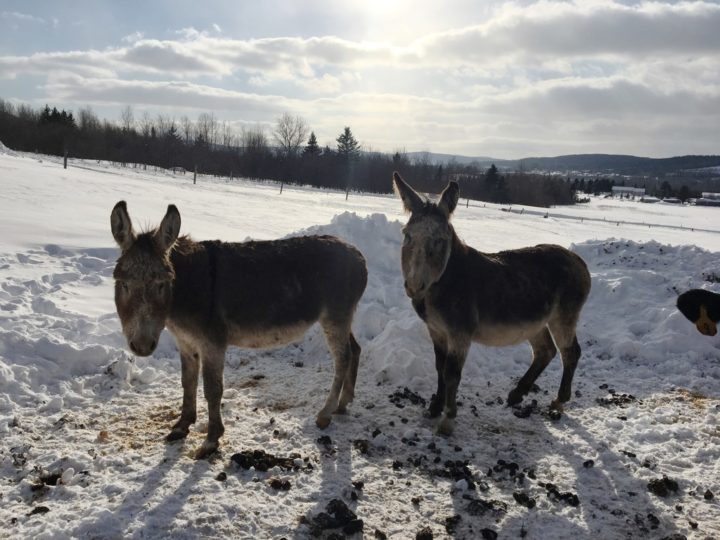 There’s also Goldie, a 20-year-old Tennessee Walker horse that Jandreau discovered when she was in such poor health and underweight that veterinarians have said she will never fully recover.

Happy to hang out with the three horses but very shy around people are the two rescue donkeys, Norman and Alice.

Never far from their sides are Moo Cow, Swiss Cheese and Big Mama — a highland cross, a Brown Swiss bull and a Hereford-Angus cross, respectively.

Inside the small barn, potbellied pig Gordie hangs out with Wilma the dairy cow, who is recovering from a foot injury.

The Idaho Pasture Pigs are allowed to free range within the fenced-in areas of the farm while the newer, prized pork-producing Mangalitsa pigs are spending the winter in a cozy stall in the barn.

“It does seem every time we go to pick up an animal for the farm, we end up coming back with a rescue,” Jandreau said with a laugh. “We can’t seem to help it.”

Every animal has a story

Jandreau said they were not looking for horses when they learned about Jake and Sandy, but once they heard their story there was no way they weren’t getting them.

“They belonged to a woman who had just lost her husband,” Jandreau said. “She was really scared of the horses and wanted nothing to do with them.”

So the two horses, plus all their tack, came to Frenchville, where 7-year-old Sandy immediately took over.

“She’s kind of the barnyard bully,” Jandreau said with a laugh as the brown and white horse used her nose to push Jandreau from behind. “She is a real attention hog and has to be in on everything.”

Sandy, it turns out, also has a kind of a tell, according to Jandreau.

“She has a crooked nose to begin with,” she said. “When she’s up to no good, it gets more crooked.”

Jake, who is 16, is quite friendly but seemed content to let Sandy monopolize the spotlight.

Goldie, Jandreau said, was another acquisition made when looking for other farm animals.

“She had the saddest face you have ever seen when we first saw her,” Jandreau said. “The person who owned her said to us, ‘Do you want her? We don’t have time to bother with her.’” 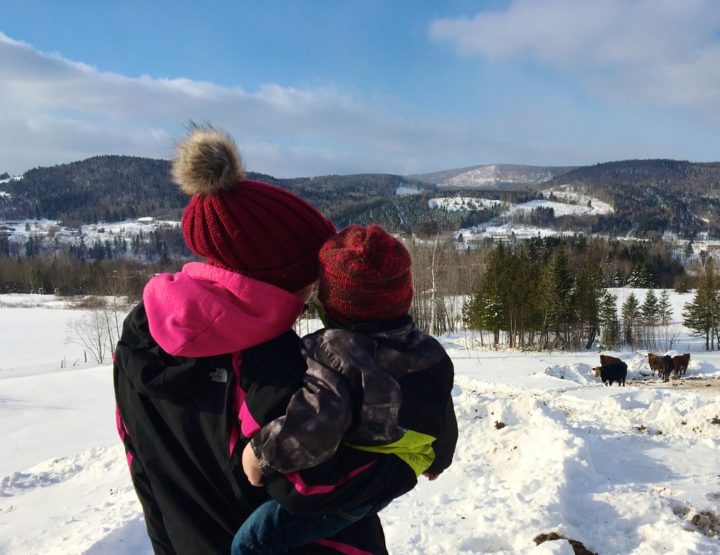 That’s all Jandreau and Dube needed to hear and they spent the next year dealing with Goldie’s multiple infections and severe infestations of parasites.

“She should be around 1,300 pounds, but she’s about 600 pounds underweight,” Jandreau said as the older horse slowly walked up to nuzzle her shoulder. “She was so sick for so long. The vet told us she’s never gaining all the weight back.”

Jandreau and Dube were on their way to pick up a cow in southern Maine a year ago when they found Norma and Grace, Jandreau said.

“We had a trailer to pick up one dairy cow. Adam said we can’t have this trailer and just come back with one animal,” she said. “So we looked around and found these two donkeys that needed a new home.”

It was on a trip to pick up some pigs that Moo Cow joined the farm.

“Adam was loading the pigs and saw this calf standing on some pallets and looking like it was about to die,” Jandreau said. “The calf was just a little peanut, and Adam bought him right away for $100.”

Jandreau ended up bottle feeding the malnourished animal and now, a year later, Moo Cow is healthy and a permanent member of the family.

“He’s doing so good and is really a pet,” Jandreau said. “He lets the kids sit on his back and is just as mellow as can be.”

Looking to the future

Hill Top Farms covers 300 acres and Jandreau hopes to see it grow from the current 40 beef and dairy cows and half-dozen pigs.

“This spring we plan to build a milking parlor to milk the dairy cows,” she said. “And I’d like to see us get up to 100 head of beef cattle.”

She’s under no illusion how much work that plus raising two boys will be.

Dube, she said, is a fourth-generation farmer who grew up raising animals for food.

Jandreau’s maternal grandparents farmed but she said her mother wanted nothing to do with that life.

“She really kind of hates farming,” Jandreau said with a laugh. “So I guess it skipped a generation because I love it.”

When Dube is on the road trucking, Jandreau travels the mile or so from their house to the barn and pastures where the animals are housed to feed, water and check in on them.

“We plan to build our home up here eventually,” she said, holding Oliver in her arms and looking out over her land. “I love being up here working with the animals with my boys. It’s how we want them to grow up.”

This year for Christmas Emmett and Oliver each got their own cow and Emmett is already talking about plans to breed it and sell the offspring, Jandreau said.

And while Oliver enjoys petting his own new cow, Jandreau pointed out his limited vocabulary makes it a bit difficult to know his plans.

“‘Tractor, cow, daddy,’ in no particular order are his main words,” she said. “He’s going to definitely be a farmer.”

To be a farmer, she said, means dealing with everything that comes along, whether it’s slaughtering an animal you have raised from a baby or nursing a sick critter.

“Last year was the first year we had a cow give birth to twins,” she said. “We were really excited until one [calf] started not doing well.”

The couple started giving the calf medications to help it and ended up moving it into their kitchen so they could watch it and bottle feed it.

When the calf started to improve, Jandreau said they moved it out to their sun porch where it stayed for a week until it was well enough to move back to the barn.

“She did really well for two weeks, and then one day when I went to check on her she was down again,” Jandreau said. “I right off started giving her CPR, but she did not make it. I really cried.”

But that’s just part of farming, she said.

“You can’t give up when things like that happen,” Jandreau said. “There are times you cry yourself to sleep when an animal dies [and] the farming life is not for the faint of heart.”

But it’s the life she and Dube have chosen.

“We often joke we are two old farming souls in a modern world,” she said. “It’s a struggle every day [and] can take a toll on every part of your life [but] if you keep pushing, it is all worth it.”

As the Maine Turnpike expects 1 million travelers alone over the Labor Day weekend, policymakers are gearing up for a sprint to solve one of the state’s most intractable problems: a long-standing — and growing — transportation funding gap.
Apex Weather END_OF_DOCUMENT_TOKEN_TO_BE_REPLACED

The Valley will receive an inch or less of accumulation from Thursday's system based on current forecast model data.
Our Sponsors END_OF_DOCUMENT_TOKEN_TO_BE_REPLACED