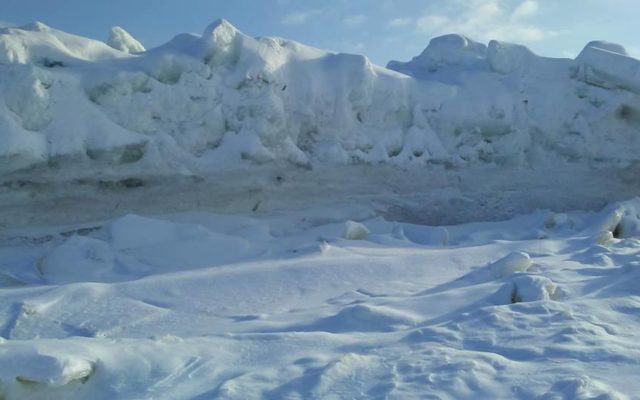 Jessica Potila, SJVT / FhF Staff Writer • January 24, 2019
Giant ice formations on the St. John River in St. Francis have some residents concerned about what will happen when the spring thaw arrives.

ST. FRANCIS, Maine — Giant ice formations on the St. John River in St. Francis have some residents concerned about what will happen when the spring thaw arrives. 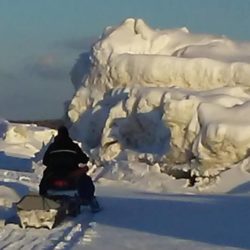 St. Francis resident Keith Jandreau drives a snowmobile near some giant ice formations on the St. John River in town in mid-January.
(Courtesy of Judy Jandreau)

“He’s 6-feet,’2-inches so that gives you an idea of how high these are,” Judy Jandreau said.

Carla Albert, who along with her husband Allan, are good friends with the Jandreaus, live along the river near the ice formations.

“That’s some very strange stuff out here let me tell you,” Carla Albert said.  “We’ve been here 30 years this year and we’ve never, ever seen the ice do this.”

“My husband and Judy’s husband go out and make a trail across the river and this is just not nice stuff. It’s very, very thick and jagged,” Carla Albert added.

Some locals are concerned that flooding may occur if the giant chunks of ice fail to run with the river during the annual spring ice out. The river made a premature although temporary run for it in December when a streak of unusually warm weather hit the St. John Valley.

“When it ran, the flats were all covered in ice. That was our relief valve when it would run in the spring,” Albert said. “Now we don’t have much of a relief valve this year and there are great big icebergs out there.” 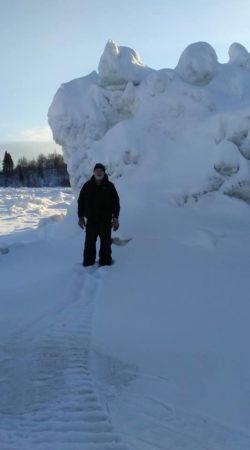 Keith Jandreau of St. Francis, who is 6 feet, 2-inches tall, stands before an ice formation on the St. John River. The weather is creating unusually large ice formations on the river this January, making some longtime residents nervous about the spring ice out.
(Courtesy of Judy Jandreau)

Judy Jandreau said that Albert is not the only St. Francis resident concerned about what the giant ice formations may mean for the spring ice out.

“A lot of people are nervous for springtime,” she said. “I’ve been up here for 42 years and I’ve never seen it like that and others who have lived along the river have said the same. It’s nerve-wracking. We know that something is gonna happen this spring.”

Depending on what happens with the weather over the coming months, the St. Francis residents concerns may not be unfounded, according to John Gibson Deputy Director of Aroostook County Emergency Management.

“As for spring, it’s a bit early to tell depending on what the rest of the winter does and how the spring thaw treats us. If it’s a gradual warming trend with slow melt that’s the best we could ask for,” Gibson said. “If it stays cold into April and warms rapidly creating faster than normal melt rates, that starts to concern us. If you add rain to that scenario it could become a real problem.”

In any case, the longtime St. Francis residents are not relying on Mother Nature to have their best interests in mind.

“We’re making preparations,” Albert said. “All we can do is have flood insurance, hope for the best and be prepared to run.”

Three candidates are vying for two seats on the Fort Kent Town Council. Voters will decide which of the three -- Corey Pelletier, Brandon Dayton or Andrew Caron -- will get a seat during the town’s annual election on Monday, March 22.
Apex Weather END_OF_DOCUMENT_TOKEN_TO_BE_REPLACED

A warm front lifting across the region this morning will lead to increasing clouds with snow overspreading the area later this morning. A cold front will move through this afternoon with snow likely for a period before tapering off behind the front this evening with overnight lows occurring relatively early around midnight.
Our Sponsors END_OF_DOCUMENT_TOKEN_TO_BE_REPLACED