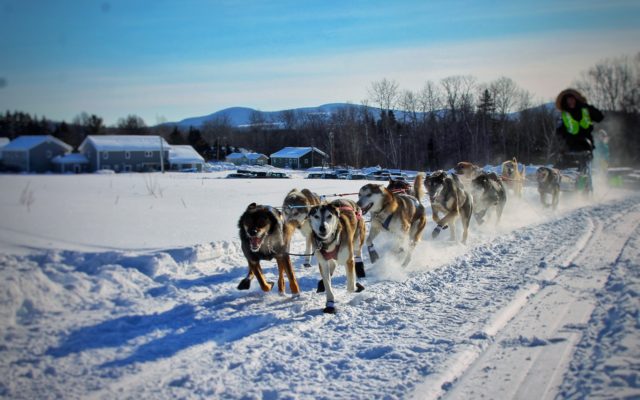 EAGLE LAKE, Maine — Hours before a big winter storm rolled into Aroostook County, 10 mushers geared up for the Irving Woodlands Eagle Lake 100 sled dog race that kicked off at 10 a.m. Saturday morning. By 5:10 a.m. Sunday, when the snow was starting to fall heavily, the last of the teams crossed the finish line, with Martin Massicotte of St-Tite, Quebec, capturing the victory. 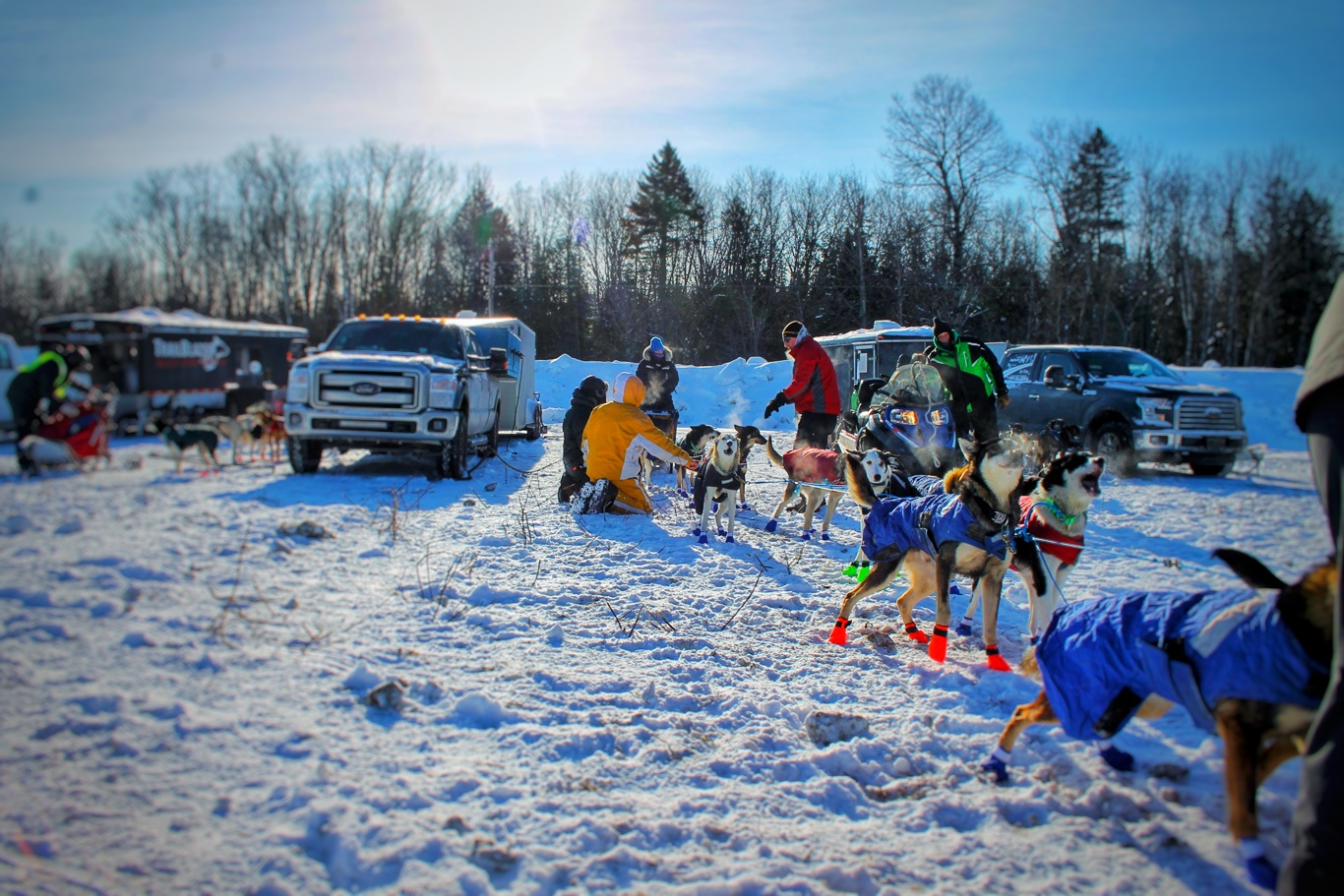 While one musher gears up at the start of Saturday’s Irving Woodlands Eagle Lake 100, the dogs get excited and start to howl in anticipation. (Morgan Mitchell | SJVT/FhF)

The 100-mile route had mushers and their dogs racing up to Moose Point camps where they turned around before heading back. More than 100 Alaskan huskies, Siberian huskies, and a few other breeds manned the 10 competing squads.

The four-legged racers howled in waves as owners checked on each before hooking them up to the sleds Saturday morning. Each team could start with up to 12 dogs, but all competitors needed to return with a minimum of eight dogs still racing.

“If someone’s dog gets injured or something, they can drop their dog off at the dog drop box at the checkpoint and we bring the dogs back down for the [mushers],” Holly Dionne, one of the organizers of the race, said Saturday.

After the race, she said no dogs suffered any injuries, but mushers dropped off three dogs at the checkpoint that later were returned to their owners at the base camp. Dionne said the dogs that were dropped were “younger dogs who just were not ready to run another 50 miles due to it being their first 100 mile race.”

The temperatures of at least 14 degrees below zero Fahrenheit likely kept spectators away, but Dionne said the dogs couldn’t have been happier.

“We’re expecting a really fast race, because the dogs love the cold,” she said before the race.

All of the mushers finished the race without incident or injury. Massicotte, who won his fifth straight and ninth overall Irving Woodlands Can-Am Crown 250 when he crossed the finish line in Fort Kent last year, won the Eagle Lake 100 in 9 hours and 35 minutes. Andre Longchamps, another musher from the province of Quebec who often finishes in the top five at the Can-Am, finished the Eagle Race just 12 minutes behind Massicotte. Longchamps’ teenaged son Tristan came in third with a time of 10 hours 32 minutes. The final racer, Giles Harnois finished in 14 hours, 52 minutes.

Dionne said the safety of the dogs was the competitors’ top priority and that “the mushers know their dogs well enough that they know when to rest them and feed them on the trail.” She also said that with the great trails and a veterinarian team, dog injuries are “not very common.”

While there were no injured dogs, at one point, an entire team got loose. According to Dionne, one musher lost his team for nearly 10 minutes before they were found by the snowmobile safety team.

“He was stopping to snack them and the snow hook didn’t latch in the snow properly so they ended up taking off,” Dionne said.

Once they were located, the musher gathered up his team and went on to finish the race.

Another dog also got loose at about 5:30 a.m., well before the start of the race on Saturday. Organizers of the Maine Lost Dog Recovery Facebook page posted an alert about the 3-year-old gray and white husky named Kaisha on Sunday.

According to the post, Kaisha was “spotted around town in Eagle Lake and at the finish and start lines of the race Saturday and apparently spotted on snowmobile trails Sunday.”

Kaisha was to race on the team of musher Gilles Harnois. Harnois decided to race in the hope Kaisha would pick up the scent and try to go to the team. The owners have asked that anyone who spots the dog not chase Kaisha, but rather get down low and call her over, then call 819-996-4924. Even if the dog does not come over, folks are urged to call and report any sightings.

Heavy snow is expected to overspread the Valley this afternoon and continue into the evening hours.
Crown Politics END_OF_DOCUMENT_TOKEN_TO_BE_REPLACED

Maine’s longest serving legislator, Martin was first elected to the Maine House of Representatives in 1964 when he was 23.
Our Sponsors END_OF_DOCUMENT_TOKEN_TO_BE_REPLACED