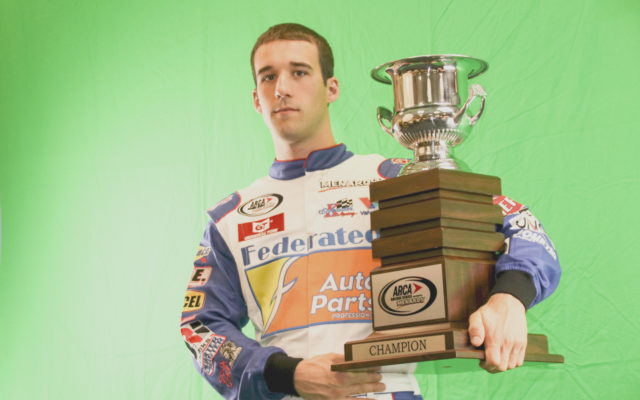 The Fort Kent native, who has raced at a variety of levels and won the ARCA Series championship two years ago, said he is pursuing deals to drive race cars, including opportunities in NASCAR’s Camping World Truck Series.

Theriault was a coach last season for 18-year-old MDM Motorsports team driver Chase Purdy in the ARCA Series. He said he would like to continue mentoring young drivers.

The 24-year-old Theriault said he has a variety of other projects in the works for the 2019 season.

Theriault is based in Mooresville, North Carolina, but he will make several trips to the Northeast where Crazy Horse cars will be racing.

“One of my goals has always been to continue to have an impact in the Northeast racing community besides driving,” Theriault said. “I feel I have a pretty good ability to make a positive impact on people.”

Theriault, who also has been a crew chief, is confident that he can multitask well and be involved in several different aspects of racing.

Theriault has had a long history with Mitch, Judy and Mickey Green, the family that owns Crazy Horse Racing. He drove Crazy Horse Racing cars on the American Canadian Tour from 2009 to 2012 and earned a victory, 15 top-five finishes and 23 top-10 placements in 32 races.

Theriault said he will be involved in all aspects of the operation, including having input about the building and servicing of the race cars and assisting the drivers and the race teams. He will also work closely with the Greens.

“I want to be known as a pretty diverse person,” Theriault said. “I have been able to experience a lot of different things in my career.

“We want to build off the foundation [of Crazy Horse Racing]. We want to continue to improve the race cars to make them even more competitive and more recognizable.”

Mitch Green, who is Judy’s husband and Mickey’s father, is elated to have Theriault on board.

“I like the intensity Austin brings and his skills. We want to take advantage of his assets. I learned early on that Austin doesn’t take any shortcuts and to be successful in business, you can’t take shortcuts,” Green said.

Green, who has owned Crazy Horse Racing since 2008, said they would like to help make racing more affordable and provide educational opportunities at their shop.

Theriault returned to the Camping World Truck Series last year for the first time since 2016, and he finished eighth in the World of Westgate at Las Vegas Motor Speedway for startup team On Point Motorsports.

He supplied them with their first top-10 finish.

In his career, Theriault has five top-10 finishes in 12 races in the truck series.

In 2017, when he won the ARCA Series points championship for Ken Schrader Racing, he posted seven wins, 16 top-five and 19 top-10 finishes in 20 races.

As the Maine Turnpike expects 1 million travelers alone over the Labor Day weekend, policymakers are gearing up for a sprint to solve one of the state’s most intractable problems: a long-standing — and growing — transportation funding gap.
Apex Weather END_OF_DOCUMENT_TOKEN_TO_BE_REPLACED

Mostly cloudy skies will develop after midnight as a warm front moves across the area with some snow flurries possible overnight.
Our Sponsors END_OF_DOCUMENT_TOKEN_TO_BE_REPLACED