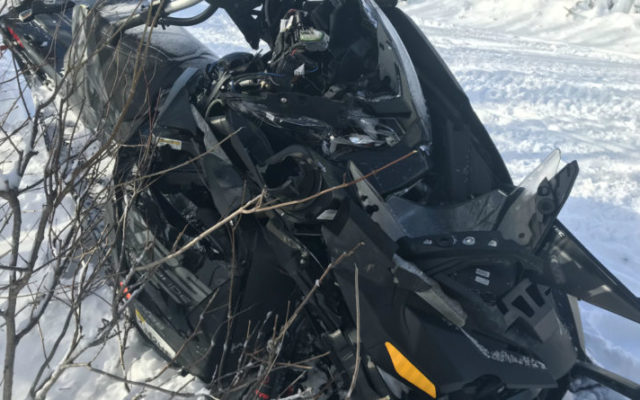 Rash of snowmobile crashes prompts call for riders to slow down, use caution

John Holyoke, BDN Staff • January 16, 2019
Maine game wardens were busy responding to a number of serious snowmobile accidents last weekend, and with substantial snow in the forecast for the coming days, wardens say focusing on snowmobile safety makes a lot of sense as more sledders will be hitting the trails.

Maine game wardens were busy responding to a number of serious snowmobile accidents last weekend, and with substantial snow in the forecast for the coming days, wardens say focusing on snowmobile safety makes a lot of sense as more sledders will be hitting the trails.

— Also on Friday, a Rhode Island man sledding near Rangeley failed to stay on the trail on a curve and struck a rock. The man suffered serious injuries to his hip and pelvis. Rider inexperience was cited as a contributing factor.

— On Saturday, three snowmobilers came across a calf moose on the trail in Bowdoin College Grant. The first rider avoided the moose, the second hit the moose, killing it and causing damage to his sled, and the third rider crashed into the back of the second sled, breaking the third rider’s leg.

“If we can stress the most common contributing factor, it seems to be speed,” MacDonald said. “Getting people to slow down would be nice.”

Snowmobiling is a popular winter activity, with 80,000 sleds registered in Maine each year. Between 75 and 80 percent of those riders are Maine residents, MacDonald said.

And according to the Maine Snowmobile Association, the state boasts 14,000 miles of trails that those riders can enjoy.

MacDonald said that although there is no set posted statewide speed limit, wardens are given broad discretion to determine when snowmobilers are operating at an unsafe speed.

“There’s laws that explicitly say you have to maintain your side of the trail and not be going into oncoming traffic,” MacDonald said. “The speed factor really is based on our opinion of the circumstances.”

In northern and western parts of the state, trail conditions are far better than they are in the Bangor area, where snow has been reduced by a freeze-and-thaw cycle, and little accumulation is left on the ground.

Jim Fahey, a game warden who patrols the Bangor area, said there is little point-to-point sledding going on in his district right now.

“There’s a good, hard frozen base, but it’s in need of some snow on top, which Friday’s storm may provide,” Fahey said. “And there’s some speculation of a bigger storm maybe sometime late in the weekend.”

Some weather forecasting websites are calling for more than a foot of snow in Bangor on Sunday alone.

“Our trail system has been brushed out and is in place, but it needs more snow to provide for a good opportunity,” Fahey said.

Fahey said the Pushaw Lake Snowmobile Club, for instance, has not even begun grooming trails yet, though that may happen this weekend.

Fahey said snowmobilers should be cautious in the places that traditionally are troublesome, such as near inlets and outlets on lakes. He reported that on Pushaw Lake there’s a large pressure ridge running southeast from Moose Island toward the Pushaw Lake Campground.

He also stressed the basic safety message that MacDonald had mentioned.

“People need to operate at a speed that’s reasonable and prudent for the conditions so that they can avoid hazards that may crop up, whether it be a pressure ridge or a fallen tree across the trail or, as was the case up north, wildlife in the trail,” Fahey said.

In addition, when traveling in a group, extra care is needed.

“People need to be mindful to not override their headlights and leave braking distances. Sometimes we see someone apply brakes suddenly, and there’s a chain reaction where people sometimes run into the person in front of them,” Fahey said. “People have to remember, if they’re getting poor visibility due to snow dust [from the sled in front of them], that’s usually a red flag that you’re following too close. Give yourself ample distance between the riders in the group. It allows for more reaction time if somebody has to apply the brakes suddenly.”

A warm front will approach the Valley today and cross the region this evening.
Campaign Corner END_OF_DOCUMENT_TOKEN_TO_BE_REPLACED

Dale Crafts filed his nomination papers for Feb. 21 with the Secretary of State to officially be placed on the primary ballot on June 9, 2020, for the U.S. House of Representatives 2nd District race.
Our Sponsors END_OF_DOCUMENT_TOKEN_TO_BE_REPLACED