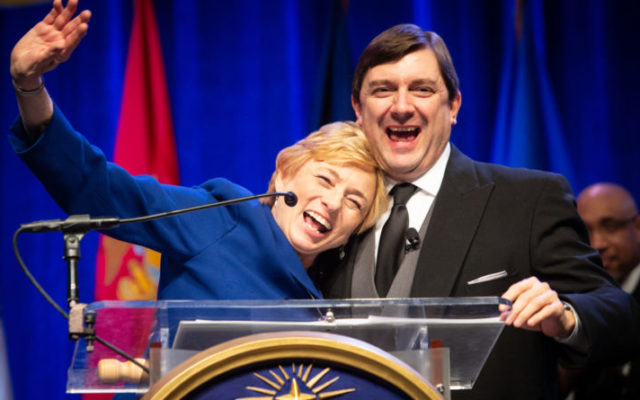 The new governor’s budget proposal is due to the Legislature in February and other than broad parameters, she hasn’t given many hints as to what it will contain. Mills is primed to get much of what she wants with her fellow Democrats controlling both chambers of the Legislature.

The budget conversation will begin in earnest when Mills files her two-year spending plan, though the liberal Maine Center for Economic Policy issued its framework on Tuesday. Mills expressed opposition to income tax hikes in it, but it illustrates the challenges of increasing funding without tax hikes.

The group sees $644 million in extra money needed to fund three obligations that have gone unmet, paying for it largely with a tax hike on high earners that Mills opposes. The Maine Center for Economic Policy wants the state to spend nearly $782 million more over the next two budget years — with most of that funding 55 percent of local K-12 education costs and funding voter-approved Medicaid expansion that Mills has already begun. Another long-unmet priority for Democrats is sending 5 percent of income and sales tax revenue to cities and towns, but that money is included in state revenue projections.

They would pay for that with $518 million in tax increases and taking $213 million from the record surplus left by former Gov. Paul LePage, a Republican who pushed for cuts in taxes and the welfare rolls while booking savings in other ways, including hiring fewer state workers.

Mills said on Tuesday that she hadn’t reviewed the group’s proposal, but she “would not support that particular measure.” She also didn’t say when her budget blueprint would be released.

This would indicate that the new governor intends on keeping her no-tax-increase pledge and could move partially toward fully funding some of these items. The Maine Center for Economic Policy sees the tax increases as a way of rebalancing income tax cuts under LePage and President Donald Trump and noted that Mills’ revenue promises also hold weight.

“Not every campaign promise has ever been fulfilled, so this is going to be a long process,” said Mario Moretto, a spokesman for the group. “But there’s a lot more at play here than whether somebody’s position on taxes changes or not.”

Top legislative Democrats are giving Mills room to craft her proposal for now. The list of legislative bill titles for 2019 is long on Democratic proposals to raise taxes, including some to revive a voter-approved, then scrapped surtax on high earners that was intended to fund education. But the reality is that major changes will likely come in the budget process.

Senate President Troy Jackson, D-Allagash, called Maine Center for Economic Policy’s budget proposal “quite aggressive and probably something that is not going to happen.” He has long held property tax relief as his top priority. Increasing revenue sharing could be part of that, but Jackson also wants to beef up more targeted relief programs.

“What we want to do is wait until Gov. Mills proposes her budget and then we’ll start actually having discussions about what that means, too,” he said.

Rep. Drew Gattine, D-Westbrook, who co-chairs the Legislature’s budget-writing committee, noted the surplus and said lawmakers are in “this advantageous position,” but he didn’t want to comment on “how the math breaks down” before Mills makes her proposal.

Republicans will have a say by the time the budget is done, since two-thirds majorities in both chambers are required to pass a budget. A party official has said Mills could trigger a “rebellion” by breaking her tax pledge. How she and Democrats balance these demands will be a key storyline of the 2019 session.

One ballot spot is filled for a March special election to fill a vacant seat in the Maine House of Representatives. Democrats in House District 124, which includes parts of Bangor and Orono, chose former legislatorJoe Perry on Tuesday. He beat Bangor City Council chair Sarah Nichols in a 50-26 caucus vote.

Republicans from the district will caucus tonight to pick their candidate. As of late last week, three people were interested in that nomination: two recent candidates for public office, LePage ally Jim LaBrecque and Daniel LaPointe, and a political newcomer, Thomas White.

Friday is the deadline for candidates to gain a spot on the ballot for the March 12 special election to fill the seat that opened when Democrat Aaron Frey, who won re-election to a fourth term in November, secured the nomination to become Maine’s attorney general.

Introductions and first meetings of committees continue at the State House. As the House of Representatives and Senate stick to a twice-a-week chamber schedule early in the session — both reconvene Thursday at 10 a.m. — expect most lawmakers to be predominantly occupied with committee meetings.

Today, committees on taxation, labor and housing, criminal justice and public safety, and state and local government will meet for the first time. Click herefor this week’s schedule.

— Maine’s efforts to reduce sexual harassment at the State House remain a work in progress. After completing training mandated by a new law, several women who work as lobbyists and legislators said it was a step in the right direction but that more must be done. “There was no attempt to think about the systems that exist that allow [harassment] to happen,” another veteran lobbyist said. “The thing I’m afraid of is that people walked away hearing that as long as they avoid quid pro quo situations, they’ll be fine.”

— The nominee to lead Maine’s correctional system vowed to be more transparent and to implement more medication-based addiction treatment. In a Tuesday interview, Randall Liberty, whom Mills nominated to be her corrections commissioner, provided few details on how he would introduce medication-assisted treatment for substance use disorders into the state prison system but added that he would keep the public informed. “I am in full support of transparency in a tax-funded facility and operation,” Liberty said. “That hasn’t always been the case, but it is now.” He also said he wants to reopen a Washington County correctional facility that LePage abruptly closed last year, relocating about 60 inmates and putting 39 people out of work.

— The state’s newest member of Congress got his first committee assignment. U.S. Rep. Jared Golden, a Democrat who represents the 2nd District, will serve on the House Armed Services Committee. In a prepared statement, Golden vowed to protect Maine residents and businesses in his committee role, and said he will “never forget that Bath-built is best-built,” referring to Bath Iron Works. Although the shipyard is not in Golden’s district, thousands of its employees live there and lobbying for a steady shipbuilding workflow remains one of the Maine delegation’s leading functions.

— As the partial federal government shutdown drags on, its impact is trickling down to Maine small businesses. Trump administration officials and various members of Congress continued to hold unproductive meetings and spar verbally without any sign of a break in the impasse. Meanwhile, Maine small business owners, who have not been hard hit so far by the shutdown, braced for the negative impacts a long shutdown could have on their ability to secure loans and other support from the shuttered Small Business Administration.

The presence of a large ice disc in the Presumpscot River in Westbrook has spurred much speculation about its origin. Troy R. Bennett offers one of the more credible takes here.

But as I watched Maine journalists flail about on social media while trying to explain it with song lyrics, another theory came to me. It’s an angelic LP created by the late Christopher Cousins, the master of the journalistic soundtrack, to toy with his former colleagues.

I can almost hear him chortling at “Ice, Ice, Baby” and “You Spin Me Round.”Here is what I believe Chris would identify as the correct soundtrack. — Robert Long

Maine’s longest serving legislator, Martin was first elected to the Maine House of Representatives in 1964 when he was 23.
Our Sponsors END_OF_DOCUMENT_TOKEN_TO_BE_REPLACED