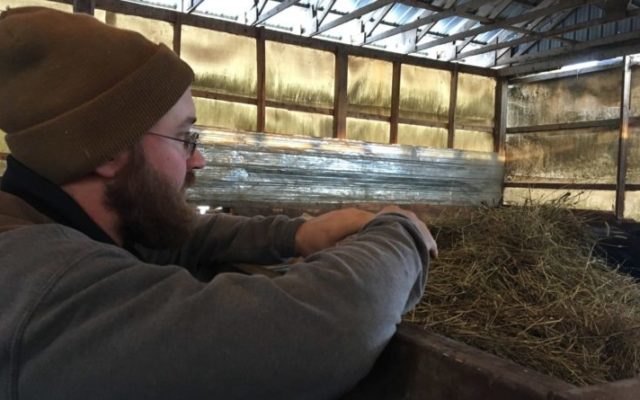 Julia Bayly, BDN Staff • January 3, 2019
When Alex Zetterman takes a moment from mending fences on the hilltop of his St. Agatha farm and looks out at his view over Long Lake, he’s a happy man.

When Alex Zetterman takes a moment from mending fences on the hilltop of his St. Agatha farm and looks out at his view over Long Lake, he’s a happy man.

Zetterman is among the new breed of young farmers that are bucking national trends here in Maine, where — counter to other states — the age of farmers is dropping.

According to census data from the U.S. Department of Agriculture, the number of farmers age 34 and younger grew by nearly 40 percent in the five years from 2007 to 2012, the most recent time the USDA did a comprehensive agriculture census. That growth surge — from 396 to 551 young farmers — far surpassed the 1.5 percent increase in the numbers of young farmers in the United States as a whole.

Ask a farmer why he or she farms, and answers will likely range from carrying on a family business to a desire to maintain a self-sufficient lifestyle.

For Zetterman, it was a combination of the two.

“I started by selling eggs when I was 5-years-old,” he said while leaning up against the rails separating his herd of 20 beef cattle from his other livestock in his barn. “My grandfather would drive me around St. Agatha. I’d sell them for 75 cents a dozen.”

By the time he was 12-years-old, Zetterman had sold enough eggs and earned enough money to purchase his own pair of beef cows and he was off and running.

When his grandfather Glenn Zetterman, a potato farmer, passed away in 2006, Alex Zetterman took over the farm and began raising livestock in place of potatoes.

Now his fiance Sabrina Daigle pitches in after her job at Aroostook Mental Health Center is done for day. His father Gary and uncle Glen Jr. also help out when not busy on their own potato farm.

Zetterman and Daigle’s son Samson just turned a year old, but already he’s showing signs of being a future farmer.

“He loves being out in the barn with chickens or riding in the tractor,” Zetterman said.

‘It works for us’

There’s also the four barn cats and Moose — a giant Great Pyrenees who guards the livestock.

In the warmer spring, summer and fall months the animals are pastured outside or free to roam in and out of the barn. Come winter, the animals room together in the barn where it can be a squawking, honking, quacking, neighing, mooing, squealing cacophony.

Zetterman just grins as he looks over his animals and raises his voice to be heard above the noise.

“It’s not exactly ‘Old MacDonald’s Farm,’” he says with a laugh. “But it works for us.”

It works because he spends up to 20 hours per week cleaning out stalls, raking up straw and moving animals around so they always have dry bedding. This is on top of feeding, watering and tending whatever medical needs they may have. Those hours double or even triple during haying and calving season.

“We do it all ourselves,” Zetterman said. “It’s a real family operation.”

Zetterman also juggles the farm chores with his own off-farm responsibilities including a part time job at Natural Resource Conservation Service office in Fort Kent and working toward his bachelor’s degree in biology and minor in environmental science at the University of Maine at Fort Kent from where he will graduate in May.

While not an organic operation, Zetterman prides himself on raising animals that are grass fed and receive minimal medications when needed and no chemical additives in feed.

“My family eats only what we grow and raise,” he said. “I won’t feed them or sell to anyone anything that is not healthy or that I would not want to eat.”

His furred and feathered charges certainly look healthy and happy — not to mention sound it — tucked away in their winter barn, their combined body heat keeping them warm.

The beef cows quitely munch hay that was harvested this past summer from Zetterman’s fields while the pigs contentedly root around in their stalls for any tasty treats left over from breakfast.

Every stall wall and lower beam seems to have a collection of chickens perching on it and the barn cats watch all the activity from atop piled bales of straw.

Only the horses are outside, free to run around in the snow in a fenced paddock before coming back in at the end of the day.

“I was not sure about housing them all under one roof,” Zetterman said. “But it really seems to be working out.”

The right choice for the right people

Farming, he said, is certainly not for everyone but Zetterman is excited about what he views as a rebirth of local agriculture in Maine.

“I love to see not only young farmers, but anyone getting into it no matter how old they are,” he said. “I think we are seeing a real increase in backyard and hobby farms.”

The most recent USDA census data would seem to back that up.

If that trend continues and more people decide to get into farming, Zetterman said the best thing they can do is talk to established farmers and draw upon their knowledge.

“Talk to a bunch of different farmers,” he said. “Eventually you are going to find one you really click with and that becomes the one or ones that really help you out.”

With that kind of relationship, he said, new farmers can avoid mistakes that can impact growing and create real financial problems.

“I certainly made my own mistakes and would love to help others not repeat them,” Zetterman said.

Among the most costly in terms of time and money?

“I once bought a piece of equipment from a farmer and did not realize it had some mechanical problems,” he said. “When it broke down soon after in the fields, it cost as much to fix what was broken as it did to buy it in the first place.”

On the flip side, he said it’s not uncommon for an established farmer to help a newcomer out by selling quality livestock at reduced rates.

“There are people who really want to help,” Zetterman said. “They know that goes into starting a farm and they want you to make it.”

Zetterman plans to keep at it and looks forward to the day when Samson is in the fields with him and his family are full time farmers.

“I hope to one day have this be the only job we have,” he said. “Being a farmer means not only feeding yourself, your family and community — it’s about being your own boss.”

As the Maine Turnpike expects 1 million travelers alone over the Labor Day weekend, policymakers are gearing up for a sprint to solve one of the state’s most intractable problems: a long-standing — and growing — transportation funding gap.
Apex Weather END_OF_DOCUMENT_TOKEN_TO_BE_REPLACED

Mostly cloudy skies will develop after midnight as a warm front moves across the area with some snow flurries possible overnight.
Our Sponsors END_OF_DOCUMENT_TOKEN_TO_BE_REPLACED