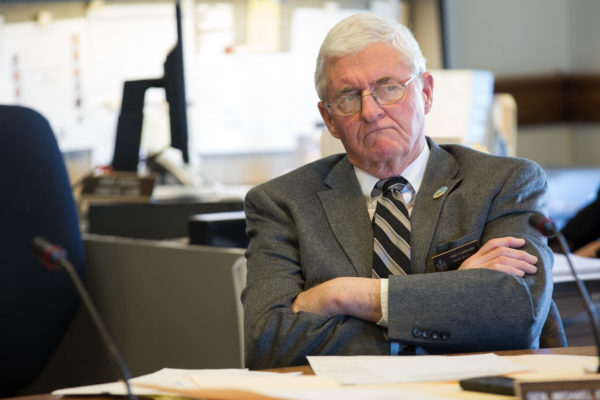 Ending the cycle of domestic violence

State Sen. Mike Carpenter, (D-Houlton) • December 28, 2018
Every Mainer deserves to feel safe in their own home -- a place where they are welcomed, supported and free from danger. Whether they are a child or an adult, no one should have to live in fear.

Every Mainer deserves to feel safe in their own home — a place where they are welcomed, supported and free from danger. Whether they are a child or an adult, no one should have to live in fear. However, for too many Mainers, this is not a reality. I believe we can do more to change that.

Earlier this month, newly elected lawmakers gathered in Augusta to take the oath of office. But now that the fanfare is over, it’s time to get to work. Serving our constituents means confronting some of the state’s biggest and ugliest challenges. We need to live up to our oath and do something to end child abuse and domestic violence.

Recent events have given me cause for serious concern. Around this time last year, we learned about the horrific case of 4-year-old Kendall Chick, who died as a result of child abuse. This news was only compounded by the tragic death of 10-year-old Marissa Kennedy, who was a victim to the same crime two months later. These crimes rattled the entire state.

But child abuse is only one component of the larger problem of domestic violence, which has gripped families across Maine time and time again. In 2014, Amy Theriault’s life was cut short when her boyfriend murdered her in her own home in St. Francis, right here in Aroostook County. Just this month, 37-year-old Niomi Mello of Richmond was slain in her home by her boyfriend.  This has to end.

Maine’s lawmakers must do more to protect families and end the cycle of domestic violence.

In the last legislative session, I worked with my colleagues in the Senate to pass measures that aimed to fix our broken child welfare system and increase accountability for those charged with protecting our children. But these bills were merely long-overdue Band-Aids. There is still much work ahead of us. It’s time to rebuild the child welfare system in Maine so it works.

My fellow senators and I also took action to strengthen domestic violence laws. We joined together to pass Senate President Troy Jackson’s bill mandating harsher penalties for murders involving domestic violence. This was a good start, but it’s not the end of the conversation.

Preventing domestic violence is a bipartisan issue. Protecting children is a bipartisan issue. As a lawyer, guardian ad litem and former attorney general, I have seen how much time and energy goes into helping at-risk kids find a safe home. While we need to make sure abusive and neglectful guardians are held accountable, we also need to give those who want to change the time and support they need to turn things around.

Over the next two years, I will work with my fellow senators to find and implement real, long-term solutions to end domestic violence — in all its forms — in Maine. I intend to work with experts in all fields to draft legislation that will help stop domestic abuse in its tracks — not just offer reactionary fixes to a flawed bureaucratic system.

The Department of Health and Human Services must have the staff and funding it needs to investigate reports of abuse or neglect and intervene swiftly, if needed. Any Mainer calling to report abuse should be able to talk to a real, compassionate human who can help them. No one should have to sit on the phone, waiting on hold, wondering how long their neighbor can afford to wait for help.

The victims of abuse cannot afford to wait while lawmakers and bureaucrats drag their feet. They need and deserve change now. It’s an honor to continue serving the people of southern Aroostook County in the Maine Senate. But that also entails a certain responsibility, one I intend to live up up to by fighting for victims of violence.

A warm front will approach the Valley today and cross the region this evening.
Campaign Corner END_OF_DOCUMENT_TOKEN_TO_BE_REPLACED

Dale Crafts filed his nomination papers for Feb. 21 with the Secretary of State to officially be placed on the primary ballot on June 9, 2020, for the U.S. House of Representatives 2nd District race.
Our Sponsors END_OF_DOCUMENT_TOKEN_TO_BE_REPLACED