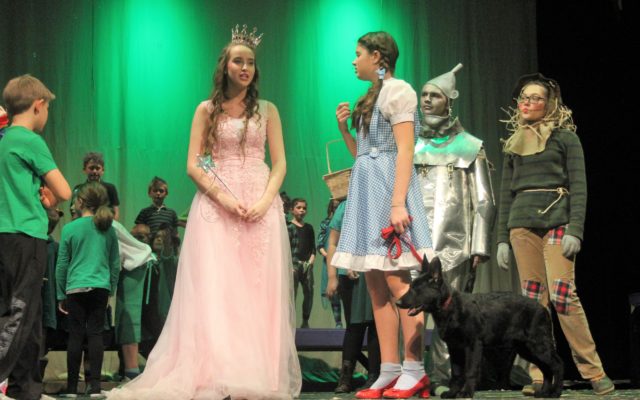 Wizard of Oz a ‘wicked’ success in Fort Kent

FORT KENT, Maine — Official numbers are not yet in, but Fort Kent Community High School educator Doug Clapp said student performances of “The Wizard of Oz” drew between 1,100 and 1,200 audience members last week, possibly making it the most attended production in the history of SAD 27 theater.

“It was possibly the biggest we’ve had,” said Clapp, who directed the show. “‘Annie’ was huge last year, but it looks like this outgrossed it a bit.”

Valley Rivers Middle School eighth-grader Sadie Pelletier, the daughter of Bob and Tina Pelletier of Fort Kent, performed in the lead role of Dorothy. A newcomer to musical theater, Pelletier initially auditioned for the role of The Scarecrow, but Clapp saw potential in the youngster and cast her as the lead.

“She had charisma,” Clapp said. “And you could just see it that this girl had that kind of like acting range of emotion that was very much what Dorothy needed.”

Pelletier said she was very surprised to get the role.

“I was thinking about not even trying out, but I decided to anyway and now I’m glad I did,” she said.

The production included more than 40 children ranging in age from elementary school to high school, and also encompassed several University of Maine at Fort Kent students. The performances took place at the UMFK Fox Auditorium.

The youngest star of the show was 4-month-old German shepherd Max Clavette, who played Toto the dog. Max belongs to Tammy, Madison and A.J. Clavette of Fort Kent. Madison Clavette, 12, had dual roles in the play as a Munchkin and beautician.

The easygoing pup appeared undaunted by the large audiences who came to see the shows, and seemed happy to follow Pelletier’s Dorothy around the stage by a red leash.

“The way she handled the dog; she handled him intelligently,” Clapp said of Pelletier. “She’s a very modest girl but she was obviously thinking, always thinking up there (on stage).”

Guiding such a large cast of children was not easy, but also was not without community support. Parents of student actors, for instance, filled in as makeup artists and costume designers.

“The parent involvement was phenomenal. This play would not have been possible without it,” said SAD 27 music educator Samantha Boutot, who also served as musical director for The Wizard of Oz.

Boutot said the students and adults involved in preparing the show spent countless hours during weeknights and weekends for more than two months working on the production, but that it was worth the effort.

“I think the singing along with the acting was amazing. We worked hard on acting during songs and getting the timing right for it all,” she said. “I think the collaboration to get them all there for rehearsals was a challenge. These kids all have busy lives and had to commit themselves to this play in order for it to be a success. Thankfully, due to their commitment, it all came together beautifully.”

Suzie Paradis, who is also town manager of Fort Kent, choreographed the show with intricate dance routines that had young children spinning, leaping and skipping across the stage like young Broadway musical stars.

“He did a great job, always helping with carpentry. The kids can’t use saws so all the sawing usually falls on me but (Martin) stepped up and he did a lot of the work too so it was double what I could do,” Clapp said.

The hard work by all those involved in the production of “The Wizard of Oz” seems to have paid off according to audience members.

Sisters Hannah Daigle, a CHS senior, and Larissa Daigle, a VRMS 8th grader, attended the show on Saturday evening. Both agreed they wanted to support their classmates.

“All of my friends were in it and they put a lot of work in it,” Larissa Daigle said. “Everybody was talking about it at school.”

Hannah, who is a varsity athlete, said she appreciates how so many students attend soccer and basketball games, and wanted to show her support for student theater.

“They support us so we support drama,” she said.

Both Daigles said they enjoyed the performance.

“My favorite part was probably when Dorothy woke up again and said, ‘There’s no place like home,’” Larissa Daigle said.

Clapp said he plans to direct another musical next year involving a similarly wide range of community actors. He said the shows “Beauty and the Beast,” “Oliver,” “The Little Mermaid” or “The Nightmare Before Christmas” currently come to mind as possibilities. 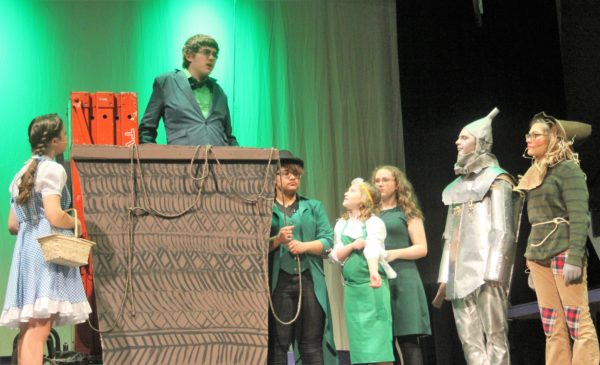 Benjamin Davis prepares to sail away in a hot air balloon while he performs as the Great and Powerful Wizard of Oz during a production of “The Wizard of Oz,” at the UMFK Fox Auditorium on Saturday, Dec. 8. (Jessica Potila | SJVT/FhF) 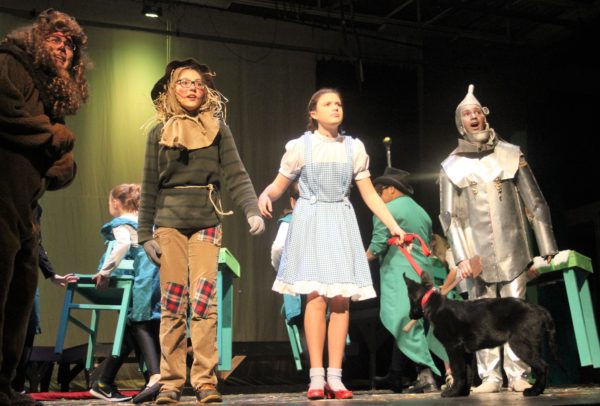 “The Wizard of Oz,” may have been the most attended theatrical performance by students of SAD 27. From left, Atillio Alvez, Ashley Daigle, Sadie Pelletier and Storm Eirman perform in the production on Saturday, Dec. 8, at the University of Maine at Fort Kent Fox Auditorium. (Jessica Potila | SJVT/FhF) 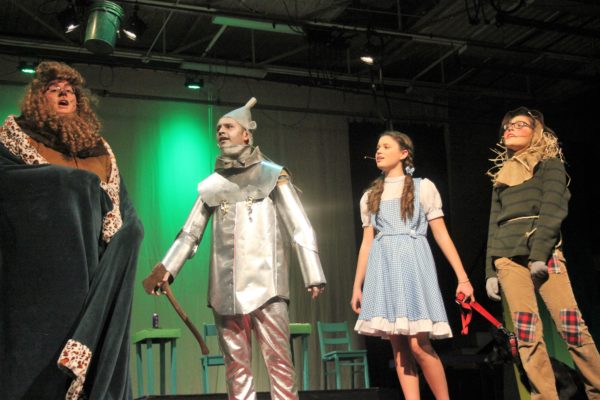 “The Wizard of Oz,” may have been the most attended theatrical performance by students of SAD 27. From left, Attilio Aviles, Storm Eirman, Sadie Pelletier, and Ashley Daigle perform in the production on Saturday, Dec. 8, at the University of Maine at Fort Kent Fox Auditorium. (Jessica Potila | SJVT/FhF) 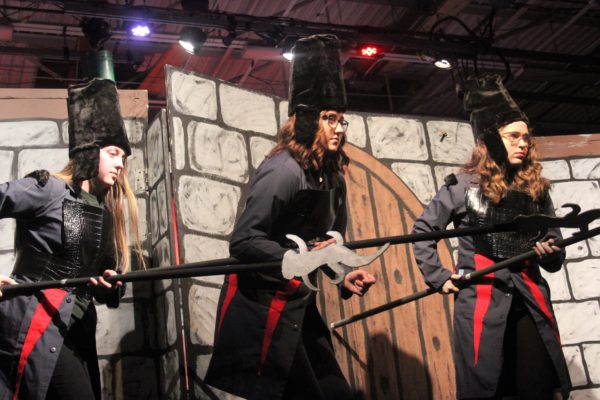 Jana Nadeau (left), Morgan Dumais (center) and Tia Saucier perform as the Winkies during a Saturday, Dec. 8, performance of “The Wizard of Oz,” at the University of Maine at Fort Kent Fox Auditorium. (Jessica Potila | SJVT/FhF) 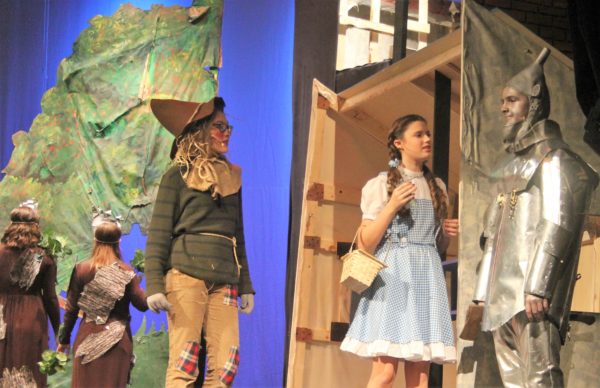 Sadie Pelletier as Dorothy (center), meets the Tin Man (Storm Eirman, right) during a performance of “The Wizard of Oz,” at the UMFK Fox Auditorium on Saturday, Dec. 8. At left is Ashley Daigle as the Scarecrow. (Jessica Potila | SJVT/FhF) 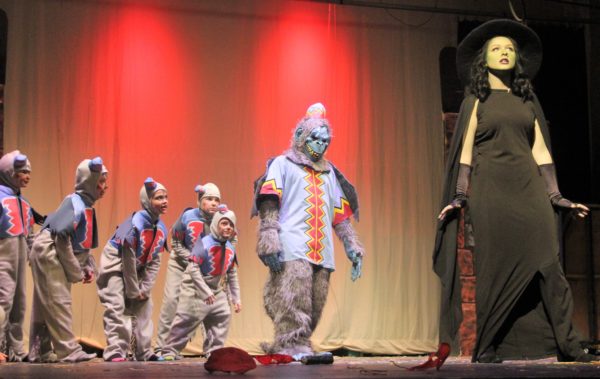 Ellie Ouellette (far right) was a formidable Wicked Witch of the West, backed up by her troop of flying monkeys during performances of “The Wizard of Oz,” at the UMFK Fox Auditorium in Fort Kent on Saturday, Dec. 8. (Jessica Potila | SJVT/FhF) 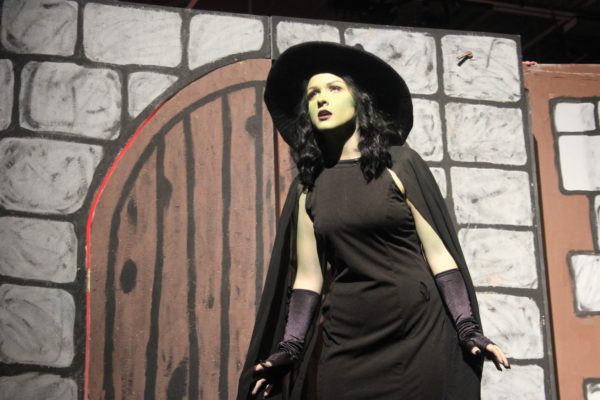 Ellie Ouellette, as The Wicked Witch, spooked audiences who attended “The Wizard of Oz,” at the UMFK Fox Auditorium in Fort Kent on Saturday, Dec. 8. (Jessica Potila | SJVT/FhF) 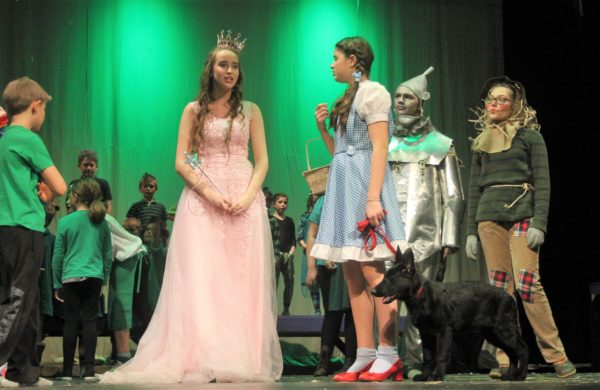 Glinda, the Good Witch (Bailey O’Brien, left) greets Dorothy (Sadie Pelletier) during a performance of “The Wizard of Oz” at the UMFK Fox Auditorium on Saturday, Dec. 8. Also featured are Max Clavette (Toto the dog) as well as Storm Eirman (the Tin Man) and Ashley Daigle as The Scarecrow. (Jessica Potila | SJVT/FhF)

Only one member of Maine’s congressional delegation had come out in favor of impeaching President Donald Trump ahead of House Speaker Nancy Pelosi’s Tuesday announcement that the Democratic-led House of Representatives would begin an impeachment inquiry.
Apex Weather END_OF_DOCUMENT_TOKEN_TO_BE_REPLACED

A strong upper-ridge anchored off the Southeastern US coast will bring warmer and more humid than normal conditions to the Valley through the late week period.
Campaign Corner END_OF_DOCUMENT_TOKEN_TO_BE_REPLACED

Dale Crafts filed his nomination papers for Feb. 21 with the Secretary of State to officially be placed on the primary ballot on June 9, 2020, for the U.S. House of Representatives 2nd District race.
Our Sponsors END_OF_DOCUMENT_TOKEN_TO_BE_REPLACED