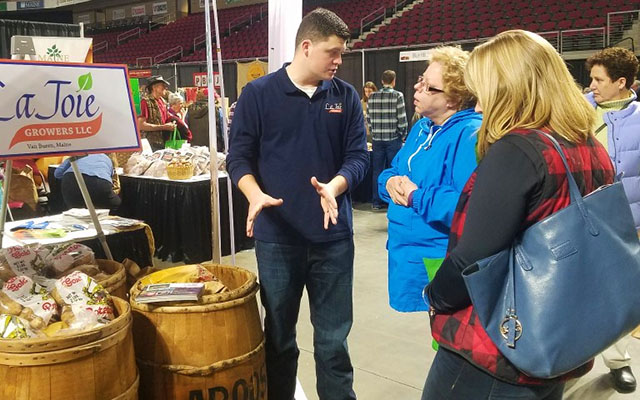 Contributed • November 17, 2018
The Maine Potato Board presented the eighth annual Maine Harvest Festival in Bangor the weekend of Nov. 17 and 18, and once again featured the popular Caribou Russet potato.

PRESQUE ISLE, Maine — The Maine Potato Board presented the eighth annual Maine Harvest Festival in Bangor the weekend of Nov. 17 and 18, and once again featured the popular Caribou Russet potato.

This marks the third year the Caribou Russet was made available at the annual festival celebrating the fall harvest from farmers and food producers. The first year the new potato variety was stocked at the festival, it sold out quickly. In the second year of availability, demand was high and hundreds walked away with their favorite potato, which was available to consumers at more stores throughout Maine.

This year, phone calls started coming in early to the Maine Potato Board, inquiring about availability of the Caribou Russet.

“In all my years working with potatoes, I’ve never seen anything like this,” said Don Flannery, MPB executive director. “This potato has it all — great natural flavor, versatility for processing, and it’s grown in Maine. It really is a potato lover’s potato.”

In the time since the release of the Caribou Russet, Maine’s russet acreage has increased by 30.6 percent, or 7,180 acres, in large part due to the demand for the product.

“One of the questions we are asked the most is how to get Maine potatoes outside of Maine,” said Flannery. “It is an item that is in high demand. Unfortunately, sometimes when you’re buying potatoes at the supermarket, you don’t know that they are Maine potatoes.

“In this case, they are branded with the name Caribou Russet,” he said. “When you buy a Caribou Russet anywhere in New England, you can be sure they were grown in Maine, with Maine farmers picking them with pride. If your local store doesn’t have Caribou Russets, ask for them by name.”

The Caribou Russet was developed by the University of Maine, and is a dual-purpose, russet-skinned variety with high yields, mid-season maturity and moderate common scab resistance. In addition to fresh-market consumption, the new variety is also useful for processing markets.

For more information on the Maine Potato Board, visit www.mainepotatoes.com.

As the Maine Turnpike expects 1 million travelers alone over the Labor Day weekend, policymakers are gearing up for a sprint to solve one of the state’s most intractable problems: a long-standing — and growing — transportation funding gap.
Apex Weather END_OF_DOCUMENT_TOKEN_TO_BE_REPLACED

Low pressure will move towards the Northeast from a low pressure over the Ohio Valley/Pennsylvania region this evening with the primary low tracking into Québec tomorrow.
Campaign Corner END_OF_DOCUMENT_TOKEN_TO_BE_REPLACED

U.S. Senator Angus King (I-Maine) today visited with students at the University of Maine at Fort Kent (UMFK) to discuss his work in Maine and Washington and answer questions from students.
Our Sponsors END_OF_DOCUMENT_TOKEN_TO_BE_REPLACED