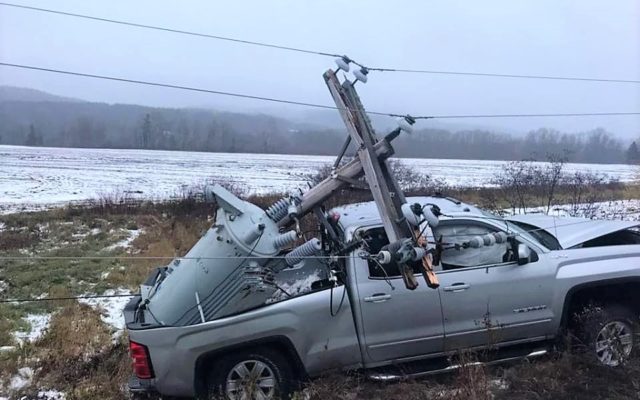 Jessica Potila, SJVT / FhF Staff Writer • October 30, 2018
A pickup truck struck a utility pole knocking out power for several hours to homes in four towns on Sunday evening, likely interrupting the plans of some to watch the final game of the World Series.

FORT KENT, Maine — A pickup truck struck a utility pole knocking out power for several hours to homes in four towns on Sunday evening, likely interrupting the plans of some to watch the final game of the World Series.

Justin Soucy, 35, of St. John Plantation was driving a 2015 GMC pickup traveling eastbound on Route 161 just west of Fort Kent in St. John at about 5:20 p.m. when he lost control of the vehicle and struck a utility pole on the opposite side of the road, according to Fort Kent Police Chief Tom Pelletier.

The pole was carrying distribution lines and a large piece of electrical equipment called a regulator, according to Emera Maine spokeswoman Judy Long.

The regulator fell into the bed of the GMC pickup, but Soucy was not injured in the accident, according to the responding officer, Sgt. Dalen Boucher. Soucy was wearing a seatbelt and the airbags deployed.

Twins Service Station towed the severely damaged pickup from the scene. The utility pole and transformer were significantly damaged, according to Pelletier.

Power was disrupted to more than 800 customers in parts of Fort Kent, as well as the towns of St. John, St. Francis and Allagash for several hours, including during Game 5 of the World Series.

Long said the last customers were brought back online by 10:15 p.m. The game ended shortly after 11 p.m. with the Boston Red Sox defeating the Los Angeles Dodgers to win the World Series.

Alcohol and speed were not factors in the accident, which was caused by driver distraction, according to Pelletier.

Three candidates are vying for two seats on the Fort Kent Town Council. Voters will decide which of the three -- Corey Pelletier, Brandon Dayton or Andrew Caron -- will get a seat during the town’s annual election on Monday, March 22.
Apex Weather END_OF_DOCUMENT_TOKEN_TO_BE_REPLACED

A warm front lifting across the region this morning will lead to increasing clouds with snow overspreading the area later this morning. A cold front will move through this afternoon with snow likely for a period before tapering off behind the front this evening with overnight lows occurring relatively early around midnight.
Our Sponsors END_OF_DOCUMENT_TOKEN_TO_BE_REPLACED