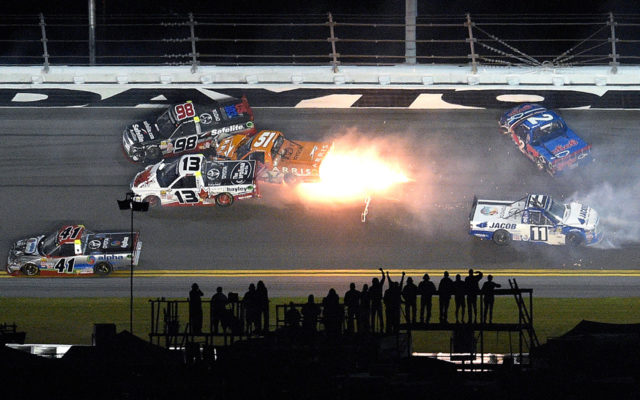 But he is hoping to create a positive memory there Friday night.

Theriault, who suffered a compression fracture in his back after crashing into a concrete wall during a Camping World Truck Series race in Las Vegas three years ago, has landed a deal to drive the On Point Motorsports No. 30 Toyota Tundra in the CWTS race. 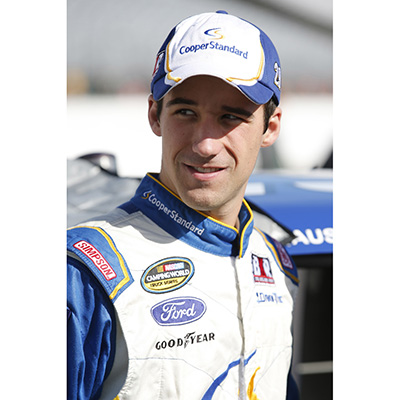 It will be just the second race for the new On Point Motorsports team, which is based in Denver, North Carolina, and was formed in July.

Theriault won the ARCA Series points title a year ago while driving for Ken Schrader Racing. He notched a series-leading seven victories and 16 top-five finishes in 20 races. He became the first driver in 65 years of ARCA to win on all of the series’ track types and disciplines in a single season.

However, he wasn’t able to land a full-time ride for this season and has raced sporadically, including a 30th place finish in the Oxford 250 at Oxford Plains Speedway last month.

Theriault has been serving as a consultant for Chase Purdy on the ARCA Series for MDM Motorsports.

In 2015, he had a 13-race truck series deal but missed four races due to the wreck at Las Vegas Motor Speedway. Brad Keselowski Racing teammate Tyler Reddick lost control of his truck and hit the rear of Theriault’s truck which pushed it into part of the wall that wasn’t protected by a Steel and Foam Energy Reduction barrier.

He finished the 2015 season with two top-five and four top-10 showings in nine races.

Theriault said he isn’t concerned about returning to a track where he suffered a serious injury.

“I’m not superstitious like that,” Theriault said Monday. “It’s a clean slate. There were unfortunate circumstances last time, but there’s no reason to believe it’s going to happen again.

“I haven’t been in a truck since 2016, and I’m looking forward to getting back behind the wheel,” said Theriault, who also has six Xfinity Series starts on his resume.

He is looking forward to being part of a new team, and hopes he can keep driving for them and be part of their organization after Friday’s race.

The team was formed by veteran Monster Energy Series crew chief Steven “Bones” Lane and several investors in July. Lane was a crew chief for Ganassi Racing and Petty Enterprises.

“There are no guarantees as of right now. It’s one race at a time. They are building an inventory of trucks, but they don’t have a back-up truck yet. I’m going in with the mindset of qualifying for the race the best I can, stay out of trouble and bring the truck home in one piece,” Theriault said.

“I would love to continue to work for them and be an integral part of their team,” Theriault said. “They feel I can bring something to the table, and I’m going to give everything I can.”

The 24-year-old Theriault said he has been working on the truck with the team for a week and feels he is capable of being more than just a driver for them because of his extensive knowledge and experience.

“I enjoy working with people who are excited about racing, and aren’t afraid to dig deep and work harder than other teams. We’re going to try to make it better and build it up,” said Theriault, whose truck will be sponsored by the Bangor-based Cross Insurance Company.

In a press release, Lane said, “We are excited to have Austin drive our No. 30 Toyota Tundra in Las Vegas. He has fit in very well with our group of guys and spent a good amount of time at the shop helping out. There has been a tremendous amount of work put forth here in the last few months in building On Point Motorsports, and we look forward to our second race.”

Only one member of Maine’s congressional delegation had come out in favor of impeaching President Donald Trump ahead of House Speaker Nancy Pelosi’s Tuesday announcement that the Democratic-led House of Representatives would begin an impeachment inquiry.
Apex Weather END_OF_DOCUMENT_TOKEN_TO_BE_REPLACED

A strong upper-ridge anchored off the Southeastern US coast will bring warmer and more humid than normal conditions to the Valley through the late week period.
Campaign Corner END_OF_DOCUMENT_TOKEN_TO_BE_REPLACED

Dale Crafts filed his nomination papers for Feb. 21 with the Secretary of State to officially be placed on the primary ballot on June 9, 2020, for the U.S. House of Representatives 2nd District race.
Our Sponsors END_OF_DOCUMENT_TOKEN_TO_BE_REPLACED