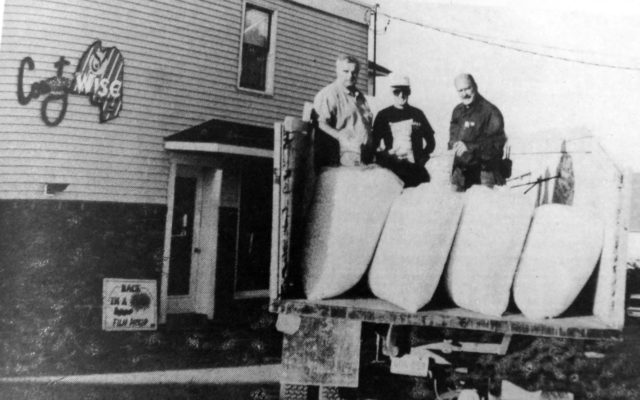 Staff, Special to the Fiddlehead Focus • August 22, 2018
An educator with 38 years in the teaching profession has taken over duties as principal of Madawaska High School.

Cough New Madawaska Principal — An educator with 38 years in the teaching profession has taken over duties as principal of Madawaska High School. Reginald Cough, a native of Bar Harbor, started his new position last week. He replaces Brother Leonard who had been principal for many years.

Thugs Who Hit Kasner’s Should Be Well Dressed — Between 75 and 100 men’s suits, as well as sweaters and sportswear, were stolen from Kasner’s store sometime between ten o’clock Saturday night and Sunday morning. The suits were in the $135 range. Loss is estimated in the vicinity of $10,000. A neighbor noticed a rear window of the store was broken, and notified police.

Canadians Stage Border Protest –– “Free Trade My Eye” reads the hand-painted sign hung on the front of Raymonde Cyr’s pickup as it leads approximately 75 protesters to the St. Leonard, N.B. Port of Entry. Cyr is leading her third protest against the collection of the New Brunswick Provincial Sales Tax on purchases made in Maine by canadian residents. The sign on side of Cyr’s truck reads, “Please remove this 11% surtax.”

St. Amant’s Celebrate 70 Years — Ernest and Emily St. Amant celebrated their 70th wedding anniversary with friends in Frenchville. They met in 1922 at a mutual friend’s house part and started dating. They were married August 29, 1923, in Keegan. They raised five children in Van Buren.

Celebrating A Century — Imelda Dubois, originally of Fort Kent and currently living in Madawaska, celebrated her 100th birthday surrounded by 78 family members. She was born Aug. 3, 1908, and spent much of her life as a stay-at-home mom to her six children. Her family has now expanded to include 15 grandchildren, 21 great-grandchildren and six great-great-grandchildren. Her husband Eddie Dubois, passed away 40 years ago.

A warm front will approach the Valley today and cross the region this evening.
Campaign Corner END_OF_DOCUMENT_TOKEN_TO_BE_REPLACED

Dale Crafts filed his nomination papers for Feb. 21 with the Secretary of State to officially be placed on the primary ballot on June 9, 2020, for the U.S. House of Representatives 2nd District race.
Our Sponsors END_OF_DOCUMENT_TOKEN_TO_BE_REPLACED