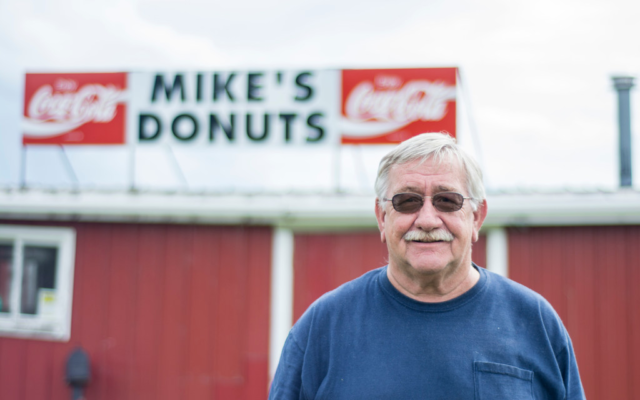 Chris Bouchard • August 22, 2018
Mike Wilcox figures he made and sold over 11.1 million doughnuts in his career through his Woodland store, Mike’s Donuts.

WOODLAND, Maine — Mike Wilcox figures he made and sold over 11.1 million doughnuts in his career through his Woodland store, Mike’s Donuts.

Neither the store nor the doughnuts are around anymore, but Wilcox remembers them with fondness.

A Woodland resident, he was born in Washburn and graduated 50 years ago in 1968, one year after marrying his wife BettyAnn.

“My daughter actually went to my graduation,” he said.

Shortly after graduating, he got into the beer business, unloading brew at stores throughout the County.

“I was pushing beer before I was able to buy it,” he said.

Wilcox hired some young kids to help him unload the beer, a task that was done by hand back at the time. He said it was rare to see any convenience stores sell food for lunch, but soon found a man named “Mr. Hemphill” who had a local doughnut shop, which he frequented to feed the crew.

“This Hemphill guy told me he got done at about 9 in the morning,” Wilcox recalled. “I said, boy, that’s the job for me.”

He and his wife then opened Mike’s Donuts in 1977.

His days at the shop did indeed end at 9, but at night instead of in the morning.

Woodland, which had been a dry town since the Depression, started offering liquor around the time Wilcox opened up shop, so he decided to start selling beer in addition to doughnuts.

“Washburn was always dry so it gave me a good job here,” he said with a laugh. “We’d sell about 150 cases a week.”

Throughout 31 years of business, Wilcox had a couple of others help him and his wife with the store, but for the last seven years, it was just Mike and BettyAnn. He said she primarily focused on making the doughnuts while he dealt with customers and made deliveries to local stores and organizations, and even to schools on special occasions.

Customers throughout The County would stop by early in the morning to grab a fresh batch of Mike’s doughnuts, and he said people would often bring friends visiting from outside the region to his store to try some of his famous doughnuts.

His shop quickly became a community gathering spot, with town meetings posted on the wall and farmers bringing their crews over for lunch break.

“The farmers would always come in crying,” he joked. “I used to say I had a drainage tile in the floor for all their tears. ‘This’ll be the year,’ they’d say, but as we went on I’d tell them 10 or 20 years later that they’re still going, and eventually they passed their farms down to their sons.”

At 60, Wilcox sold the business — and the doughnut recipe — and began working at Wal-Mart in Presque Isle. The business lasted only five years after it was sold.

“We went and helped them for 10 days and it was doing excellent,” he said. “We trained one of his cooks to make the doughnuts, but she got done, and another one was hired. It’s hard to make a doughnut. You can’t just go home and make a good doughnut.”

At one point, Wilcox said there were about 10 stores in Woodland.

The long, busy days never seemed overwhelming to Wilcox until he retired and stopped to look back. In 31 years, he said they would average 600 dozen doughnuts a week for about 50 weeks of each year, totaling about 11.1 million doughnuts, not counting the doughnuts he made for hunters’ breakfast gatherings, community events, or schools while his store was open.

Life for Wilcox is certainly less stressful, but he said he “misses the people,” and would still be working at Wal-Mart today if he hadn’t had a back operation and lost a kidney.

Even now, the doughnut shop is a landmark in Woodland, and Wilcox says he hasn’t taken the sign down.

“People will say ‘Go out to to the Carson Road and left past Mike’s Donuts’ when they’re giving directions,” Wilcox said.

As the Maine Turnpike expects 1 million travelers alone over the Labor Day weekend, policymakers are gearing up for a sprint to solve one of the state’s most intractable problems: a long-standing — and growing — transportation funding gap.
Apex Weather END_OF_DOCUMENT_TOKEN_TO_BE_REPLACED

A cold front moved through the Valley early this morning, and it will be followed by an Arctic cold front this afternoon.
Campaign Corner END_OF_DOCUMENT_TOKEN_TO_BE_REPLACED

U.S. Senator Angus King (I-Maine) today visited with students at the University of Maine at Fort Kent (UMFK) to discuss his work in Maine and Washington and answer questions from students.
Our Sponsors END_OF_DOCUMENT_TOKEN_TO_BE_REPLACED