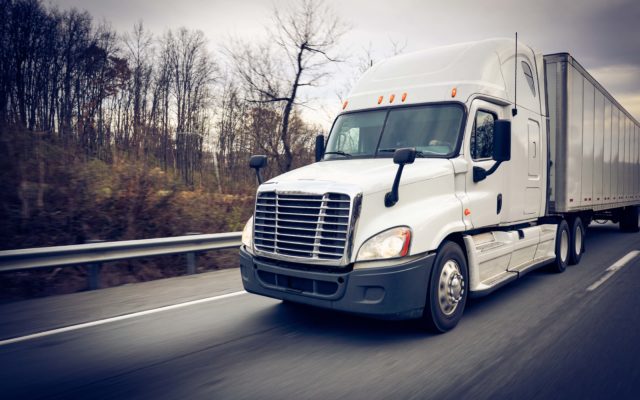 Jen Lynds, BDN Staff • June 9, 2018
Federal officials have issued new guidance for tractor trailer drivers as part of a rule governing the transportation of agricultural products across the nation.

PRESQUE ISLE, Maine — Federal officials have issued new guidance for tractor trailer drivers as part of a rule governing the transportation of agricultural products across the nation.

Kam Quarles, vice president of public policy for the National Potato Council, said Thursday that the new rules issued by the Department of Transportation’s Federal Motor Carrier Safety Administration (FMCSA) surrounding electronic logging devices and hours-of-service are “a real positive for this industry.”

An electronic logging device resembles a tablet personal computer and enables professional truck drivers and commercial motor carriers to more accurately track their hours behind the wheel and their hours at rest, so they can meet state and federal standards. The devices replace the paper log books of the past and are difficult to tamper with. A problem arose, however, because there was confusion surrounding how to count the driving hours of agricultural haulers, including those stopping and starting their rigs while going to multiple locations to get loaded.

According to the Federal Interstate Truckers Guide to Service, drivers have

There are various exemptions to the law such as the 150-air-mile agricultural exemption. As an example, this exemption allows a driver who loaded fresh produce on his truck in Presque Isle to drive approximately 150 miles to Newport before he having to start the ELD on his truck and punch in his driving time. This exemption was intended to recognize that perishable commodities can be harmed if the transportation network is not responsive during harvest and planting times.

Under the new guidance that Quarles said Thursday was accepted by the Department of Transportation, packinghouses, cold storage facilities, grain elevators and sale barns will be viewed as the starting point of an agricultural commodity. Additionally, unladen trucks that are destined for such facilities also will be able to use the 150-mile exemption. The two changes mean that a truck could potentially operate for a total of 300 miles, including 150 inbound and 150 outbound, under the agricultural exemption for the hours of service.

“This means that a cold storage facility or a packing house is the site at which the 150 air-mile exemption would begin,” Quarles said. “It no longer starts at the farm where the potatoes are grown. This is favorable to us, because drivers can operate longer.”

Don Flannery, executive director of the Maine Potato Board, said Thursday that growers were pleased with the news.

“When they first told us about these new rules, there was confusion as to what it really meant and where the 150 miles started,” he said. “They clarified it.”

At the same time, Quarles said that there are issues that the NPC requested be clarified that were not acted upon. He said that the NPC wanted the DOT to create a standard for ELDs, so that when a trucker goes to a store to buy the device, he knows it will work properly within the DOT mandates. He also said that the DOT did not consider the “unique dynamics” of loading and unloading fresh produce in regards to the hours-of-service rule.

“A trucker may pick up at a packing house and then drive to a port facility or distribution warehouse, but they can sit there in a line in a parking lot for hours waiting for produce to be inspected and then to unload,” he said. “They are not driving over the road. They are waiting for a truck bay to open up. That is hard on them. They operate really efficiently down the line and then they are chewing up hours sitting there.”

The NPC is hoping that the DOT will consider flexibility under either the ELD rule or the hours-of-service rule for truck drivers who are idling, waiting or traveling small distances and are waiting to be considered in an exempt status. They do not want that time counted into the maximum driving times.

A weak disturbance will drop down from the northwest tonight triggering some snow showers across Fort Kent and vicinity as it moves through with no significant accumulation expected.
Our Sponsors END_OF_DOCUMENT_TOKEN_TO_BE_REPLACED