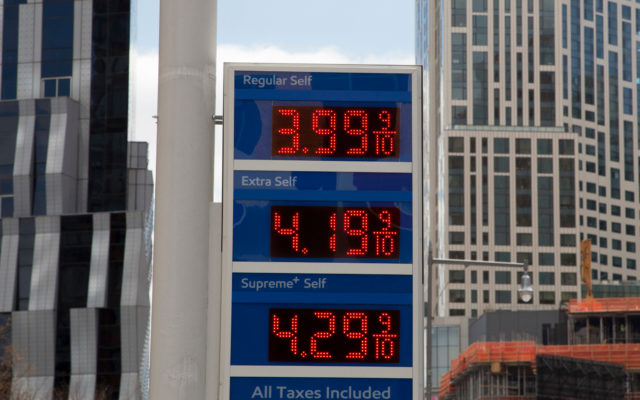 Jen Lynds, BDN Staff • May 11, 2018
For more than a year, Jason McNulty of Houlton has been saving up with his entire family for a trip to Disney World in Florida this June.

HOULTON, Maine — For more than a year, Jason McNulty of Houlton has been saving up with his entire family for a trip to Disney World in Florida this June. While he and his wife work, their three children, ages 4 through 7, have been doing small chores for their relatives to earn spending money for the trip. They had planned to drive the entire route themselves, but are now rethinking their options.

That is because gas prices have jumped an average of 21 percent nationwide in the last year, with drivers in nine state already paying $3 a gallon for regular gasoline, according to money.cnn.com.

The national average price of regular unleaded gasoline touched $2.83 a gallon on May 9, up 17 cents the past month and 49 cents the past year, reports USA Today.

Following the president’s decision to re-impose sanctions on oil-producing Iran prices at the pump could continue to rise during the summer driving season.

“When we heard [about gas prices], my wife immediately asked if we should look into flying,” he said Wednesday. “But I don’t know if we would be able to afford to do that and still see all of the things that we had planned to see while we are in Florida. The kids would like to go to several parks, and since it will be awhile before we’ll be able to get there again, we would like to make them as happy as possible.”

Kathy Lamont of Presque Isle said Wednesday that she has plans to drive to South Carolina for a family reunion this summer, something that she said she still plans to do. She said that she would have to watch the price at the pumps, however, to see just what sort of transportation she will take.

“Ordinally, I would drive my husband’s larger truck, because everyone else out there seems to have a larger vehicle,” she said. “But if gas prices are going to be high, I think that it would be better to take my little Datsun that is easy on gas.”

Both McNulty and Lamont said they hoped that the price increase was only temporary.

“I hope that it is not like a few years ago when this doesn’t creep into the winter and impact the winter heating season,” said McNulty.

Only one member of Maine’s congressional delegation had come out in favor of impeaching President Donald Trump ahead of House Speaker Nancy Pelosi’s Tuesday announcement that the Democratic-led House of Representatives would begin an impeachment inquiry.
Apex Weather END_OF_DOCUMENT_TOKEN_TO_BE_REPLACED

High pressure will bring mostly clear to partly cloudy skies to northern Maine today and tonight as low-pressure slides east of the region in the southern part of the state.
Campaign Corner END_OF_DOCUMENT_TOKEN_TO_BE_REPLACED

Dale Crafts filed his nomination papers for Feb. 21 with the Secretary of State to officially be placed on the primary ballot on June 9, 2020, for the U.S. House of Representatives 2nd District race.
Our Sponsors END_OF_DOCUMENT_TOKEN_TO_BE_REPLACED