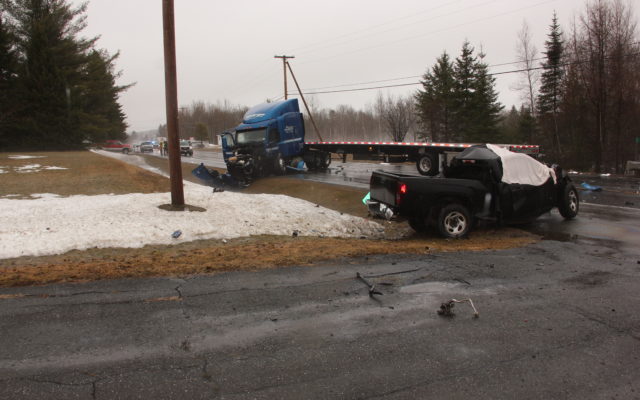 HAMLIN, Maine — A Fort Kent man died Thursday afternoon when his pick-up collided head-on with a tractor trailer in Hamlin, according to the Maine State Police.

Michael Marquis, 27, was traveling southbound on Route 1A at 2:30 p.m. when his 2009 Chevrolet Colorado crossed the centerline into the path of a northbound 2017 Peterbilt tractor-trailer, MSP Sgt. Jeffrey Clark reported in a press release.

The operator of the tractor-trailer, Kenneth Cormier, 59, of Grand Isle attempted to avoid the collision, but was unsuccessful.

Marquis, who had been wearing a seatbelt was pronounced dead at the scene.

Cormier, was not wearing a seatbelt, but did not report any injuries.

Both the pick-up and the tractor-trailer were destroyed in the crash.

Route 1A was shut down for about five hours while police investigated and the vehicles were towed from the scene.

Speed was not a factor in the crash that remains under investigation, according to the police report.