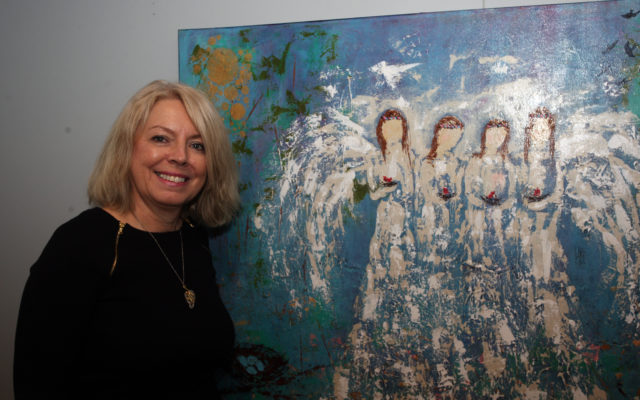 Joseph Cyr • March 30, 2018
Hodgdon native Gina Parent has worn many hats in her professional life: hairdresser, mom and business owner. But it is her latest venture into painting that has her truly excited.

HODGDON, Maine — Hodgdon native Gina Parent has worn many hats in her professional life: hairdresser, mom and business owner. But it is her latest venture into painting that has her truly excited.

Parent, 58, recently hosted her first art showing at the Wired Cafe in downtown Houlton and drew praises for her work. Roughly 40 people attended the event, and she sold a few of her paintings.

“It happened so fast,” Parent said. “It was a huge success. It got my name out there, which is hard for me to do.”

The daughter of Clayton and Marie Quint of Hodgdon, Parent has spent her entire life in southern Aroostook County. “I was a farmer’s daughter,” Parent said. “We had a big family, which was normal for farming families.”

Both of her parents are now deceased. Parent said she never really considered living anywhere other than her hometown. “I did go to school in Canada for a year, but that’s about it,” she said. “I am not much of a traveler.”

As a teen, her mother asked if she was interested in attending a painting class with her, and she decided to give it a try. Little did she know that her whole world was about to change.

“It was through Adult Education, and even though I was not an adult, they let me take the course with my mom,” she recalled. “I always loved art and had my eyes opened to the painting world through (instructor) Mary Rouse.”

It would be several more years, however, before her painting career took off, as she first focused on finishing high school.

Parent met her future husband Kevin while the two were still in high school. “He was a senior and I was a junior,” she recalled. “What I was really attracted to was his car. He had a (Plymouth) Road Runner and it was the coolest car in town.”

The two became acquainted through CB radio conversations. Her family had a base unit inside their home and additional units in their vehicles during CB radios’ heyday. “I was ‘Chicken Legs’ and he was ‘Rod Buster,’” she said. “He actually asked me out over the CB. I didn’t even know what he looked like, really, I was going out with that car.”

Parent said the Houlton area was alive in the 1970s with what are now considered classic cars. “It really was like a scene out of ‘American Graffiti,’” she said. “We would all go drag racing out on I-95, until the cops came. My father always told me not to be in the car when he was racing… but I always was. We were not drinking or smoking. We just raced around in the old cars. It was so cool.”

She spent 15 years working as a hairdresser in the Shiretown. “It was a really good business, but I just got burned out from it,” she explained. “So I decided at age 42 to go to college, through the university in Houlton.”

In 2011, Parent opened the “Antique Emporium” on Court Street in Houlton, which she operated for several years before she felt an urge to spend more time working on her true passion — painting.

“I enjoyed the business, but I was getting antsy because I didn’t have time to paint,” she said. “I was taking classes with Esther Faulkner before she passed. I just decided I couldn’t run the shop and focus on painting.”

She posted a video of her store online, and was immediately approached by Bridget Hutton Cobert, who purchased the business.

“Selling the store allowed me to dive right into painting,” she said. “I converted a room in my home into an art studio and I just started paining like crazy. It’s funny how things always seem to work out.”

Parent has also branched out into teaching art classes with students at the Carleton Project, an alternative education school located in downtown Houlton.

“Everything really just seems to progress organically with me,” Parent said. “I like to be inspired and my dream is to see Houlton full of people who want to create.”

The couple have two grown daughters — Meghan Kervin and Melinda Dickinson — both of whom live close by. They have five grandchildren and one on the way.

Only one member of Maine’s congressional delegation had come out in favor of impeaching President Donald Trump ahead of House Speaker Nancy Pelosi’s Tuesday announcement that the Democratic-led House of Representatives would begin an impeachment inquiry.
Apex Weather END_OF_DOCUMENT_TOKEN_TO_BE_REPLACED

High pressure will bring mostly clear to partly cloudy skies to northern Maine today and tonight as low-pressure slides east of the region in the southern part of the state.
Campaign Corner END_OF_DOCUMENT_TOKEN_TO_BE_REPLACED

Dale Crafts filed his nomination papers for Feb. 21 with the Secretary of State to officially be placed on the primary ballot on June 9, 2020, for the U.S. House of Representatives 2nd District race.
Our Sponsors END_OF_DOCUMENT_TOKEN_TO_BE_REPLACED