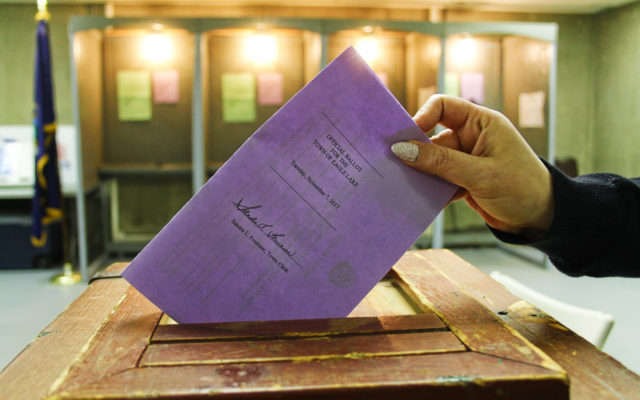 Don Eno, SJVT / FhF Staff Writer • March 5, 2018
Once again residents around the St. John Valley will gather in the coming weeks to vote in municipal elections and take part in annual town meetings.

Once again residents around the St. John Valley will gather in the coming weeks to vote in municipal elections and take part in annual town meetings.

Several communities hold elections in March or April, with the remainder taking place in June.

Frenchville voters cast ballots March 20, with polls open from 10 a.m. to 6 p.m. at the community center. The annual town meeting will start at 7 p.m., following the elections, also at the center.

Andrew Nolan and incumbent Clarence Roy are on the ballot for two open selectmen seats, each with a three-year term.

Voters elected Roy in July as part of a special election following the resignation of former board chair John Ezzy. The second selectman seat has been vacant since former board member Jamie Voisine resigned in September.

Lanna Cyr and Melissa Paradis, both incumbents, are on the ballot for seats on the Maine School Administrative District 33 school board.

New Canada residents will head to the polls on March 21. Voting will take place from 2 p.m. to 6 p.m. at the Community Center. The annual town meeting will follow at 6:30 at the same location.

Roger Desjardins is running unopposed to retain his selectman seat for another three-year term.

Allagash polls will be open 2-8 p.m., March 23, at the community center. Residents will convene at the center at 10 a.m., March 24, for the annual town meeting.

On the ballot this year are Nola Begin for first assessor, incumbent Frank McBrearity for second assessr and incumbent Clayton McBrearity. Each is for a one-year term.

Mary Beth Jackson and Barbara McBrearity are both running to retain their three-year seats on the SAD 10 school board.

Fort Kent voters will have an opportunity to cast ballots from 9 a.m. to 6:30. p.m., March 26, during the town’s annual municipal elections. Polls will be open at the Town Office.

St. Francis residents will have an opportunity to cast ballots March 26, when the polls are open, 1-7 p.m. at the community center (the former St Francis Elementary School).

The St. Francis annual town meeting will start at 10 a.m. April 7 at the community center.

Keith Jandreau is running unopposed to retain his seat on the SAD 27 school board.

Jill Jandreau is running unopposed for second assessor. Each assessor term is for one year.

Keith Jandreau is running unopposed to retain his seat on the SAD 27 board.

Wallagrass polls will be open 2:30-6:30 p.m. on March 29. At 7 p.m. residents will gather for the annual town meeting. Voting and the meeting will take place at the community center, located in the former elementary school.

Winterville normally holds its elections and town meeting in April, but details were not yet available.

As the Maine Turnpike expects 1 million travelers alone over the Labor Day weekend, policymakers are gearing up for a sprint to solve one of the state’s most intractable problems: a long-standing — and growing — transportation funding gap.
Apex Weather END_OF_DOCUMENT_TOKEN_TO_BE_REPLACED

Mostly cloudy skies will develop after midnight as a warm front moves across the area with some snow flurries possible overnight.
Our Sponsors END_OF_DOCUMENT_TOKEN_TO_BE_REPLACED