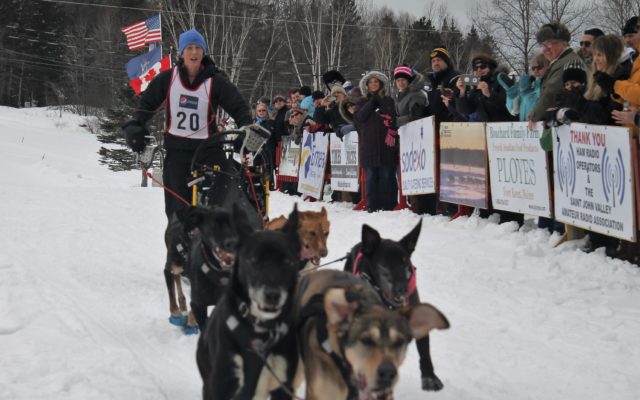 FORT KENT, Maine — The winners of the two shorter 2018 Can-Am Crown International Sled Dog Races are Rico Portalatin of Milo and Christine Richardson of New Hampshire.
Portalatin and his sled dog team raced to first place out of 18 entries Saturday in the Willard Jalbert, Jr. Can-Am Crown 100, while Richardson and her dogs topped the field of 23 in the Pepsi Bottling and Allen’s Coffee Flavored Brandy Can-Am Crown 30. 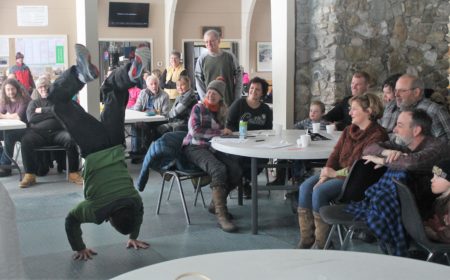 Rico Portalatin, winner of the Willard Jalbert, Jr. Can-Am Crown 100, celebrates his victory with a back handspring during an awards ceremony at the Lonesome Pine Lodge in Fort Kent on Sunday, March 4.
Jessica Potila|Fiddlehead Focus

Can-Am officials recognized all of the 100- and 30-mile mushers at an awards ceremony and brunch at Lonesome Pine Trails on Sunday morning.
Portalatin, who placed third in the Can-Am 100 in 2016, said he took last year off to give several young members of his dog team a chance to mature.
“It made me sick to my stomach,” Portalatin said of missing out on the Can-Am race last year.
He said he was determined to return to Can-Am in 2018, telling himself that even, “If I have to (race) with three dogs I don’t care. I just want to get here.”
Well he made it and finished this year’s race with a time of 8 hours, 42 minutes and 48 seconds.
Portalatin expressed his excitement over being back at Can-Am by performing a back handspring on the floor of the Lonesome Pines Lodge Sunday morning, much to the delight of the audience, which was largely composed of mushers and their families. 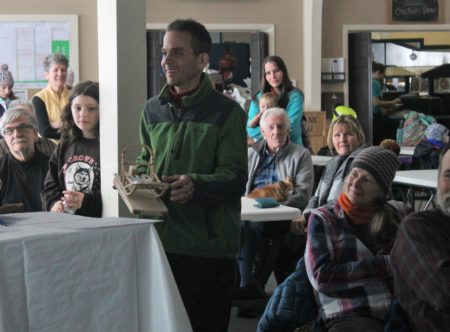 He also thanked the Can-Am community for putting on what he said is “always a great event.”
“Everybody is so friendly and nice and willing to help and they did a great job with the course,” he said.
Richardson, also expressed appreciation for the efforts of Can-Am organizers.
“The trail was gorgeous,” she said.
She credited her dog team for winning the 30-mile event, which she said amounted to her “first, first-place finish ever.”
“They’re like my family,” she said of her dogs. “Everything I asked, they gave and gave some more.”
Richardson drew laughter from the crowd when she elaborated on her relationship with her dog team.

Christine Richardson of New Hampshire, winner of the 2018 Pepsi Bottling and Allen’s Coffee Flavored Brandy Can-Am Crown 30, speaks to an audience of fellow mushers and their families at an awards banquet on Sunday, March 4, at Lonesome Pine Trails in Fort Kent.
Jessica Potila|Fiddlehead Focus

“I mean my kids are my family too but (my dogs) are like the ones who don’t argue with me,” she joked.
Richardson and her team completed the 30 miles in 2 hours, 35 minutes and 18 seconds.
Can-Am President Dennis Cyr also updated the breakfast banquet audience on the Irving Woodlands Can-Am 250.
Cyr said that three veteran Can-Am 250 mushers had checked into Camp Sylver as of Sunday morning. Defending Can-Am 250 champion Martin Massicotte, seeking his ninth win in the race, was first to check into Camp Sylver, followed by Can-Am 250 veterans Denis Tremblay and Andre Longchamps. All three men are from Quebec.
Meanwhile, with their fathers battling it out on the 250-mile trail, Etienne Massicotte and Tristan Longchamps both accepted awards for finishing in fourth and fifth place respectively in the Can-Am 100. Etienne Massicotte, 16, completed the race with a time of 9:21:26, while Tristan Longchamps, 15, finished in 9:31:05.
“My dog team finished with strength. I was really, really proud of my dogs,” Etienne Massicotte said.
Cyr also recognized musher Jeffrey McRobbie of Wayne at the awards ceremony. McRobbie returned to the Can-Am 30-mile race for the first time since he was seriously injured in 2016 when a snowmobiler struck his sled nearly head on just two miles after the start of the race. 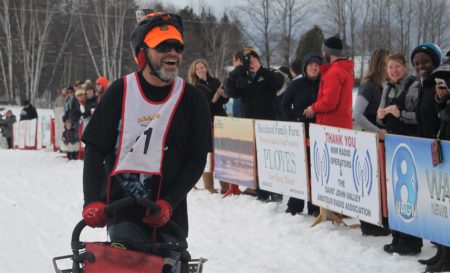 That accident left the musher with a broken arm and other injuries, but he vowed at the time to return to Fort Kent to race again. McRobbie completed the 2018 30-mile race with a time of 3:58:08.
Since the accident, Can-Am officials have increased patrols by the Maine Warden Service and volunteers with the Fort Kent Sno-Riders snowmobile club out on the trails, which Can-Am mushers share with snowmobilers.
Many of the mushers who took the microphone during the awards banquet vowed to return to Can-Am, including Can-Am 30 third-place finisher Michelle Redstone of Ontario.
“Thank you to the race organization and volunteers,” she said. “You’re keeping the sport alive.”
Cyr told the audience he was happy to hear so many positive remarks about the Can-Am races, but added that he welcomes any criticism or suggestions that could help organizers improve the event.
“We want to make our races better every year,” Cyr said.

Heavy snow is expected to overspread the Valley this afternoon and continue into the evening hours.
Crown Politics END_OF_DOCUMENT_TOKEN_TO_BE_REPLACED

Maine’s longest serving legislator, Martin was first elected to the Maine House of Representatives in 1964 when he was 23.
Our Sponsors END_OF_DOCUMENT_TOKEN_TO_BE_REPLACED