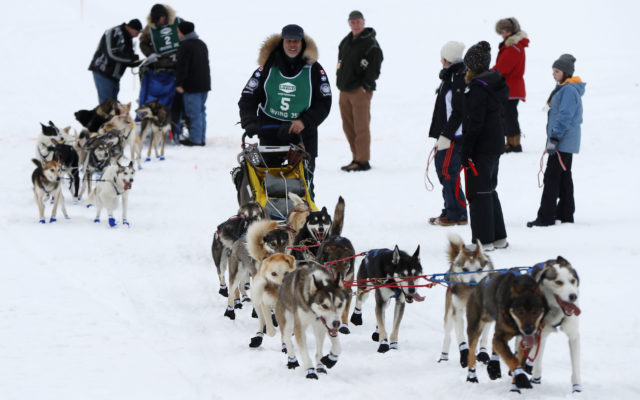 FORT KENT — All but one of the 13 mushing teams that set off Saturday morning were still on the Can-Am Crown 250-mile race course as of 3:30 p.m. Sunday.
Marla Brodsky of West Chesterfield, Massachusetts, pulled out of the race between the first checkpoint in Portage and the second one at Rocky Brook.
The defending 250 champ, Martin Massicotte, of St-Tite, Quebec, was the first musher to reach the lone safety station between Camp Syl-Ver, the second-to-last checkpoint, and the final mandatory checkpoint in Allagash, passing by just after 3:30 p.m. Sunday. Massicotte, who is favored to win his 9th grueling 250-mile race through the wilderness of northern Maine, had dropped just one dog as of Sunday afternoon, leaving him with 11.
Denis Tremblay of St. Michel des Saints, Quebec, passed the safety station just before 4:30 p.m. Sunday. Tremblay was down to 10 dogs at that point. 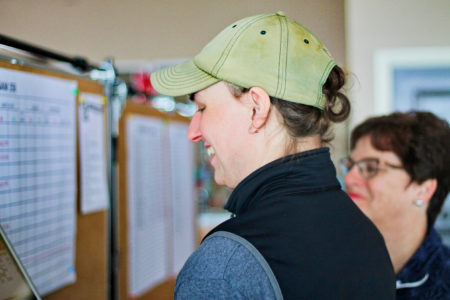 Race volunteers Scott Bosse, left, and Carol Allen, look over te leader board, Sunday at Can Am headquarters located inside the ski lodge at Lonesome Pine Trails.
Don Eno|Fiddlehead Focus

Four other mushers had left Camp Syl-Ver as of 3:30 p.m., Sunday. All of those teams had dropped at least one dog, according to race officials. Becki Tucker of Dorchester, New Hampshire,and Erin Altemus of Grand Marais, Minnesota, each dropped four dogs and remained on course with just eight animals apiece.
The distance from Syl-Ver to Allagash is 53 miles, and the final leg of the 250 event, from Allagash to the finish line at Lonesome Pine Trails in Fort Kent, is 43 miles.
St. David musher Amy Dionne, who was running one of only two teams still sporting 12 dogs, pulled into Syl-Ver shortly after 3 p.m. and, due to her accumulated rest time up to that point, could leave at any time. 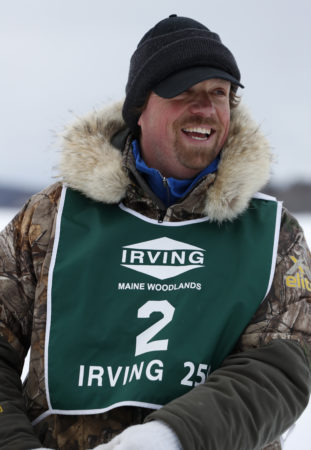 Each team is required to rest a total of 10 hours before pulling out of Camp Syl-Ver, and must also rest a minimum of four hours at the final checkpoint in Allagash. This requires mushers to balance race strategy with maximizing speed, all without tiring their dogs. It also makes predicting finishing times difficult for race officials.
“Based on the speed they are going and their performance from previous years, I don’t expect any [racers] until sometime after 6 a.m. (Monday),” said Can-Am IT support specialist Scott Bosse.
Bosse said most years, the faster teams start arriving between 1 a.m. and 2 a.m. on Monday, with the next group of mushers starting to trickle in around 6 a.m. or 7 a.m.
“Things are slower this year, due to the warm conditions,” Bosse said. Temperatures were in the high 30s during the day over the weekend and about 6 inches of fresh snow also had fallen on the region Thursday into Friday.
When the course is hard and temperatures are below freezing, times are faster, he said.
Using race data, officials predicted Massicotte, Tremblay, Altemus and Andre Longchamps would arrive between 8 p.m. and 10 p.m. Sunday in that order in Allagash.
Race organizers regularly update checkpoint and safety station times, as well as predicted finish times online at can-am-crown.net.

Only one member of Maine’s congressional delegation had come out in favor of impeaching President Donald Trump ahead of House Speaker Nancy Pelosi’s Tuesday announcement that the Democratic-led House of Representatives would begin an impeachment inquiry.
Apex Weather END_OF_DOCUMENT_TOKEN_TO_BE_REPLACED

Dale Crafts filed his nomination papers for Feb. 21 with the Secretary of State to officially be placed on the primary ballot on June 9, 2020, for the U.S. House of Representatives 2nd District race.
Our Sponsors END_OF_DOCUMENT_TOKEN_TO_BE_REPLACED