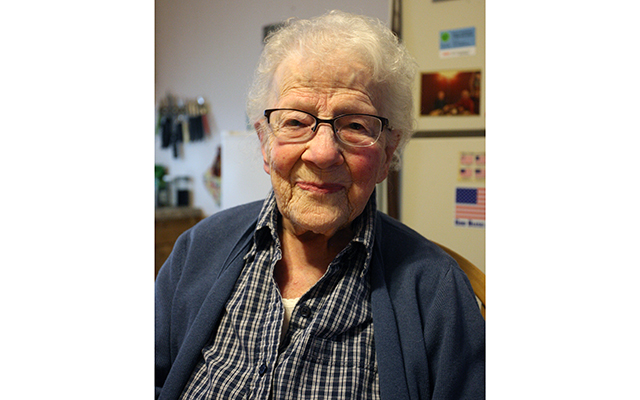 Joseph Cyr • February 7, 2018
At the tender age of 100, Houlton’s Madeline Taylor has more energy and spunk than people half her age.

HOULTON, Maine — At the tender age of 100, Houlton’s Madeline Taylor has more energy and spunk than people half her age.

So what is Taylor’s secret to a long life?

“I don’t know,” she said. “I had a grandfather who lived to be 100 and an aunt who was over 100. So I guess it runs in the family. Plus I don’t smoke. I eat very well, with a nice big breakfast every morning. I have an egg every day. It doesn’t seem to be doing me any harm.”

Taylor was born Jan. 6, 1918, in Mars Hill to Eugene and Cecille (Stitham) Bell. She still lives by herself and keeps her brain sharp by reading and doing jigsaw puzzles. Jelly beans are one of her special treats and she has a “gumball machine” filled with them near her kitchen table for when she is working on one of her puzzles.

“I have a cleaning lady who comes in every day and checks on me, and my hairdresser comes by once a week,” she said. “I am very lucky. I don’t have Alzheimer’s and I have my health.”

Her nephew, John Alexander, lives below Taylor in a duplex home on Pleasant Street, not far from where she grew up on Highland Avenue.

Her three sisters are deceased. “I’m the only one left,” she said. “I am the tough one.”

She married Glen Taylor and the couple had five children, three of whom are deceased. Her daughter Judy died of pancreatic cancer; David suffered a fatal heart attack; and Michael died of an overdose. “They tried to tell me otherwise, but I know better,” Madeline said. “Being his mother, I knew.”

Her husband Glen was a bulldozer operator for a number of years, which helped put food on the table and clothes on the children, she said.

In her younger days, Taylor was a dancing instructor in Houlton, complete with her own home studio on Maple Street. She fondly recalls averaging close to 50 students a year in her dancing classes. As a child she took dancing lessons and loved them, so she decided to pass along that knowledge to a younger generation.

“I had to give it up, though, because it started hurting my feet,” she said. “You know … arthritis.”

She was also a full-time mom, taking care of her five children, which she says “kept me pretty busy. That was my real job.”

Much has changed over the past century, which is something Taylor does not take lightly.

“I lived through two World Wars. Things are so different now,” she said. “I can’t get into all this technology. I’m too old to learn that, and I don’t really want to anyway. I don’t have a computer.”

She does not own a dishwasher, still cooks the majority of her own meals and watches little television, other than the news and weather.

Taylor said she recalls a drastically different downtown Houlton. In Market Square, for example, the KeyBank building was once a Woolworth department store. There were two movie theaters, a large hotel called “the Snell House” as well as the Northland Hotel, which was situated where Bangor Savings Bank is today.

Taylor said growing up during the Great Depression taught her the value of going without. “It was tough, but I didn’t realize how poor we were,” she said. “I had what I needed — something to eat and something to wear. We didn’t have much. My mother worked for $10 a week and supported all of us. My stepfather lost a lot of his money during the big (Stock Market) crash. So we pretty much went without.”

All of her children picked potatoes in the fall to help buy winter clothes, she said.

“It was important to teach the kids a work ethic,” she said. “They needed to know if they wanted something, they had to work for it. Kids today are given everything. There is no work ethic and they don’t know what it is like to go without.”

A cold front will cross the region today associated with the upper trough and low which will absorb the remnants of Isaias in Canada.
Our Sponsors END_OF_DOCUMENT_TOKEN_TO_BE_REPLACED