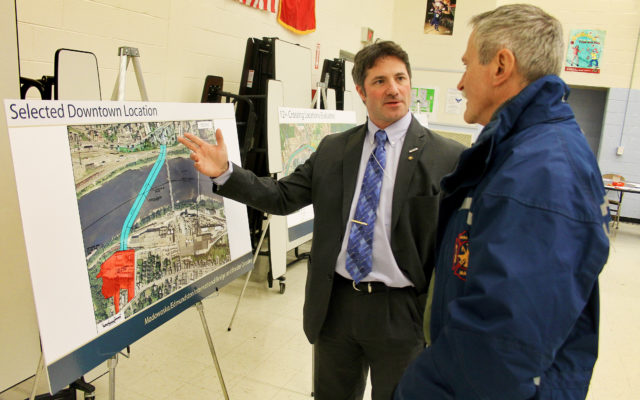 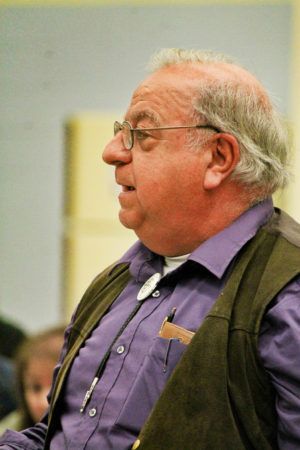 A crowd of more than 100 turned out for a public meeting in Madawaska to hear details of the proposal. A similar session took place earlier Wednesday in Edmundston.

The current bridge was built in 1921 and is more than 20 years past the typical lifespan for bridges of its type. Heavy commercial traffic on the existing bridge was halted in October when authorities imposed a reduced weight restriction of five tons, due to concerns about structural integrity.

The bridge replacement project already had been in the works, but the new safety concerns highlighted the need. Though project and community leaders considered repairing the existing bridge, they did not favor that option. 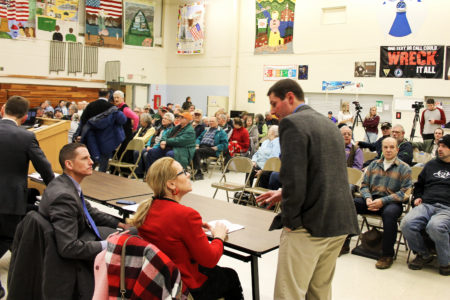 Residents have been particularly interested in the location of the new bridge. Plans presented Wednesday revealed the proposed bridge location to be essentially where it is today, the major difference being that the Madawaska end of the new bridge would be located approximately 1,300 feet upriver of its current location. The Canadian bridge terminus would remain unchanged.

According to Bill Plumpton, an engineer with consulting firm Gannett Fleming, which is assisting with the current bridge feasibility study, the Canadian government wants to keep its current port of entry facility where it is. A change in Madawaska’s terminus, Plumpton said, is driven by environmental permitting challenges and excessive cost of locating a new bridge in any of the several other sites outside of downtown Madawaska.

“That wetlands permitting would have been prohibitive,” Plumpton said following the meeting.

Siting a new bridge where it maintains a connection between the two downtown areas was important, Plumpton said, and was also a priority of community leaders on both sides.

Picard said he understood that locating the new bridge and both ports of entry at locations well outside of downtown would have also pushed back its completion date by several years.

Officials anticipate the final bridge design to be completed sometime next year. Actual construction could begin in 2020, with projected completion in 2022.

“That is an extremely ambitious schedule,” Plumpton warned audience members. Those dates would change if permitting or engineering problems arose, he said. 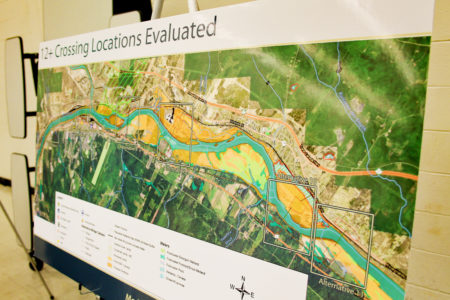 Engineers and planners considered more than a dozen possible locations for a new international bridge on Madawaska, as seen in this display. Officials presented the latest project information at a public meeting, Wednesday, at Madawaska High School. (Don Eno | SJVT/FhF)

Madawaska and Edmundston municipal leaders recently signed a joint resolution declaring a reference for retaining a downtown location for the new bridge. The resolution also calls for a bridge design with “landmark aesthetic qualities” that acknowledge the region’s history and culture.

Plumpton said the bridge would be two lanes wide and would include a sidewalk, but beyond that no preliminary designs exist.

The downtown location does have some detractors, however, who would prefer the heavy commercial traffic and tractor trailers be routed away from the immediate downtown area.

Resident Dave Levesque, in the audience, commented that officials have waited too long to replace the bridge, and that locating the new span downtown would only continue the truck congestion.

“You are not solving any problems,” Levesque said.

Picard said prior to the start of the meeting that some people at the Edmundston meeting and expressed similar concerns.

Overall, though, residents at Madawaska’s public meeting seemed receptive to the proposal.

Plumpton said the preliminary design phase for the bridge is only just beginning and some specific questions, including cost, could not be answered at this time.

“We are in the early stages,” he said. “Your questions and comments are valuable.”
“I’m glad to see the big turnout here in Madawaska,” Picard said.

“The turnout was overwhelming,” said Patrick Sclafani, a spokesperson with the U.S. General Services Administration’s Boston office, “but in a good way.”

Public comment and suggestions from those who will actually be using the new bridge and new port facility are vital to the process, he said. 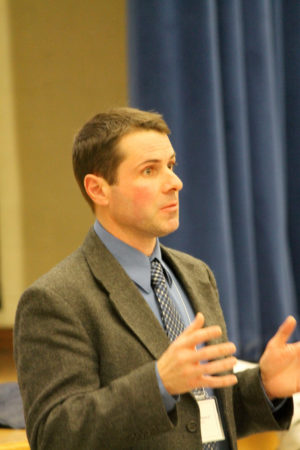 The bridge project is tied into the construction of a new customs facility on the U.S. side, which will replace the current building. That facility, originally constructed in 1939, is undersized and substandard, officials said.

The proposed location for the new U.S. customs facility is on land the U.S. General Services Administration owns to the west of Mill Street, which Twin Rivers Paper Company currently uses as a truck yard. Technically, GSA will own the U.S. Port of Entry facility and the U.S. Customs and Border Protection will rent it.

Information provided Wednesday did not include details on the Customs building or information about any needed changes to road access to the bridge. Plumpton emphasized designers will work out those details, and added that additional public meetings about the project would be scheduled.

While the Maine Department of Transportation is taking the lead on the bridge project, planners and engineers will work with stakeholders on both sides of the border to come up with a plan.

Maine DOT and the New Brunswick Department of Transportation and Infrastructure will split the cost for the bridge itself equally. GSA will fund construction of the new U.S. port facility.

Plumpton assured those at Wednesday’s meeting that the existing bridge was “absolutely safe.” The weight limit of five tons is per vehicle, and is not the total weight limit the bridge can safety bear, he added.

For more information on the project, or to leave questions or suggestions, visit the Maine DOT’s dedicated webpage at http://www.maine.gov/mdot/planning/studies/meib/. 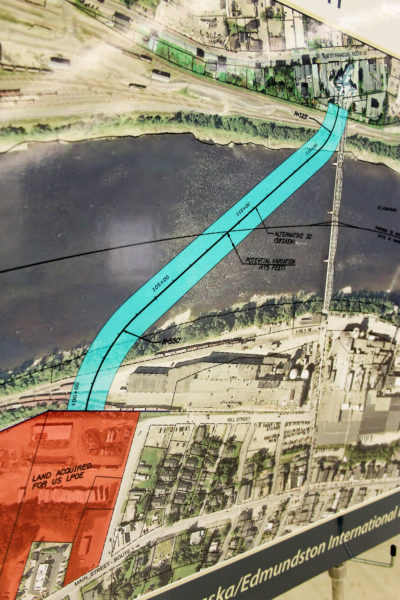 Maine Department of Transportation has proposed this downtown location, indicated in blue, for the construction of a replacement bridge between Madawaska and Edmundston, New Brunswick. Officials presented the latest project information at a public meeting, Wednesday, at Madawaska High School. (Don Eno | SJVT/FhF)

As the Maine Turnpike expects 1 million travelers alone over the Labor Day weekend, policymakers are gearing up for a sprint to solve one of the state’s most intractable problems: a long-standing — and growing — transportation funding gap.
Apex Weather END_OF_DOCUMENT_TOKEN_TO_BE_REPLACED

The Valley will receive an inch or less of accumulation from Thursday's system based on current forecast model data.
Our Sponsors END_OF_DOCUMENT_TOKEN_TO_BE_REPLACED