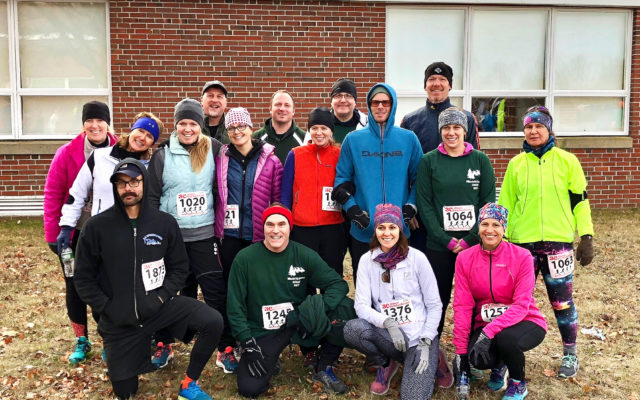 SAD 27 teachers, staffers bond in preparing for, running half marathon in Millinocket

Margaret Guimond, a French teacher at Fort Kent Community High School and Valley Rivers Middle School, was the genesis of the group.

“It was just an idea I had and shared with some colleagues,” Guimond said Tuesday. “I essentially asked, ‘What if we ran a half marathon together?’ Surprisingly, their feedback was great and it snowballed from there.”

For Guimond, who is a recreational runner, completing the 13.1-mile long half marathon was a major goal. That goal was shared by several others in the district who also soon expressed an interest in taking part.

“I ended up asking all district employees, and 27 actually signed up,” said Guimond. Due to various reasons some had to back out of this particular event, but are still interested in future endeavours, she said.

Guimond is completing a graduate degree at the University of Farmington with a focus on administrative leadership in education. The idea of an SAD 27 running team dovetailed well with her studies.

“I thought doing this particular half marathon, which is free, would be a great way for us to work together, celebrate each other’s successes and take pride in our district,” Guimond said. 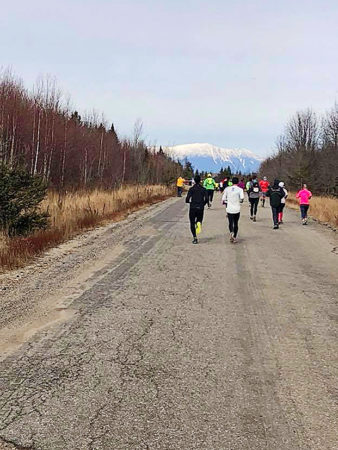 Katahdin looms over runners along the Golden Road during Saturday’s Millinocket Marathon and Half Marathon races. (Courtesy of Donald Chouinard)

All of these things matter, commented Guimond, when it comes to school culture and having an impact on student success.

“I was thinking about how so many 21st century careers, that we are potentially preparing our students for, focus so much on staff relationships,” she said.

“I think the event was better than what I envisioned,” Guimond said. “Everyone finished, with a smile on their face.”

Preparing for the event was part of the process. Guimond began asking colleagues about running in it back in April.

“We had summer lakeside barbecues, T shirts made, a school pep rally for the staff, not to mention several group runs that were shared among participants,” said Guimond. “The personal growth for each person was pretty amazing too.”

That sentiment was shared by Superintendent Ben Siris, who also took part in the run.

“For those of us who were present in Millinocket on Saturday, it was a humbling experience and we are grateful to be part of it,” Sirois said on Tuesday. “We hope this is the first of many staff building excursions the SAD 27 staff will engage in in the upcoming years.”

“It was incredible,” English teacher Donald Chouinard said of the group experience.

Having the school superintendent and the high school principal in the group, and having staff from every department in the district, really made for a great experience, he said.

“The first things students said to me on Monday was,’Mr. Chouinard, how did you do?’” he said.

Last week, in the days leading up to the race, students had created posters of encouragement for the participatns headed to Millinocket, which lined the halls of the school, said Chouinard.

“Usually, it’s the other way around,” he said.

“The feedback has been great,” Guimond said. “Everyone was proud of their work and the district. I think showing students how to take on hard goals as adults is not only our duty, but necessary in education.”

The Fort Kent group also had some support in Millinocket from non-runners.

The course, which starts and ends in downtown Millinocket, took runners out on the Golden Road and back to town via the Bates Road. Along the way there were stunning views of Katahdin, as well as volunteers at aid stations and cheering spectators.

Nearly, 1,200 runners took part in the races on Saturday, in what has become a destination for athletes and recreational runners from around the United States.

“The greater Millinocket community was supportive and we appreciated their hospitality,” Sirois said.

“The run was great for me,” said Guimond, who finished in under three hours. “I think what stood out the most were the times when my colleagues refused to leave me behind and kept by my side during the hard hills.”

Chouinard’s time for the half marathon was 1:42:40. “I was pleased,” said Chouinard.

“I was worried,” Chouinard said, referring to the potential for adverse winter weather on race day. “I heard that last year was blustery. What we got (Saturday) was a perfect day for running.”

Chouinard said he thinks the bonding and teamwork will last and encompass things other than running.

Guimond shares that sense of bonding and sees a future for SAD 27 colleagues gathering for other activities.

“Some have mentioned hiking Katahdin, whitewater rafting or skydiving,” she said. “I think we have a lot of creative staff members in our district, so nothing would surprise me.”

Heavy snow is expected to overspread the Valley this afternoon and continue into the evening hours.
Crown Politics END_OF_DOCUMENT_TOKEN_TO_BE_REPLACED

Maine’s longest serving legislator, Martin was first elected to the Maine House of Representatives in 1964 when he was 23.
Our Sponsors END_OF_DOCUMENT_TOKEN_TO_BE_REPLACED