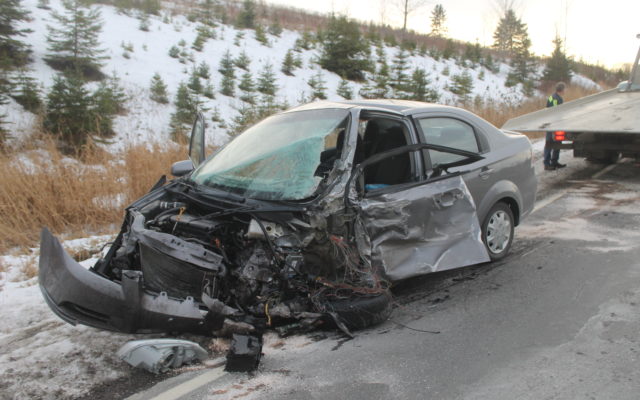 Cat on woman’s lap contributed to collision with school bus

Jessica Potila, SJVT / FhF Staff Writer • November 22, 2017
A cat distracted the driver, causing her to veer into the lane of an oncoming school bus filled with students on Route 161 Tuesday, according to police.

NEW CANADA, Maine — A cat distracted the driver, causing her to veer into the lane of an oncoming school bus filled with students on Route 161 Tuesday, according to police.

Alicia Fiordellisi, 19, of Wallagrass told police that she was driving with the cat in her lap and looked down when she felt a wet spot on her pants. When she looked back up, she had swerved into the opposite lane in front of the oncoming SAD 27 school bus, according to an accident summary by Trooper Nathan Desrosier of the Maine State Police. 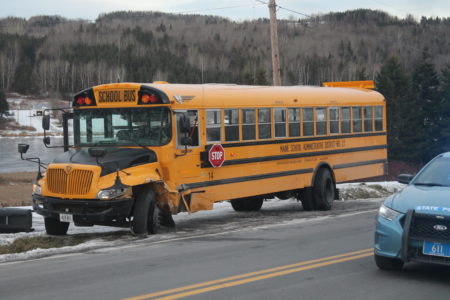 An SAD 27 bus carrying middle school students back to Fort Kent following a field trip to Caribou collided with a car near Daigle Pond in New Canada on Tuesday afternoon. School officials said the students and bus driver were all safe, but that eight of the students were taken to the hospital in Fort Kent as a precaution after they reported hitting their heads on the back of the bus seats. (Jessica Potila | SJVT/FhF)

The driver of the bus, Arnold Dubois, 69, of Fort Kent, “saw the vehicle coming and tried to take evasive action but was not able to avoid (Fiordellisi’s) vehicle,” the trooper reported.

The 58 seventh and eighth graders from Valley Rivers Middle School in Fort Kent who were on the bus were returning from a field trip in Caribou at the time of the crash, which happened near Daigle Pond. The students had visited the National Weather Service facility and Nylander Museum earlier in the day. A second bus of students on the same field trip was a few minutes behind and not involved in the accident.

No students were seriously injured, but eight were taken to the hospital to be evaluated after they reported hitting their heads on the back of the bus seats during the accident, SAD 27 school officials said Tuesday.

Fiordellisi was able to exit her vehicle of her own accord following the crash, but was transported to Northern Maine Medical Center in Fort Kent to receive treatment for injuries to her head and leg. Fiordellisi’s  injuries were not considered life threatening, according to the trooper.

The cat was killed in the crash.

Both the bus and car were disabled from the damage and had to be towed.

The investigation is ongoing and charges are pending, according to the summary report from state police. 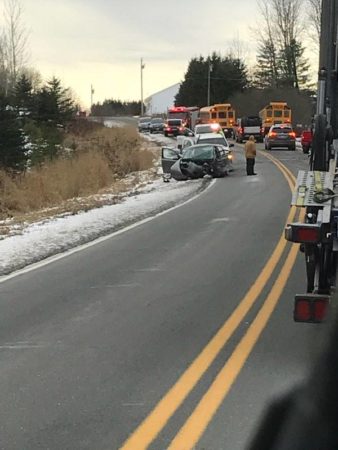 Route 161 in New Canada was temporarily blocked on Tuesday due to an accident involving a Maine School Administrative District 27 bus and a passenger car. (Courtesy of Joy Walker Theriault)

John Kaleta, principal of Fort Community High School and Valley Rivers Middle School, said late Tuesday afternoon that another bus had been dispatched to the scene to return the students to school where counselors were waiting to talk to anyone shaken up by the accident.

Although no classes were scheduled Wednesday because of the Thanksgiving holiday, Kaleta indicated that counselors also would  be on available at the school that day to talk with students who wanted to speak to someone.

At about 11 a.m. Wednesday, Kaleta stated in an email that nobody had yet used the counseling services.

He added that he had contacted that morning the families of the eight students who were evaluated at the hospital.

“Two young ladies are sore and achey but feeling okay,” he wrote. “One has whiplash and a sprained wrist. No concussions that I am aware of.”

“We are truly thankful that no one was seriously injured.”

Maine’s longest serving legislator, Martin was first elected to the Maine House of Representatives in 1964 when he was 23.
Our Sponsors END_OF_DOCUMENT_TOKEN_TO_BE_REPLACED