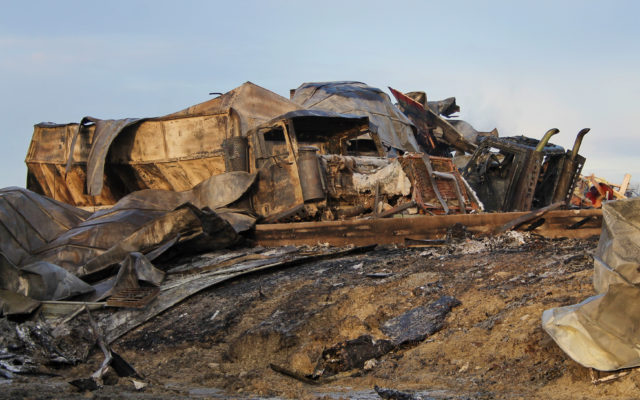 Several of the charred remains of the vehicles and pieces of equipment were visible Tuesday morning amidst the smoldering rubble.

Nearly 60 firefighters and more than a  dozen fire trucks and tankers from three departments battled the blaze for four hours, leaving only after midnight, according to Madawaska Fire Chief Jim Soucy.

No one was injured in the fire, according to Soucy. 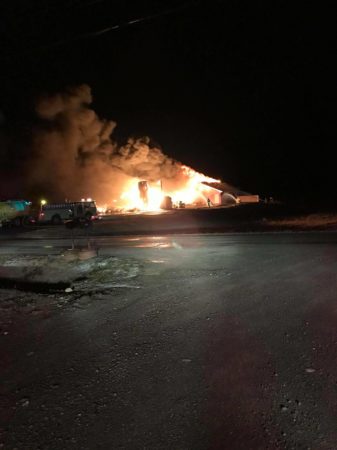 Building owner Scott Morin had just purchased the family potato farming business this summer from his father Marcel. The Morins had multiple pieces of equipment, including potato trucks, a payloader and forklifts in the building, the chief said. Some trucks and other equipment parked outside the building also were damaged.

Soucy could not confirm Tuesday morning whether the building was insured.

Scott Morin declined to comment on Tuesday morning as he and his father surveyed the scene.

“You don’t think it will happen,” Marcel Morin said. “Especially to you.”

The fire chief said he had not yet determined where or how the fire started, but added that it did not appear suspicious. Officials with the state Fire Marshal’s office are not involved in the investigation, Soucy said.

Morin’s father checked on the scene throughout the night, making sure things had not reignited, the chief said.

Firefighters from Frenchville and Grand Isle also brought equipment and helped fight the blaze. Water for the fire trucks was supplied by a dry hydrant drawing from Long Lake, just down the road.

“There were a few explosions,” Soucy said, adding that firefighters had no particularly dangerous problems fighting the fire.

The wind and intensity of the fire, however, caused concern about the embers drifting toward homes across the road, Soucy said. Firefighters eventually were able to make sure nearby buildings were not damaged and the fire was contained to the large metal storage building. 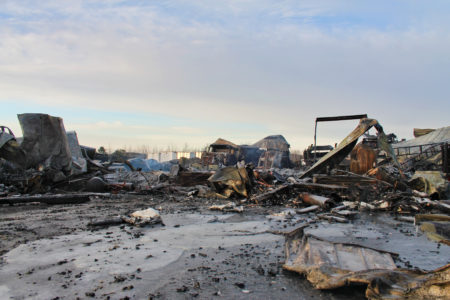 A fire Monday night at Morin Farms in St. David destroyed a storage building filed with trucks and farming equipment. All that remained Tuesday morning was smoldering rubble and the charred bodies of the vehicles and equipment. (Don Eno) 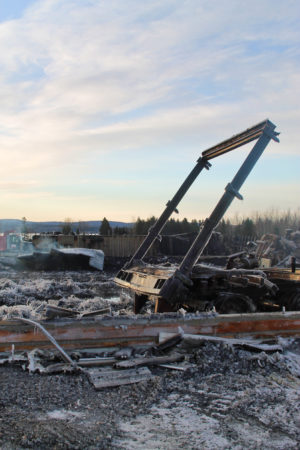 The frame of a truck box, charred and partially twisted by fire, sticks out of the rubble, Tuesday morning, at Morin Farms in St. David. A storage building on the farm was totally destroyed by fire on Monday night. (Don Eno) 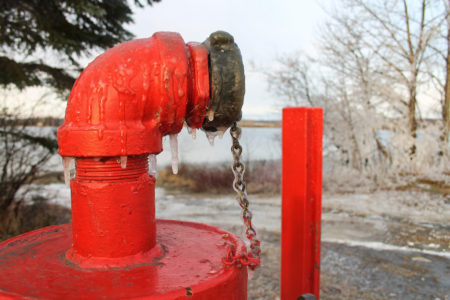 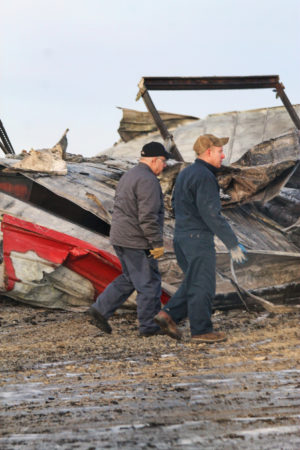 Marcel Morin, left, and his son Scott, of Morin Farms in St. David, survey the charred remains of their storage building and equipment on Tuesday morning. The building and its contents were destroyed in a fire Monday night. (Don Eno)

Cloudiness in the region Thursday afternoon along with a slight chance for isolated showers Thursday night and Friday.
Crown Politics END_OF_DOCUMENT_TOKEN_TO_BE_REPLACED