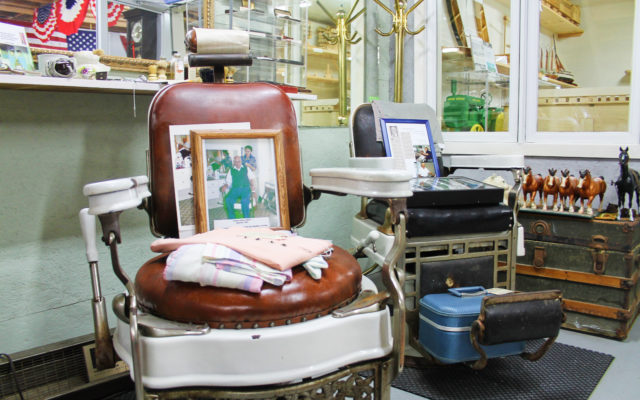 Don Eno, SJVT / FhF Staff Writer • July 2, 2017
Gloria Gervais visited the Ste. Agathe Historical Society museum Tuesday to look over information about a relative who was among the local men who went off to fight in WWI. 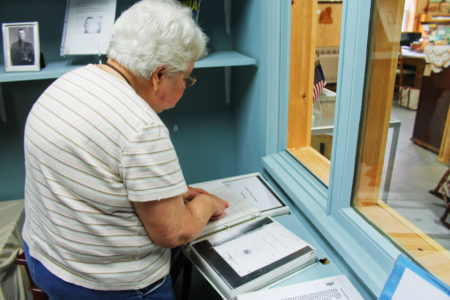 ST. AGATHA, Maine — Gloria Gervais visited the Ste. Agathe Historical Society museum Tuesday to look over information about a relative who was among the local men who went off to fight in WWI.

Gervais’ uncle, Eddie Plourde, was killed in action while serving in France, though precisely where is not known, she said.

The 1914-18 conflict, which engulfed Europe and eventually pulled in soldiers from across America, is this year’s featured exhibit at the society’s facility on Main Street.

The WWI exhibit features information and photos of several local men who served during the conflict, as well as the broader historical context of the times. The theme of the exhibit changes each year.

Based on information she found visiting a military archive in Missouri, Gervais said she thinks he was killed in southern France. She was reviewing the information the society had to see if her own research would be a useful addition.

Historical documents, photos and personal papers are among the items to be found at the society’s museum. The building also houses hundreds of items ranging from barber chairs to military and religious uniforms, and from kitchenware to farm machinery.

The society is celebrating its 40th anniversary this year. During that time, volunteers, residents and researchers have acquired a vast assortment of artifacts.

Situated just behind the historic Marquis Home, which dates to the late 1800s, the museum also hosts “Textile Thursdays” throughout the summer months. These craft days include activities such as basket weaving, pottery, candle making and silk painting.

There is no fee to visit the society, which relies mainly on donations and grants. The museum or preservation center, staffed by volunteers, is open from 1 to 4 p.m., Tuesday through Sunday each summer, and closes Labor Day weekend.

More information about the Ste. Agathe Historical Society may be found by visiting its Facebook page or by calling Terry Ouellette at  543-6911.

Heavy snow is expected to overspread the Valley this afternoon and continue into the evening hours.
Crown Politics END_OF_DOCUMENT_TOKEN_TO_BE_REPLACED

Maine’s longest serving legislator, Martin was first elected to the Maine House of Representatives in 1964 when he was 23.
Our Sponsors END_OF_DOCUMENT_TOKEN_TO_BE_REPLACED