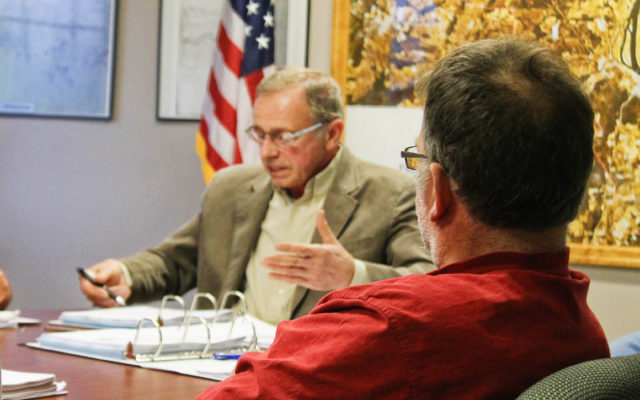 Don Eno, SJVT / FhF Staff Writer • May 3, 2017
Selectmen lamented the “flawed” ordinance they say essentially forced them to a accept Tuesday night a petition calling for the removal of board chair John Ezzy.

FRENCHVILLE, Maine — Selectmen lamented the “flawed” ordinance they say essentially forced them to a accept Tuesday night a petition calling for the removal of board chair John Ezzy.

As a result, town officials Wednesday scheduled the townwide recall election for June 13 at the Community Center.

Asserting that Ezzy has a conflict of interest and exerted undue influence on a controversial road project issue, petition organizers last month submitted the signatures of more than 140 residents, triggering the new recall process under an ordinance just approved at the annual town meeting in March.

The new ordinance leaves unspecified what constitutes reasonable criteria for removing an elected official from office. It also requires the Town Clerk to schedule a recall vote if enough valid signatures are submitted, regardless of whether or not the board of selectmen feel the reasons for the recall are justified. The clerk validated the signatures on April 20.

“If I don’t like your hat, then I can have you recalled,” selectmen Jamie Voisine asked fellow board member Craig Lawrence at Tuesday’s board meeting.

Lawrence and board member Yvon Dube voted Tuesday to accept the petition and Voisine voted against accepting it. Ezzy abstained and selectman Dan Collins was absent from the meeting.

At Tuesday’s meeting, Ezzy read the petition language and said it was riddled with fabrications.

“There are some serious, serious misstatements here,” said Ezzy, who has been embroiled in a controversy regarding whether Pelletier Avenue, which he lives on, is a public or private road, and whether or not the town should use public funds to improve and maintain it.

According to the petition language, Ezzy’s conflicts of interest include making misleading statements about his potential financial gains from improving the road; ignoring legal advice the board of selectmen received; offering free land in an attempt to garner votes at a selectmen’s meeting; submitting false documents as to the record of ownership and easements for the road; and threatening to prevent other road work in the community if his section of Pelletier Avenue is not paved.

“We know that half of them are false,” Voisine commented in reference to the petitioners’ claims. “So, the board cannot accept it.”

“They will just come back with another petition,” Dube said. “It could go on forever.”

“I still won’t vote for a petition that is inaccurate,” said Voisine.

Dube said that some of the claims in the petition have merit and some do not.

“Do you think it’s right for us to accept an ordinance if it’s based on false information,” Ezzy asked board members.

“I can interpret it one way and you can see it another way,” Dube responded.

Nicole St. Pierre, one of the people who circulated the recall petition, told board members that many people who signed it were not interested in reading the petition language, but were in favor of removing Ezzy from office.

“People were saying ‘Give me that.’,” said St. Pierre. “They were just happy to get rid of you. They see what you are doing, John.”

“Even if I disagree with you,” Lawrence told Ezzy, “I don’t think anyone should be railroaded, and that’s what this ordinance does.” Lawrence said the ordinance provides no way for the accused to face his accusers and needs to be changed. The recall ordinance lacks a provision requiring or allowing for a hearing or any public meeting prior to the recall vote.

Despite his misgivings about the ordinance and its recall process, Lawrence, who has disagreed with Ezzy on the legality of the road project, ultimately voted to accept the petition.

Town Manager Ryan E. Pelletier declined Wednesday morning to comment on the merits of the petition, but said he is looking forward to a “resolution.”

“I want a positive outcome, and to keep the community moving forward,” said Pelletier.

The town manager said the recall ordinance will be reviewed by the board again in the near future, although there is little selectmen can do at this point to address its flaws as it pertains to Ezzy’s case.

Ezzy, whose current term expires in March, 2018, said Wednesday he has no plans at the time to resign prior to the upcoming recall election. “I don’t feel I have done anything that would make me resign,” he said.

Although Ezzy has consulted with his attorney on what his options are, he said Wednesday that he doesn’t think there is a way he can fight the ordinance or the recall vote.

Cloudiness in the region Thursday afternoon along with a slight chance for isolated showers Thursday night and Friday.
Crown Politics END_OF_DOCUMENT_TOKEN_TO_BE_REPLACED