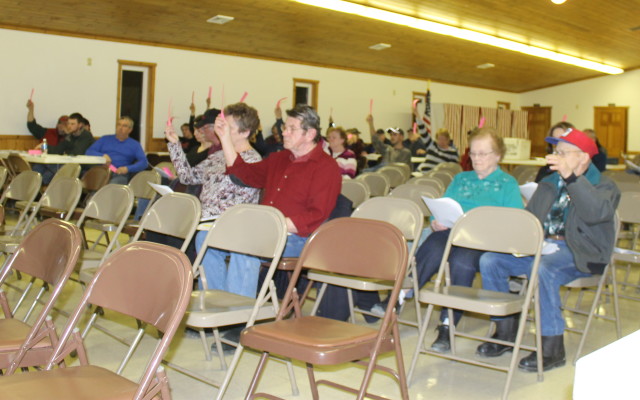 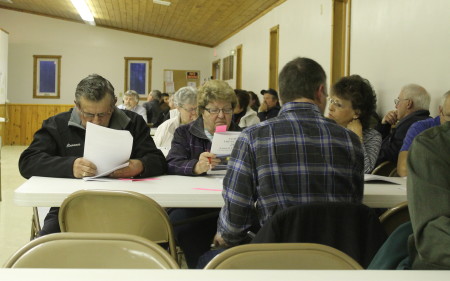 Residents at Frenchville’s annual town meeting, Tuesday, March 21, look over proposed ordinance language prior to the start of the meeting. (Don Eno | SJVT/FhF)

FRENCHVILLE, Maine — Frenchville residents raised issues of the trust placed in elected officials and the value of the election process itself, Tuesday evening, March 21, as they discussed a proposed ordinance to establish a formal process by which a selectman or any elected official could be removed from office for “dereliction of duty” or “conflict of interest.”

By a vote of 39-12, voters approved the ordinance, but not before some contentious discussion at their annual town meeting.

Resident Dave Pelletier asked why such a removal process was needed, if voters elect people they trust.

“We might as well not have any board of selectmen if we don’t trust any of them,” Pelletier commented from the floor during discussion on a motion to approve the ordinance. “This article doesn’t make any sense at all,” he added.

Former selectman Paul Bernier said the ordinance was worthwhile and that having a formal process to remove a selectmen could be useful one, but commented that the timing of the ordinance proposal was “odd,” considering that current selectman John Ezzy has been accused by some residents of having a conflict of interest concerning a town road project initiated last year.

When speakers commented specifically on the issue of Ezzy and the road project, meeting moderator Kevin Lavoie called a point of order and reminded audience members the discussion needed to be limited to the ordinance, which does not mention any specific persons or projects.

Resident Carl Sousa said that a selectman may change his or her stance on issues after they are elected, which may lead to policies and actions some voters do not agree with.

“Are we just stuck with them,” for the remainder of their term, Sousa asked.

Lavoie asked whether or not the regular ballot box was a recourse to address such concerns.

Sousa expressed concern that regular elections are too infrequent. “They can still do a lot of damage during that time,” he said.

“This would be a way to protect voters, for the future,” added resident Cleo Ouellette, speaking from the floor.

Ezzy attempted to address the issue of conflict of interest, in a general way, during the debate. However, a motion from the floor to cease further discussion on the article was seconded and approved, and the selectman was cut off.

The ordinance, which goes into effect immediately, establishes a removal process for “any selectman, assessor, planning board member or other elected official.”

That process starts with a citizen petition, which must contain valid signatures from registered voters, equal to 25 percent of votes cast in Frenchville in the last gubernatorial election. The town clerk has 10 days to certify whether or not the petition is valid.

In the case of a validated petition, the board of selectmen is required to hold a recall election. If the recall vote results in the removal of the elected official, it is effective immediately, and the resulting vacancy is to be filled in accordance with existing Maine statutes.

The full text of the ordinance may be viewed at the Frenchville town office.

Three candidates are vying for two seats on the Fort Kent Town Council. Voters will decide which of the three -- Corey Pelletier, Brandon Dayton or Andrew Caron -- will get a seat during the town’s annual election on Monday, March 22.
Apex Weather END_OF_DOCUMENT_TOKEN_TO_BE_REPLACED

A warm front lifting across the region this morning will lead to increasing clouds with snow overspreading the area later this morning. A cold front will move through this afternoon with snow likely for a period before tapering off behind the front this evening with overnight lows occurring relatively early around midnight.
Our Sponsors END_OF_DOCUMENT_TOKEN_TO_BE_REPLACED