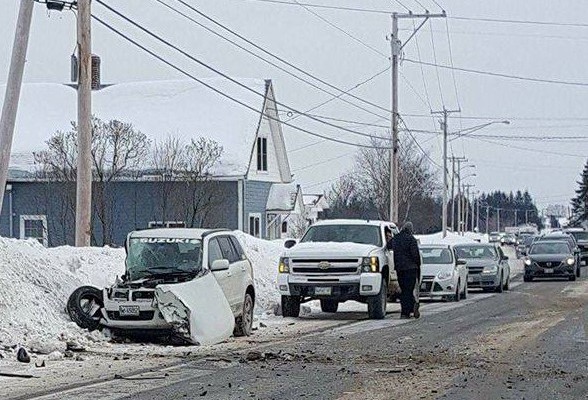 ST. DAVID, Maine — Madawaska police, Aroostook County Sheriff’s deputies, the Grand Isle Fire Department and emergency services responded to two related automobile accidents on US Route 1 late Saturday morning, February 11. Police are still investigating the accidents and are trying to determine why a man was driving in the wrong lane for several miles shortly before 11 a.m. 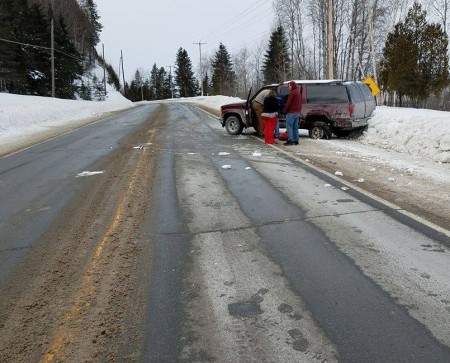 Katrina Hazelton of Van Buren was driving this SUV on U.S. Route 1 late Saturday morning, Feb. 11, in St. David, when she collided with a vehicle being driven by Douglas Hise, in an attempt to avoid Hise, who was traveling in the wrong lane, according to police. (Contributed photo)

According to Lt. Jamie Pelletier of the Madawaska Police Department, Douglas Hise, 49, of Caribou, was driving a Cadillac Escalade northbound near the Grand Isle and Madawaska townline when he veered into and continued driving in the left southbound lane into oncoming traffic. Multiple cars avoided Hise by swerving into the opposite lane. Katrina Hazelton, 38, of Van Buren, veered right, however, and tried to pass between Hise and the snowbank, Pelletier said.

Hise struck the rear driver’s side of Hazelton’s GMC Suburban, spinning her vehicle around and back into the roadway. Hazelton struck the opposite snowbank, and her vehicle came to rest. Hise continued driving toward Madawaska.

An ambulance transported Hazelton to Cary Medical Center in Caribou with “some back pain,” Pelletier said.

Hise continued driving in the wrong lane of Route 1. “Traffic was avoiding him” said Pelletier.

Both Hise’s and Beaulieu’s vehicles were disabled following the collision. Damage to both vehicles was “pretty significant” Pelletier said.
An ambulance also transported Hise to NMMC via ambulance. A private vehicle took Beaulieu to the hospital. Pelletier said neither man appeared to have sustained life-threatening injuries.

Pelletier said Hise did not initially appear to be intoxicated or under the influence. Police said Hise was visiting a friend in Grand Isle. Police are unsure at this time what caused Hise to drive erratically and travel in the wrong lane. The accidents remain under investigation. 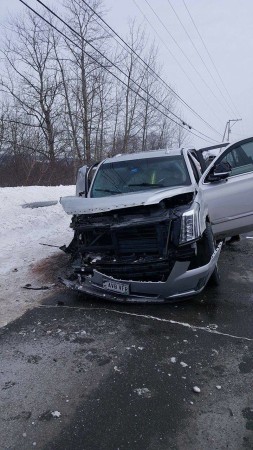 According to police, Douglas Hise, was driving this Cadillac Escalade in the wrong lane on U.S. Route 1, late Saturday morning, Feb. 11, in St. David, when he struck two vehicles within a few miles of one another. (Contributed photo)

Members of the Madawaska Fire Department also responded to the accidents. Police had temporarily closed off a section of the highway, rerouting people through Madawaska and St. David backroads.

Fiddlehead Focus will provide further information as it becomes available.

A cold front moves through today with scattered showers that will taper off this evening as high pressure builds into the region with partly cloudy skies.
Crown Politics END_OF_DOCUMENT_TOKEN_TO_BE_REPLACED

All five candidates running for two seats on the Fort Kent Town Council gathered at a live question and answer forum.
Our Sponsors END_OF_DOCUMENT_TOKEN_TO_BE_REPLACED