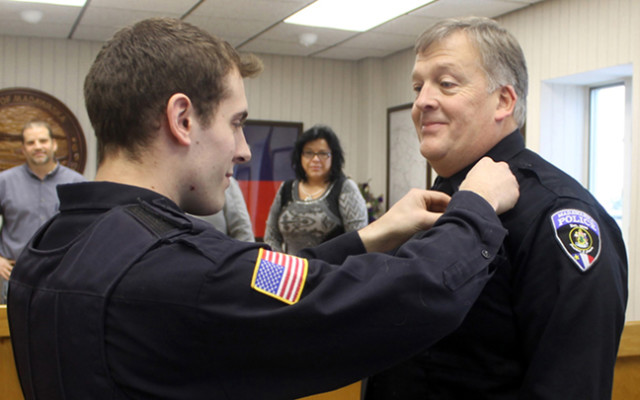 Jessica Potila, SJVT / FhF Staff Writer • December 23, 2016
Madawaska’s newest police chief said he aims to be accessible to members of the public. Lieutenant Ross Dubois, a 28-year veteran of the Madawaska Police Department will officially take over as chief of the department on January 1.

MADAWASKA, Maine — Madawaska’s newest police chief said he aims to be accessible to members of the public. Lieutenant Ross Dubois, a 28-year veteran of the Madawaska Police Department will officially take over as chief of the department on January 1, 2017.

“I plan on having an open door policy, so if any citizen wants to come in and just say ‘hi’ or discuss something, they’re more than welcome to stop in, no appointment necessary,” he said.

The Madawaska board of directors voted unanimously at a public meeting on Thursday, December 22 to confirm Town Manager Ryan Pelletier’s nomination of Dubois, who is 51 years old. The position had remained open since former Chief Carroll Theriault retired in November.

“It’s a happy day for us, it’s a good day,” said board chair Brian Thibeault.

Tim Dubois, Ross Dubois’ son, pinned the chief’s badge on his father’s chest before members of the board and residents of the town on Thursday. Tim Dubois serves as an officer with the Caribou Police Department.

The younger Dubois said he chose a career in law enforcement in order to follow in his father’s footsteps. Ross Dubois also placed a pin on his son when he graduated from the police academy in 2014.

“He’s a role model for me,” Tim Dubois said of the newly appointed chief. “He’s a good leader. He knows what he’s doing. If anybody ever has any questions they can go to him. He knows a lot about being a police officer and about the town of Madawaska on top of that.”

While accepting the appointment, Dubois thanked Pelletier and the board members, “for giving me the opportunity to lead what I believe is the finest police department in the State of Maine.”

He also thanked his wife of 29 years, Karen Dubois, who was unable to attend the meeting due to her responsibilities as a seventh grade teacher at Van Buren Middle School.
“I know it’s difficult to be the spouse of a police officer,” he said.

Together the Dubois have three children: Tim, Chris, a captain in the United States Army, and Britany, a home health worker. They also have five grandchildren.

Karen Dubois expressed confidence in her husband’s abilities to perform as a chief, and described him as the “perfect fit for the position.”

“As a leader, Ross would never ask anyone to do more than he is willing to do himself. He is a good listener and has an uncanny ability to think quickly and put things in perspective — allowing for a quick and conscientious ability to make good decisions,” she said. “He has always done his job well and looked for ways to improve his abilities as a police officer and maintain good relationships with his co-workers and the community.”

Pelletier said Dubois was selected from six initial applicants, three of whom were chosen to interview for the position. He described Dubois as “easygoing and friendly,” and said he has an ideal personality for community policing, a model he said the town aspires to achieve.

“He tries to resolve issues effectively without coming across as a mean guy,” Pelletier said.

At the meeting, Madawaska resident Jim Madore expressed approval for the choice of chief.
“I’ve known Chief Dubois for a number of years. I think it was the perfect selection,” Madore said. “He has over 28 years with the department. He knows the town. He knows the people.”

Both Pelletier and Dubois said that the most challenging issues the department currently faces are drug use and domestic violence among members of the public.

Dubois said among his first priorities as chief will be “building the relationship with the community, so we’re all working together toward the goal of reducing crime and increasing the quality of life in Madawaska.”

Pelletier said that in the near future the department will reach out to students within the community schools.

“We want kids to know that if they have an issue they can go to an officer and talk about what’s going on,” he said.

When he’s off duty, Dubois enjoys spending time with his three granddaughters and two grandsons.

He said he is looking forward to serving Madawaska as chief of police.

“This is a great community to work for,” he said.

Maine is more than eight months into Medicaid expansion under the federal Affordable Care Act and trends around who is enrolling and where they live are starting to emerge, bucking some expectations and pointing out access challenges.
Apex Weather END_OF_DOCUMENT_TOKEN_TO_BE_REPLACED

A coastal low is expected to produce heavy snow across much of central and northern Maine Thursday night and Friday.
Campaign Corner END_OF_DOCUMENT_TOKEN_TO_BE_REPLACED

Dale Crafts filed his nomination papers for Feb. 21 with the Secretary of State to officially be placed on the primary ballot on June 9, 2020, for the U.S. House of Representatives 2nd District race.
Our Sponsors END_OF_DOCUMENT_TOKEN_TO_BE_REPLACED