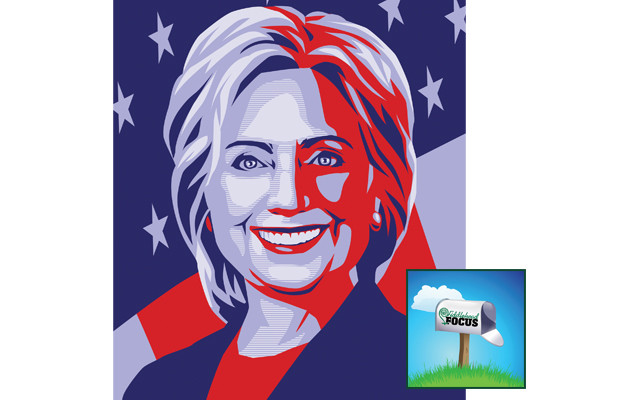 Letter to the editor: The people have spoken, Hillary won the popular vote

To the editor: Ok. Ok. I may be a bit delusional Mr. St. Germain. I honestly do believe at times I will meet a real Republican who really cares about the welfare of the poor and dispossessed, the very ones Jesus talks about in the gospels. I’m still waiting though.

This is in response to your letter “The People Have Spoken”, Nov 23, to my letter “The Trump Id Re-Do”, of the week before, in the SJVT. I do have to admit, Republicans do have a propensity to exaggerate a bit, love to distort facts, twist information, even make stuff up if it achieves their objective(s).
First, where did I say “… every single vote that Donald Trump got was from ‘White Christian Males’ “? I re-read my letter twice: It just isn’t there. It is totally made up.

Second, “… nobody that supported Trump at Hillary & Bernie’s rallies with guns”. I read my letter again: that is simply not stated by me. Mr. St. Germain: you make it seem like I did make that statement. I didn’t. In fact, I don’t even mention rallies at all.

You make this statement: ‘I know personally black people, gay people, women, Muslims, Democrats and people with LGBT that voted for Trump’. Seriously Robert, come on now. All these people reside in Fort Kent, and they all told you who they voted for?

On the Clinton probes and witch hunts: $20-plus million and counting, taxpayer dollars spent by Congress on Benghazi and end result nothing. FBI on Clinton Foundation: nothing. Trump is now making statements he will not pursue any investigations on Hillary (he can’t legally anyway). And guess what, there are now multiple investigations by the New York attorney general on Trump Foundations. You don’t mention any of this, do you?
Also I did not attack you personally. I did not say all Republicans are greedy. A heck a lot of them are, but I’m quite certain many are in the same dire situation as other Americans, but they are still all full of hate and animosity. But large proportions of rich Republicans are most certainly greedy and never can get enough. The Koch brother billionaires, for example, among many, spent over $200-plus million on elections that will help them get access to public lands that will net them billions in profits, all from public lands owned by all Americans.

Your service to your community is commendable. What does that have to do with greedy Republicans? I mentioned greedy Republicans who are destroying our Democracy, not you. And you have a job. That’s thanks to Pres. Obama and his jobs initiatives: 64 straight months of job growth adding 12.8 million jobs. Hope you get to keep it under Trump and then don’t blame Obama if you do lose it.

Advisors define the man and this coterie so far looks like a lot of hate-fueled ideologues surrounding Trump. Can’t wait for the rest of the Trump team. Even Jesus would not volunteer to be part of this hateful mélange.

No I don’t like the way things are going in America. And no, I will not move somewhere else. I was born here after all, French language and all. (It is so very un-America and authoritarian of you, Robert. America belongs to all red, white, black, brown Americans.) You love the 2nd, I love the 1st Amendment. It’s called free speech and the right to redress and petition. I will keep sending letters to the SJVT and address what I see is wrong with my country. I will not hide under a rock or move to Canada. I will not be intimidated by autocratic individuals like you and Republicans who want to shut down free speech.

The Americans who have voted for Trump have been taken for a ride. Already Trump is saying he will not be building any walls, he will not be deporting illegals or have Muslim bans, he will not be prosecuting Hillary, and he will not be ending Obamacare. No factories will be built. There will be no large magic job creations. And the white jobless will be getting more of the same. In fact, GOP has plans to eliminate Medicare and Social Security, that great safety net that takes care of all our seniors in their old age.

The greedy rich are even going after this, just as LePage here in Maine is going after programs that aid and assist the poor, elderly and needy. All the Trump promises say more about his voter base than anything else. And while you and Republicans will get even poorer under Trump, he is already working (and breaking ethics laws) to make himself immensely rich while in office, while America burns.

You say the people have spoken for Trump. No, the Electoral College has spoken for Trump. As of Nov. 27, Hillary actually has two-plus million popular votes more than Trump. Trump actually does not have a mandate to be president. The Electoral College says he won. The people (Democrats) actually say Hillary won. So even this, Robert, you and Republicans distort and contort to your own personal ideological world view.

Maine is more than eight months into Medicaid expansion under the federal Affordable Care Act and trends around who is enrolling and where they live are starting to emerge, bucking some expectations and pointing out access challenges.
Apex Weather END_OF_DOCUMENT_TOKEN_TO_BE_REPLACED

A coastal low is expected to produce heavy snow across much of central and northern Maine Thursday night and Friday.
Campaign Corner END_OF_DOCUMENT_TOKEN_TO_BE_REPLACED

Dale Crafts filed his nomination papers for Feb. 21 with the Secretary of State to officially be placed on the primary ballot on June 9, 2020, for the U.S. House of Representatives 2nd District race.
Our Sponsors END_OF_DOCUMENT_TOKEN_TO_BE_REPLACED