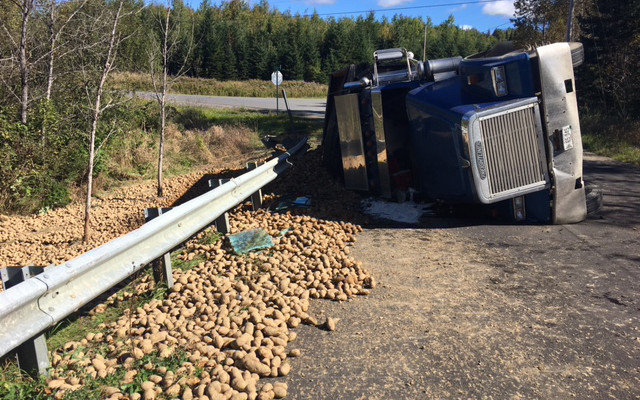 CONNOR TOWNSHIP, Maine — On Monday, Sept.26, 2016, at about 10:40 a.m. the Aroostook County Sheriff’s Office received a report of a crash at the intersection of Cote Road and Beaulieu Road in Connor Township.

According to a Monday afternoon press release, Sgt. Matt Cummings determined that Shawn Beaulieu, 44 of Caribou, was operating a 1994 Freightliner bulk truck, loaded with potatoes, westbound onto the Beaulieu Road. Beaulieu lost control of the truck and it rolled onto its side, spilling the load onto the roadway and into the ditch.

Beaulieu suffered non-life threatening injuries and Caribou Fire and Ambulance transported him to Cary Medical Center in Caribou. The truck, which Landeen Farms of New Sweden owns, sustained extensive damage and was towed from the scene.

While the cause of the crash remains under investigation, the ACSO report that speed may be a contributing factor. The Beaulieu Road was closed for about two hours while crews removed the vehicle and debris from the roadway.

Cloudiness in the region Thursday afternoon along with a slight chance for isolated showers Thursday night and Friday.
Crown Politics END_OF_DOCUMENT_TOKEN_TO_BE_REPLACED