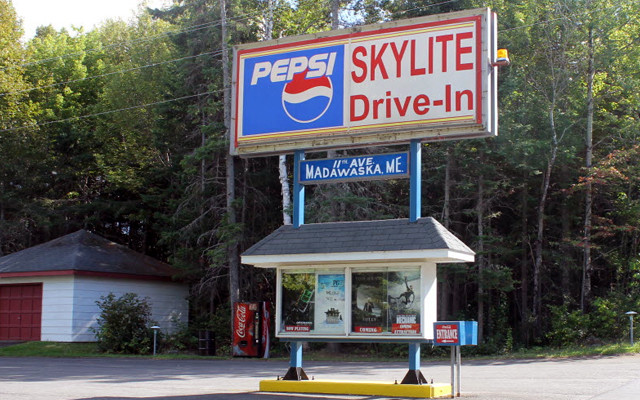 MADAWASKA, Maine — Since 1983, Donna and Gary Pelletier have owned and operated the Skylite Drive-In on 11th Avenue in Madawaska. The couple purchased the business from his father, and the traditional summer entertainment venue is now in its fifth generation, with the Pelletiers’ 5-year old granddaughter Kaitlyn Ferree handing out cool-pops to patrons during the warm weather months. 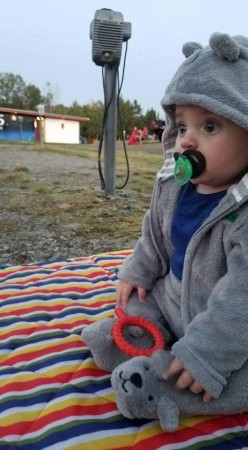 Mitchell Pelletier, 6-months, settles in for a night at the drive-in in Madawaska. Summer of 2016. (Contributed photo)

Modern technology is making its presence felt even in rural northern Maine, though, and so the Pelletiers switched to digital projection earlier this summer.

Thanks to Gary’s technical know-how, his wife said the installation of the new Barco system only took about 12 hours. The first film shown with the new system was “Batman vs. Superman.”

She said the picture quality is “100 percent better. … It’s better than what you have on TV at home.”

The Pelletiers said that audience feedback has been overwhelmingly positive. “We miss the sound of the old 35-millimeter projector, though,” Donna admitted. They decided to keep one of the old film projectors inside the drive-in booth – for nostalgia’s sake.

Although the couple had been considering going digital for the past few years, the decision to move to the format recently became a necessity, as distributors are largely moving away from supplying film reels to theaters.

Century Theater in Fort Kent converted to digital projection in mid-2014. In Presque Isle, the Braden Theater went digital in January of 2013.

Owners of drive-ins, which are dwindling in numbers, are perhaps less likely to invest in the new technology; however, drive-in movie venues in Saco and Bangor have gone digital within the past year. Donna Pelletier said she believes those are the only Maine drive-ins, besides the Skylite, which are now digital.

The Pelletiers also owned and operated the Fox Theater in Madawaska, which had shown films during the fall and winter seasons. The couple closed that in April of 2015.

When it came to learning the ins and outs of the new computer technology behind the digital projectors, Pelletier said having her children around was useful. “That has been a plus,” she said. The children – Austin, Evan and Jayme – all grew up helping their parents with the business. Pelletier said she has enjoyed making the theater and drive-in a family business.

With school having recently started in Madawaska and nearby communities, Pelletier said attendance on some nights has slowed down. “Kids have sports and school; but Sunday night we had a good crowd,” she said.

The Pelletiers normally close the drive-in by mid-September, although she said they have no definite date in mind yet this season. The lingering warm weather has likely helped business, as residents looking for one last summer night of fun consider packing up blankets and lawn chairs, and head over to the Skylite for a movie under the stars.

Tonight will be partly cloudy with lows dipping into the lower-to-mid-50s.
Crown Politics END_OF_DOCUMENT_TOKEN_TO_BE_REPLACED