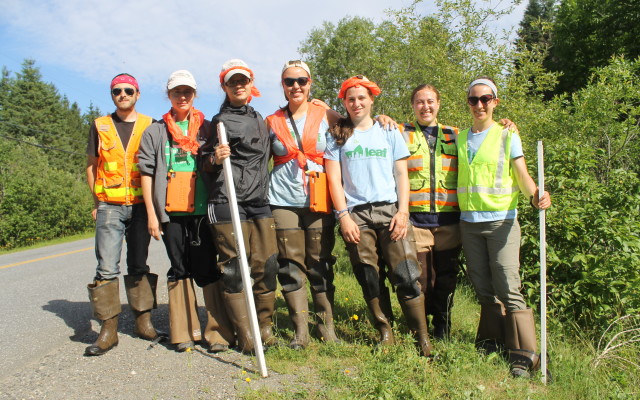 ST. DAVID, Maine — Four teenagers from Connecticut recently spent about a month in the St. John Valley, knee-deep in water under some of the hottest weather the summer has seen so far.

Students with The Nature Conservancy’s LEAF team relax at a The Other Maine cabin in Saint David on July 25, 2016. From left are (front row) Meridith Brewer, Maria Gaskell and Maleena Cruz. Sally Michaud is standing in the back. (SJVT / FhF – Don Eno)

“There have been some challenges,” said Sally Michaud, “but it’s been fun. I liked the team building, and we learned a lot.”

Now in it’s 22nd year, the LEAF program seeks to foster the next generation of conservation leaders by providing paid summer internships throughout the United States for students each July.

Sienna Tinsley, one of the inventory supervisors with TNC, said brook trout habitat may be unreachable by fish in some areas due to culverts that prevent fish passage. Surveying culverts systematically enables biologists and landowners to improve habitat and address problems.

The LEAF interns working on this inventory are involved in scientific research, learn about teamwork, and explore places they have never been to before.

The four students on the LEAF team also visited some college campuses while in Maine, including the University of Maine at Fort Kent.

For this year’s group, it was the first time any of them had been this far north into Maine.

The group stayed at a rental cabin at The Other Maine, on Gagnon Road in St. David, a location they jokingly referred to as “Almost Canada.”

The four high school students said they had never done this sort of intense environmental field work before. “I’ve done community gardens,” said Maleena Cruz, “but I didn’t know culverts were meant for fish, too.”

Each day, the group would head out and gather data on culverts, including precise GPS coordinates, culvert diameter and length, water depth and velocity in the culvert, and its elevation below the road surface.

Along with Erin Sweeney, their adult leader, the students also planned out each day and made sure they took care of lodging, food and travel. “They do all the cooking, cleaning and budgeting for the group,” Sweeney said.

The experience is an exercise in scientific research, team building and personal responsibility.

Each person on the team has certain tasks every day, which may include taking pictures, preparing food, navigating to the culvert sites, making sure everyone is staying hydrated and tracking their hours worked.

Last week, each member of the team seemed eager to take on their task of the day. Rising early, the team made breakfast then assembled on the front porch of the “Almost Canada” cabin, donned rubber hip waders and gathered their surveying equipment.
Dan Daigle, owner of The Other Maine, said this was the first time he has worked with a group like TNC to house researchers for multiple days.

“They have been great,” he said. “They are a nice bunch of girls.”

After 28 years at the paper mill in Madawaska, Daigle opened the cabin rentals, which guests use often in the summer for family reunions, vacations and fishing excursions. Daigle said the fall is also a busy time with moose hunters.

The location was ideal, not only because it offered a cabin big enough for the group, but also because of is central location in the St. John Valley, allowing easy access to the many culverts the group surveyed.

According to Tinsley, the culvert inventory project has surveyed more than 85 percent of the culverts on its target list in Maine.

The project, now in its 7th year, is a collaboration among TNC, Maine Audubon, the US. Fish and Wildlife Service and Natural Resources Conservation Service.

Tinsley said that the data gathered so far has helped planners improve fish passage in some areas, although the cost of replacing or repairing culverts is often too high for private landowners.

While a few students commented that hip waders and 80 degree weather do not exactly go well together, none of them had much to say about the infamous Maine flies or mosquitos. The students also had not yet decided if environmental science was a future career, but they all seemed to enjoy their time spent afield in Maine this summer.

“I look forward to doing more of this sort of stuff,” Cruz said.

As the Maine Turnpike expects 1 million travelers alone over the Labor Day weekend, policymakers are gearing up for a sprint to solve one of the state’s most intractable problems: a long-standing — and growing — transportation funding gap.
Apex Weather END_OF_DOCUMENT_TOKEN_TO_BE_REPLACED

A cold front moved through the Valley early this morning, and it will be followed by an Arctic cold front this afternoon.
Campaign Corner END_OF_DOCUMENT_TOKEN_TO_BE_REPLACED

Tomorrow, Saturday, Nov. 3, 2018, U.S. Senator Angus King (I-Maine) will continue his Get Out the Vote initiative in Aroostook County.
Our Sponsors END_OF_DOCUMENT_TOKEN_TO_BE_REPLACED