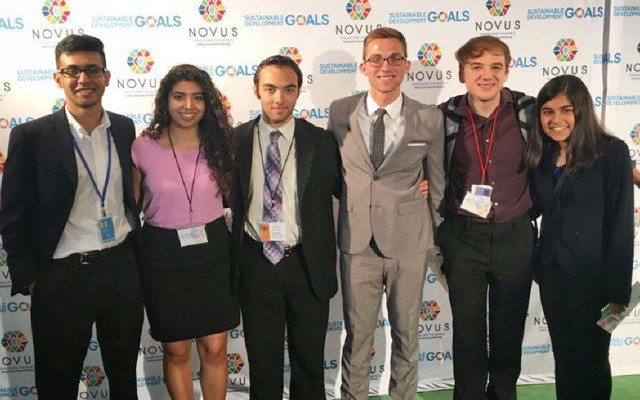 Jared Michaud of Fort Kent takes a chance to stand behind the podium at the United Nations on July 17, 2016. Michaud was serving as a youth delegate at the NOVUS Summit. (Photo courtesy of Jared Michaud)

“The event was focused around the UN’s 17 Sustainable Development Goals. I was chosen as a youth delegate for my work with goals 1 and 4, which have to do with eradicating poverty and providing access to quality education respectively,” Michaud said.

A 2015 Fort Kent Community High School graduate, Michaud is entering his second year at Yale University, and is a member of the Yale Alley Cats, a world travelling male a cappella group.

Michaud said he has also been working with an organization called YUDA Bands which aims to eradicate poverty through offering educational scholarships and resources to students in developing countries.

While at Fort Kent Community High School he organized a YUDA project which helped sponsor scholarships for three students. He said he plans to do the same at Yale during the upcoming school year. He will also begin working at the Long Wharf Theatre in New Haven as an education intern to bring theater and the arts to New Haven public school students.

He is spending his summer break working as a teaching assistant and residential counselor at the Bowdoin College Upward Bound program. Upward Bound provides an early college experience for low-income high-school students and students whose parents have not graduated from college.

“In my journeys abroad, I’ve seen so many different people and cultures, but the biggest lesson I’ve learned is that when it comes down to it, we are all fundamentally the same.” Michaud said. “If that’s the case, then the fact that I’m not living in extreme poverty and have access to an incredible education should move me to help create these opportunities for all.”

According to the Sustainable Development Goals, 836 million people worldwide live in extreme poverty, with one in five persons living on less than $1.25 per day and 103 million youth lacking basic literacy skills.

“In my mind, education and poverty go hand in hand. Education is a tool for which those living in poverty can use to escape, overcome, and achieve,” Michaud said. “And generally, I firmly believe that education can solve many of the problems in this world.”

A variety of innovators from around the world spoke at the Summit, which focused on combining technology with humanitarian actions to attain the Sustainable Development Goals outlined by the United Nations. The goals also include climate action, reduced inequalities and good health and well-being.

“If you take a look at the 17 Sustainable Development Goals, you will recognize that as Americans we are pretty fortunate to not have to worry too much about many of these issues. We must recognize these privileges and use the gratitude we feel to power us to make action globally,” Michaud said.

Michaud said he felt humbled by his United Nations experience, and that his St. John Valley upbringing remained close to his heart while at the Summit. “I wore an invisible badge saying ‘I’m from Fort Kent’ which added loads to my perspective and experiences,” he said. “I was filled with so much gratitude for all of the experiences and mentors that have impacted me throughout my life, eventually bringing me to this place.”

As the Maine Turnpike expects 1 million travelers alone over the Labor Day weekend, policymakers are gearing up for a sprint to solve one of the state’s most intractable problems: a long-standing — and growing — transportation funding gap.
Apex Weather END_OF_DOCUMENT_TOKEN_TO_BE_REPLACED

A strong Arctic cold front will push into the region from the northwest tomorrow with a chance for some light snow across the region.
Our Sponsors END_OF_DOCUMENT_TOKEN_TO_BE_REPLACED