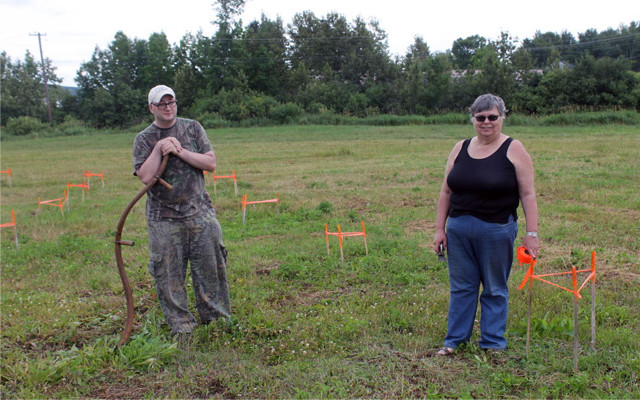 As a combination of nature and man-made inventions would have it, three of the trees did not make it to the end of July, bringing the total number of trees growing in the field next to Valley Cat Haven to 55.

“Two died and one got eaten by the mower,” said PAWS president Connie Michaud.

Following the lawn-mower incident, Michaud and PAWS volunteer Matt Stubbs have been tending to the trees the old-fashioned way – with a sickle once owned by Michaud’s grandfather, Noe Michaud.

Don Baker donated stakes to surround the trees while they establish their root systems, and Dustin Nadeau donated ribbon to mark the stakes.

Stubbs has volunteered at the no-kill, cat rescue organization for seven years, and has adopted three rescued animals of his own. “I love animals and I love to take care of them; especially animals that have been abandoned or abused,” Stubbs said. “I feel it’s a need to take care of them because there’s nobody else to protect them or defend them.”

With a supply of 6 million trees in Maine and Canada, Saunders said that Irving often donates trees to worthy endeavors. Irving plants 3 million trees annually. “I always have a little bit in my budget that I set aside to donate to various causes,” Saunders said.

He added that he was particularly happy to help out PAWS because of another personal connection he has to the non-profit organization. His teen-aged daughter Sophie is a PAWS volunteer. “My kid likes it over there. She likes cats and I like cats, too. The bottom line is I had a couple of cats growing up and I was awful fond of them and I think it’s a real good thing that those guys do,” he said. “It’s a cause near and dear to my daughter’s heart. Plus I know Connie and I knew her parents. They used to work with my mom and dad.”

“They live in a void right now because it’s open. All around it’s old farm field,” Saunders said. “The goal is for (the trees) to grow up and ultimately provide a windbreak to keep that place from getting buffeted by the wind. The other thing is it just makes it look nicer there. Everything always looks nicer with some trees around it.”

If the trees are well-kept, Saunders said they should grow about a foot per year over the next five years, although not all will survive. “Just because the world’s not perfect,” he explained.

Saunders said he and Irving are willing to step in and keep Valley Cat Haven supplied with trees until the young pines and spruce are able to serve their purpose. Saunders told PAWS volunteers, “You don’t have to worry about them.” He said he’ll give them new trees in the spring to fill in any voids if current trees fail to survive.

As the Maine Turnpike expects 1 million travelers alone over the Labor Day weekend, policymakers are gearing up for a sprint to solve one of the state’s most intractable problems: a long-standing — and growing — transportation funding gap.
Apex Weather END_OF_DOCUMENT_TOKEN_TO_BE_REPLACED

A cold front moved through the Valley early this morning, and it will be followed by an Arctic cold front this afternoon.
Campaign Corner END_OF_DOCUMENT_TOKEN_TO_BE_REPLACED

Tomorrow, Saturday, Nov. 3, 2018, U.S. Senator Angus King (I-Maine) will continue his Get Out the Vote initiative in Aroostook County.
Our Sponsors END_OF_DOCUMENT_TOKEN_TO_BE_REPLACED